Your #GroveCup pics, tweets and spreads keep the party going long after the Grove shuts down.

Share All sharing options for: Grovin' with the Cup: Feelin' Dandy, Beatin' Vandy

So the game was a little bit more worrisome than it should have been, but that didn't stop anyone from having a spectacular Saturday on another beautiful day in Oxford as the Rebs edged the Commodores 27-16. Night games are always a catch-22 situation in which there's no rush or worry to get to the Grove early but then there's not much time to celebrate the victory afterwards, especially with the new loose rule of the Grove "closing" three hours after the game's end. That didn't stop y'all from Grovin' in spades throughout the day and sharing with us some of your raucous revelry. The RCR squad was also in full force, bringing Jeff, Juco, Ghost, Zach Berry, Gray Hardison and yours truly together for a booze filled day of snarks and sharks. It's days like this past Saturday that remind me how great the Grove is in reuniting friends and family from all across the nation to gather in the spot that ever calls to celebrate great football, food, festivities and frivolity. Here are YOUR pictures and tweets!

Once you look past the chest hair jungle bungle this cupper is sporting, you'll also notice RCR's new dabble into the time honored Grove sticker tradition. More stickers are in production so stay tuned and be sure to slide up into my mentions in order to inquire where to find these glossy beauties.

Even the little cuppers in the Grove sometimes can't hold their apple juice. Hell, maybe half the strategy is spiking the cup in order to induce this sort of passive behavior so you can watch the game sans interruption. I guess this is the double edged sword of impregnating your wife to earn yourself a DD throughout football season.

Roger the Landshark dog is obviously ready to sniff out some sacks against Vanderbilt. 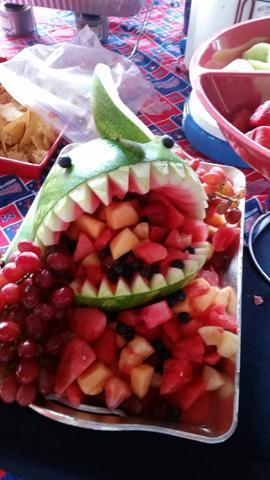 Speaking of sharks, @RebelHova showed us what it's like when a freak gene splice accident happens between a great white and a great red seedless watermelon. Shout out for the creativity and healthy eating choice amidst fried/cheesey everything.

Props on the picnic basket and THE first official state flag of Mississippi. #magnolia

Love this spread. You can never go wrong with rotel in phyllo cups (or on top of anything really). Very curious as to what's in the solo cups as well as the importance and relevance of the centerpiece pictures. If this is your spread, feel free to elaborate in the comments.

The day after Ghost and I had discussed the appeal of the city of Chicago's flag, @NurseEllenHere repped Chi-town in the Grove along with her handy dandy RCR koozie. Thanks for your continued Rebel support as #TheNetwork is always looking to further its reach into the bear controlled media markets of Laquon Paidwell's stomping grounds.

If the season plays out the way both fanbases would have it, Ole Miss could host LSU for the biggest Magnolia Bowl since Eli's senior season in '03. Why not get the hate started early? You plug #GroveCup, we plug your Etsy. Sounds like a pretty good deal to me!

Thanks to everyone for your submissions and be sure to keep your #GroveCup tweets coming next home game when the Rebs host New Mexico State for homecoming. Until then, stay dry in the swamp and Hotty Toddy!