Sikes Orvis has caused 1,298 gallons-worth of beer showers during his Ole Miss career

The student section throws a lot of beer every time Sikes slaps a home run. We set out to find exactly how much.

Share All sharing options for: Sikes Orvis has caused 1,298 gallons-worth of beer showers during his Ole Miss career

On May 12, 2012, I was sitting in the rain in the Right Field student section, bitching about Ole Miss baseball (which was losing, 4-2, in the ninth inning to a bad Tennessee team) and Sikes Orvis (a no-name, pinch-hitting freshman) was at the plate. Just about the time I was guaranteeing to a buddy that Sikes was gonna strike out again, he blasted a pitch over the fence in right to send an eventual Rebel win into extra innings.

613 at-bats, 173 starts and 33 dingers later, Sikes has played his last home game in Oxford. And, of course, every time he left the yard at Swayze (18 of his career 34 homers have come in the friendly confines), this happened:

Because we have way too much time on our hands, RF Hater and I set out to calculate, as accurately as possibly, exactly how much beer Sikes has sent skyward during his four-year career.

Here's how we did it.

(I don't give a damn about your process, just show me the results.)

Ole Miss lists the total attendance of every home game on its box scores, but figuring the student section crowd was a bit trickier. The school does track per-game attendance in Right Field (at least this year), but the baseball media relations dude wouldn't get back to us. But you know who did get back to us? Ole Miss Athletic Director Ross Bjork, because he's the man.

From that, we're able to calculate an answer to the question "Of any given home crowd, what percentage is in Right Field?" It's safe to assume that on the day that Swayze set its all-time attendance record -- 11,729 in 2013 against Bama -- the student section was at capacity. So take 3,000 from 11,729 and we're left with a baseline percentage of 25.6, which we rounded down to 25 percent.

So for each weekend game that Sikes slapped a dinger, we took 25 percent of the total attendance and assumed that was the RF crowd. We used 15 percent for midweek games, since those aren't as crowded as the recorded attendance numbers suggest (they're based on tickets sold, not actual attendance -- wasn't no damn 6,000 people at a cold Tuesday game against Arkansas State).

The average student attendance per game comes out to 1,970, which is right in line with the 2,000 that Ross told us was a normal crowd.

2. Calculate how many students actually toss their beer.

Of course, not everybody in RF participates in the shower (I'm looking at you, sorority sisters scampering down the hill like the damn Red Sea is crashing in).

Fortunately for us, resident athletic department photog Josh McCoy (who you probably know as @OleMissPix), happened to have an epic mid-shower shot from a Sikes homer during last year's regionals. So we zoomed in on a random selection of 100 students and marked which ones did and didn't throw their brews. If we couldn't say for sure whether they were tossing their cup or not, we just skipped over them. 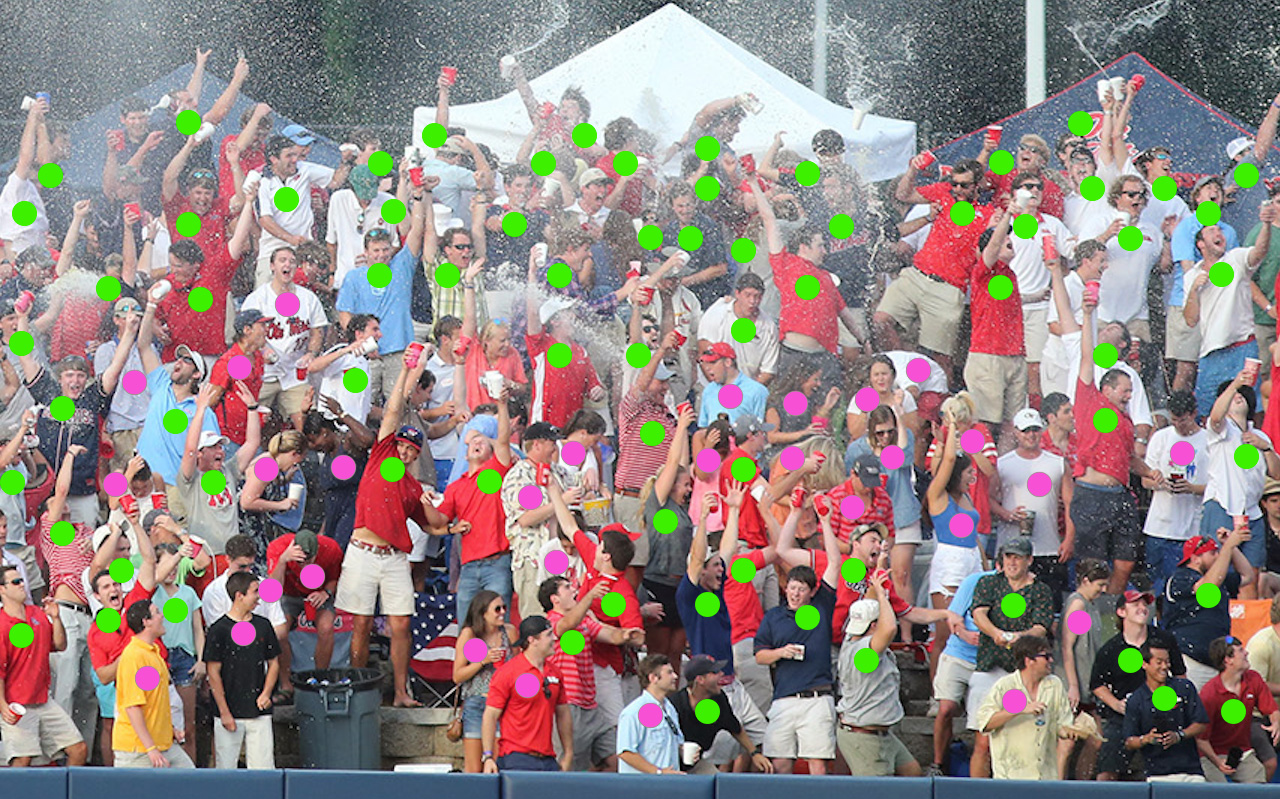 Hold up, hold up. What the hell is this bro doing?

Dude. Come on. Everyone else is in full party mode and you're bent over like some old woman looking for her keys. This is the point in the Miller High Life ad where the delivery dude comes in and confiscates your beer.

Anyway, 71 of those 100 students are beer tossing, which will be our assumed rate on any given dinger. Take 71 percent of the total 31,525 student attendance and we get 25,558 participating students.

3. Determine the amount of beer each student is throwing.

You know what sucks? When you've just finished pouring a fresh brew and Sikes goes and slaps a dinger on you. You don't want to wast a full beer -- you probably just blew $100 bucks at the Square last night and you're already on the verge of asking your folks for money -- but your buddy is gonna judge you if you don't. Screw it, you gotta throw.

Some folks might have a freshly-poured Solo Cup's worth of booze, while other folks might be down to their last few sips. So we'll just take the midpoint mark and say that on average, each cup in RF had 6 ounces in it (remember, its half of a 12-ounce can, not a 14-ounce Solo Cup). But when we think about it, nobody is showering with an empty cup, so let's instead set our anchor points at 1 ounce and 12 ounces. Pull the median of that and we get 6.5 ounces.

So here's our final equation:

And there you have it. Sikes Orvis has wasted 166,132 ounces of beer during his career.

Wanna check our math? Scroll through this Excel wizardry that RF Hater wrangled up (I told you, we spent way too much time on this).

Click here for full screen if you're viewing from your phone

That's a pretty damn big number, so let's put it in perspective, shall we?

The amount of beer Sikes has wasted equals...

I would have taken more math classes in school if this guy was my prof.