Share All sharing options for: Postgame Digestion: Ole Miss Falls 53-52 in Overtime to Arkansas in an Improbable, Embarrassing Way

American football looks like a really complex sport. Players serve very specialized roles on teams whose strategies vary a great deal. Rules and regulations change every year, and inform a pretty complex set of norms and standards for acceptable decisions and actions by both players and coaches. It's equipment intensive, almost gaudily so, and dripping with a culture of fan identity and traditions that make it incomparably diverse and odd.

But it's still a variation of the larger sport of football. It's still a game that involves two teams of 11 players moving a ball down a field towards an area that results in a score. The team with the ball is doing the scoring; the team without it tries to prevent this. There's a set time limit in which victory must be achieved. In the sense that a brand new S-Class Mercedes Benz and a 1980 Honda Civic are both "cars," the football we watch on Saturdays and Sundays in the United States is, in its spirit, as simple as the soccers and rugbys of the world. These games are all liable to have their outcomes being decided by amazing feats of athleticism, fortunate bounces of the ball, mental and physical mistakes made by players and coaches, and all of the other improbable situations that make watching these sports interesting. Coaches and players can scheme, plan, and practice to mitigate this unpredictability, but it can never be prevented.

Speaking nothing of what led to the contest coming to this point, Ole Miss lost a football game due to an amazing series of these improbabilities coming to fruition.

Things looked bleak for the Arkansas Razorbacks but they proved it's NEVER over until it's over!

The Razorbacks scored shortly after that, went for two, and got it (after a facemask penalty allowed them to try the conversion once more) to earn a one-point win. For Ole Miss, that was an improbable, heartbreaking, stupid and nearly inexplicable way to lose a football game. Had it happened in Ole Miss' favor, however, we'd be singing the "that's how the ball bounces" tune. And that's fine! Admitting that this is a game whose outcomes have an element of chance and fortune is honest and healthy. It sucks to almost constantly be on the receiving end of such misfortune, but when the misfortune is characterized by haphazard frivolity in an ultimately trivial situation, you get things like college football fans who, despite their claims to the contrary, will keep tuning in season after season.

Because, after all, it's just football.

Every fan handles dumb, devastating, unfair, inexplicable losses in their own way. Some brood and sulk. Some get mad and do things they regret. Some openly weep. Some have existential and identity crises. I took to twitter to see what it is that some of y'all like to do and, as it turns out, y'all like eating and drinking your pain away, among other strategies:

@RedCupRebellion Eating Chinese food in the airport, why

@RedCupRebellion gearing up for basketball season?

As for me, I'm writing this (a bad idea) and eating chips (a great idea).

Let's just talk about the defense here. We could look at individual moments and the decisions or actions they resulted in and from, and nitpick them with the idea that the slightest changes could have had the necessary effect of changing the outcome of the game, but that's largely fruitless. We could literally just begin and end that conversation with "if Arkansas doesn't score a two-point conversion in overtime, Ole Miss wins the game" and easily ignore every other moment that led up to that one.

So, instead, let's talk big picture and ask ourselves what in the hell happened to the Ole MIss defense? It was only last season, with many of the same players, that this unit was the top scoring defense in college football. Last night, Arkansas rolled their way to over 600 yards of offense and 45 points in regulation against a defense that we all thought would easily keep something that outrageous from happening. 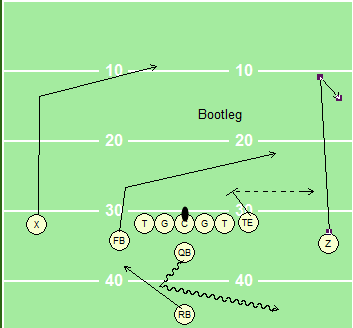 This is, more-or-less, what Arkansas ran with great success for much of the night. It's a very simple strategy that allows the quarterback to escape whatever pressure there may be and shut half of the defensive backfield out of any given play. It allows for H-backs, fullbacks, and tight ends (and, in the case of this diagram, the Z receiver), to get momentary separation from defenders. Arkansas didn't just run plays like this, so much as they thrived off of them. Brandon Allen was routinely escaping the Rebel rush while Hunter Henry, Dominique Reed, and Drew Morgan found plenty of space to get open in the secondary.

That was Arkansas' game plan, and Ole Miss didn't seem keen on stopping it. It wasn't that Ole Miss couldn't stop it - which may very well be the case - so much that the Rebel D didn't so much seem to try to stop it. The Rebs were somehow so unadaptable that the Landsharks literally let Arkansas do exactly what they intended to do for the entirety of the game. Arkansas wanted to slow the game down and deliberately eat up the field in chunks, moving the sticks with play action passes that usually included a rollout and a tight end release, and that's exactly what the defense let them do on every single drive. The look we gave them was broken, and we did nothing to fix it.

"Going Back for Seconds"

Here too I'd like to avoid digging into a few different topics and focus on one, because just as the "wha happen" style of defense was the story on that side of the field, Rebel quarterback Chad Kelly was the story on the other. His performance will be overlooked by a media that (correctly) wants to focus on Brandon Allen's leading the Arkansas offense, but Kelly was every bit as effective and arguably more dynamic as a legitimate threat to pass and run. His critics are sure to point to his past as a troublemaker and his present as a bit of a reckless gamer, but even his most ardent detractors can't deny that he's supremely talented and one of the few reasons that Ole Miss had some sort of chance at making this season a remarkable one.

Through the air, Kelly was 24-for-34 with 368 yards, three scores, and zero picks. On the ground, he rushed 10 times for 110 yards and an additional trio of touchdowns. That's a total of 478 yards and six touchdowns against an SEC West opponent, something which would be earning him significant attention were his team victorious. On the season, Kelly's tallied 3,229 passing yards and 23 touchdowns on top of 272 rushing yards and seven scores. That puts him on a pace to finish the season with 4,191 passing yards and 30 passing touchdowns as a part of a total offensive performance of 4,448 yards and 39 scores. If that were to happen, he'd top Eli Manning's single-season passing yards record (3,600 in 2003), Bo Wallace's single-season total yards record (3,701 in 2013), and Eli Manning's single-season total touchdowns record (32 in 2003). On top of that, his hypothetical 4,191 passing yards would be the second highest single-season passing total in the history of the Southeastern Conference, coming in between Johnny Manziel's 2013 season (4,114) and Tim Couch's 1998 season (4,275) totals.

Even if none of that comes to be, Chad Kelly's value to this offense cannot be emphasized enough. Yes, it does help that he has absolutely tremendous receivers - we doubt that he'd be putting up these sorts of numbers at, say, Vanderbilt - but few quarterbacks, even in the SEC, can so dynamically command an offense like Chad Kelly can.

If a digestif is supposed to aid your digestion and ease your stomach, then maybe this juncture in the season can be just that for the remainder of the year. Because of this season's expectations and beginnings, yesterday's second SEC loss marks the beginning of the end of the 2015 campaign. In an odd twist, Ole Miss fans today probably care as little about the outcomes of the final games against LSU and Mississippi State as they have in any winning season in Rebel football history. That's just how sobering a loss like yesterday's can be.