Postgame Digestion: The Ole Miss Defense is a Meal in its own Right

Even though the Rebels won by 21, the Memphis game is going down so smoothly.

Share All sharing options for: Postgame Digestion: The Ole Miss Defense is a Meal in its own Right

A good aperitif is supposed to whet your appetite before a big meal. It's a culinary preview of sorts that, ideally, you'll enjoy. But this week, our aperitif is going to put a bit of a sour taste in our mouths, as it's going to highlight one aspect of the Ole Miss vs. Memphis game that went terribly wrong (surprise!).

This week, let's lead off by talking about officiating. The officials for Ole Miss' 24-3 win over Memphis were, in a word, terrible. There were borderline "c'mon ref, let 'em play" moments, such as Laquon Treadwell's being flagged for holding on a Mark Dodson touchdown run. There were moments where they had to be reminded of the rules, such as the blatant intentional grounding non-call against Memphis which was flagged about 30 seconds after the fact once Rebel coaches and defenders spoke up. And there were moments when they forgot how to operate a game altogether - such as the Memphis' defensive substitution boondoggle in the fourth quarter that forced Ole Miss to call a timeout

But if you want a moment that really makes you say "wow, that's really shitty officiating," let's look at this play: 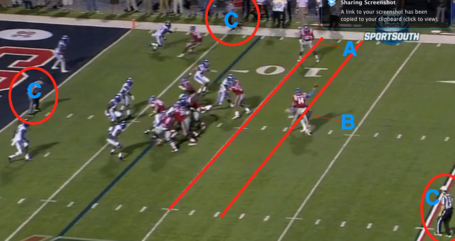 "A" marks Cody Core, standing on the 10 yard line. "B" marks Bo Wallace, throwing a forward pass to Cody from in between the 12 and 13 yard lines. "C" marks three officials who should have been able to clearly see this play. The pass was incomplete (c'mon Cody, haul that in), but it was initially ruled as a backwards pass and therefore a fumble. Memphis "recovered" it and took it 40 or 50 yards downfield.

That inexplicably stupid call actually happened in an FBS football game. I'm a bit stunned just writing about it a day after the fact. Of course the call was reversed, as it was too damn obvious to not reverse, but the fact that it was even made in the first damn place is bothersome.

But the officials did get a bit of a workout, and did make plenty of necessary and accurate call. Ole Miss and Memphis did commit a lot of stupid, stupid penalties that deserved the officials' attention. This game had some energy behind it, with Memphis' irrational hatred for Ole Miss colliding with a team fighting to honor the memory of Chucky Mullins. Emotions ran high and, as is wont to happen, football players used those emotions to do dumb, aggressive things.

Dr. Bo and Mr. Hyde
Bo Wallace threw two interceptions which were, as are most of his interceptions, really dumb. One could make arguments in his favor for both of them - the first one might have had a lot to do with a receiver slipping and Evan Engram could perhaps have caught the second pick had he jumped higher and sooner - but the threw them into really tight pockets of Memphis' zone coverage. So they were ill-advised regardless.

His good throws though, as they've been all season, were on point. He's a frustrating quarterback to be a fan of, but he does give this team the best chance to win every time he's on the field.

Special teams
Aside from one uninspiring punt, Will Gleeson was fine. The Rebs also covered punts and kickoffs very well, as they've done all season. But two missed field goals and a pair of muffed punts are not going to cut it against our competition in the SEC West. Maybe Markell Pack isn't the answer at punt returner; maybe Anthony Alford should get his reps instead. And one could argue that Gary Wunderlich, himself ejected for "fighting" in the first quarter, would have made those kicks that Andrew Fletcher missed, but the fact remains that the game was much closer than it should have been because of a few examples of poor special teams play.

"Going back for seconds"

The Landshark Defense
The whole damn group looked good. The defensive line was powerful and quick. They forced Paxton Lynch to move outside of the pocket and toss a handful of bad throws. The forced fumble on a Marquis Haynes pass rush is exactly what we expected out of the guy as soon as he committed. Robert Nkemdiche got a great push up the middle, as did Lavon Hooks and Issac Gross on several plays.

Serderius Bryant and Denzel Nkemdiche were fantastic at the stinger positions, combining for 3.5 tackles for a loss. Denzel was particularly effective against the run and sniffing out screen passes. One thing this defense does well - and this goes for linebackers and defensive backs - is not allow much in the way of yards after the catch. Last night's game was more of the same in that regard.

The secondary was exactly what they've been all season. They blanket receivers and knock the snot out of ballcarriers. Can't really ask for much more out of those guys, can you?

Overall, the defense held Memphis to just three points and a shade over 100 yards of total offense. Even with a wildly inconsistent performance out of the offense, the game was securely the Rebels' to lose because of how well the defense played.

Laquon Treadwell
The former five star prospect showed that he could do exactly what he was recruited to do. He had five receptions for 123 yards and two scores on the night, and generally overpowered the hapless Memphis defensive backs tasked with covering him. He also demanded so much attention that seven other Rebels were able to get open to receive passes on the evening, a fact which on its own makes him a shoe-in for most valuable Rebel in the passing offense.

Those powder blue helmets looked pretty damn good, didn't they? Here's a story from Austin Miller at the Ole Miss Sports mothership on how the helmet switch went down. What I found most surprising is how the players, coaches,and managers knew for several days that they'd wear the lighter-hued helmets and still kept it a secret up until the reveal.