Football finally returns as the Rebels head to Atlanta to face noted upset specialists Boise State in the Chick-fil-A Kickoff Classic. We've got all the info you need to get ready for the game.

The lowdown on the Broncos

This isn't your older brother's BCS bustin', Latter Day Saintin', sucker punch takin' Boise State. After nearly a decade's worth of dominance, they've now reached the end of an era under Chris Peterson (once thought to be an eligible candidate to replace Houston Nutt in Oxford) in which he led the team to two BCS bowl victories. Their new head coach is Bryan Harsin, the former Boise quarterback (interesting fact, the OC and DC of Boise are also Bronco football alums) and a second year FCS head coach recently hired from Arkansas State. But even with a new coach, Boise is still the favorite to win the Mountain West Conference Mountain Division as well as contend for the conference title and a 10-win season.

Boise returns 15 total starters -- seven on offense and eight on defense. On offense, the big names to watch out for are their senior play makers at the skill positions: Grant Hedrick at quarterback, Jay Ajayi at running back and Matt Miller at wide receiver. Needless to say, the playmakers are there to put up some points. However, similar to the Rebs, it's the offensive line that should concern Broncos fans. This year's O-line has just 23 career starts split between two linemen, one of those being star center Marcus Henry.

Defensively, the Broncos return eight starters, most of which come from their linebackers and secondary. However, it won't be a cakewalk for our skeptical O-line. While their D-line will be mostly new players, they all saw the field last year. As for the LB and DBs, Boise runs a 4-2-5 defense. While their two starting linebackers are both sophomores, they combined for 12 starts and 23 total games last year. It's Boise's secondary where things get a little spicy. I'm not gonna fault Treadwell for talking some swag leading up to this game but Boise's secondary isn't exactly something to sneeze at. Sure their corners are small in size, but their over the top safeties and nickel back are perfect patrons for a Dr. Bo malpractice lawsuit. Beware of safeties Darian Thompson and Jeremy Moane.

So what can we expect from Boise as a whole? My guess is some potential for big plays on offense -- if they can keep Hedrick upright against the Rebel pass rush -- and for the defense to sit back more often than blitz in order to force the Rebels to prove their gumption in the rushing game before allowing Dr. Bo to carve away with his scalpel to Treadwell and Engram. It's also the first game and defenses tend to have less pressure to execute than the offense and, considering both defenses seem to be better than their respective offenses, I'd expect a lower scoring game than Vegas thinks. Last I checked the total line was set around 54-56 and if I were a betting man, I'd take the under in a heartbeat.

- The Ghost of Jay Cutler

Ole Miss finished the 2013 season ranked No. 28 nationally in Football Outsiders' F/+ rankings (that metric explained here). That's not too bad for an 8-5 team, and it's right about where you'd expect an SEC team in year two of a rebuilding project. Boise State, who also finished 8-5 on the year, was ranked No. 45 by these same metrics.

So how did that happen? The big discrepancy comes in how Boise State's defense played relative to Ole Miss's. The Landsharks finished the season ranked No. 20 in the defensive F/+ ratings, earning a score of 12% (for comparison's sake, Florida State had the top defense in the country with 25.7%). The Broncos, on the other hand, were ranked No. 72 defensively at a -1.5%. On offense, the two teams were similar -- Ole Miss was ranked No. 41 with a 5.3% rating, while Boise State was No. 47 with a 3.9% rating. On special teams, the Rebels were abysmal, finishing the season ranked No. 92 in the nation and a -1.2% rating, whereas Boise State had the third best special teams unit in the country at a 4.7% rating. 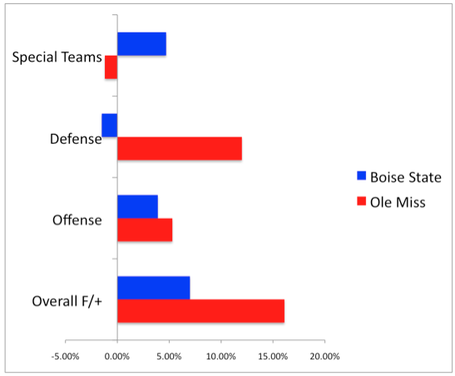 Get the inside scoop on the enemy from SB Nation's One Bronco Nation Under God.

If these three Broncos can take advantage of some of Ole Miss’s weaknesses, it could be a frustrating night for Freeze and the Rebels.

Boise State may be on the downswing, but they've been the ultimate college football underdog coming up on a decade now. Keep in mind what happened the last time they played a ranked SEC team in the Georgia Dome to start the season -- they not only beat Georgia in 2011, but handled them by two touchdowns. The Rebels' patched offensive line spouts leaks at center and right tackle, forcing a rushed Bo Wallace to revert to his turnover issues. Mistakes from Ole Miss's inexperienced special teams allow Boise to hang around -- a missed field goal here, a muffed punt there -- before a late return touchdown sparks the fatal lead change we've all been waiting for. Atlanta drunk tanks are filled with red and blue.

This is not the same Boise State team that went 84-8 between 2006-12, shocked Oklahoma in the Fiesta Bowl and took down Georgia three years ago. In their only two games against the Power 5 last season, they lost by a combined score of 76-29. The Ole Miss offensive line looks comfortable against a defensive front that lost it's only legitimate pass rusher to the NFL (Demarcus Lawrence), allowing Dr. Bo to get surgical against a secondary that ranked 88th in pass defense in 2013 (and hired the defensive coordinator from Texas A&M's god-awful unit). Laquon Treadwell baits the safeties up with the screen game, then hits a home run over the top to break the game open. The Boise O-line is replacing three starters -- two of them 2013 all-conference performers -- so Robert Nkemdiche spends the day flinging their replacements around like empties at a field party. Top to bottom, the Rebs are too big, too strong and too fast for the Broncos. Ludacris shows up and invites everybody to the after party.

If you're feeling like partying really hard and really fast, shoot a Prairie Fire made with potato vodka. This drink is a shot that can be prepared in many ways, but the classic Prairie Fire is a shot of vodka enhanced with a few healthy dashes of hot sauce. Typically it's something you'd have someone shoot on a dare or after losing a bet, but you should do it for the metaphorical implications of lighting the Idaho prairie on fire. What makes this particular version tough is that potato vodka is hard to find in the States -- most potato vodkas are made in Poland -- but Blue Ice is an American brand that we've seen at a few more well-stocked liquor stores.

To chase your prairie fires down, give Georgia's own Terrapin Brewery your hard-earned money in exchange for their beer, because all of it's really damn good (we like their Rye beer) and they just this past week announced that they'll begin distributing to Mississippi next week. If you're in Mississippi and can't get Terrapin (yet), get some cans of Southern Prohibition's Fireant. It's a solid beer that every Magnolia State denizen should be proud of.

A special thanks to @grantwill for the awesome graphic. Y'all make sure to give him a follow.