Snackbar: An Inside Look, Some Cocktail Lessons, and one of Oxford's Finest Cultural Establishments

Share All sharing options for: Snackbar: An Inside Look, Some Cocktail Lessons, and one of Oxford's Finest Cultural Establishments

During the summer lulls between the end of baseball season and the beginning of fall football practice, life here at the Cup can get pretty slow. Sure, we've still got the Tuesday question, Friday Forum and the newly instated #RCRmailbag, but there's just not a whole lot of Ole Miss stuff going on.

Oxford is the same way. As a local, life in Oxford is drastically different than when those young whipper-snappers come are in town. Jackson Avenue is traffic free, there are no lines at Kroger, and one can order a drink almost instantly upon arrival any bar on the Square. And speaking of ordering drinks, I've always been a big fan of Snackbar. With a drink menu that is constantly in flux based on the season and the bartender's mood, I wanted to learn more about the restaurant's unique style of producing some of the most eclectic libations this side of the Mason-Dixon Line.

"Hey," I thought. "Two birds, one stone. I bet I can get some fun summer content going on the Cup, and learn a thing or two about one of Oxford's best bars."

So I contacted Drew Stevens, the general manager at Snackbar, and he was gracious enough to allow me a backstage look at Snackbar and receive a private lesson on making some of their best drinks. In creating this piece, I talked to Drew as well as Alex von Hardberger and Brian Dorris, two of Snackbar's expert shakers and makers of the drink menu. They were incredible hosts and eager to share with us their mixological knowledge.

So here it is, our look at everything you need to know about Snackbar's drinks, food, and ethos, right here at Redcuprebellion.com. We've got brief interviews, some video lessons on a few cocktails, and some behind-the-scenes photos for you. We trust that you'll enjoy it almost as much as I enjoy a charcuterie plate washed down with a Seersucker cocktail.

What's your favorite drink to make?

Brian: The Old Manhattan. I love bourbon and this drink is the ultimate monster of bourbon drinks. It's a mixture of an Old Fashioned and a Manhattan. The flaming orange peel also makes it a unique drink to make.

Alex: For me it's the Classy Gent. There's a lot of fire involved and it just smells really good while you're making it. In general I like making any drink that smells good as you prepare it. Bless Her Heart is another example because it's made with basil.

How do you go about selecting the daily punch?

Alex: Usually it's a drink that might have been on previous menus or a drink idea that we want to try out and possibly add to future menus. Sometimes we'll have an excess of a certain liquor or kind of bitters so we just brainstorm a drink we could make. We try to make it something special because the more people that order it, the more it helps us out on busy nights when all we have to do is pour the punch instead of making it to order.

Brian: I can tell you mine for sure. Mine has to do with behind the bar and setting the bar up right so that you're gonna have a successful night. Just the small things like the mixing tins next to the ice bin where you're building a drink.

When it comes down to it, we are trying to provide people a break from their every day hustle and bustle and make them happy.

Alex: I wouldn't call mine a pet peeve because we are in the service industry and are here to make the drink that people want. That being said, people will throw terms around that maybe they don't completely understand and it will make your job harder. Perfect example: the martini. If someone comes up to me and says, "I want a martini." and says nothing else, I'm going to make a drink with gin, dry vermouth and a twist of lemon and serve it up in a martini glass. But it's happened so many times, I'll bring them that drink and they will exclaim, "Oh, I wanted vodka with no vermouth and olives." And there's nothing wrong with that, it's a great drink. But there are so many modifiers for all of the drinks out there so it's important for the customer to spell out some of the specifics.

Do y'all have a favorite work memory?

Alex: I've had a lot of cool nights here but one that sticks out was when Dan Aykroyd came through. I didn't really get a chance to talk to the guy but it was really refreshing because he was so nice. With someone like him who has been famous for a really long time, he was very welcoming to anyone that wanted to shake his hand or get an autograph. I found it really classy because I have served other famous people in the past and they were not nearly as humble and down to earth.

Brian: One night that sticks out to me was when [Ole Miss football] hosted Georgia. I want to say we had 490 people come through the doors between the hours of 5-11. It was downright insanity, the craziest night I've ever worked in a restaurant.

Drew: Yea it was a fun night. We were putting tables literally right next to each other. Our entire dining floor looked like one big table. I also liked the first night we opened back on April 15, 2009. We weren't really sure how the restaurant would be received and how everything would go. Then there was a fire in the kitchen and we had to deal with that for 45 minutes. But by the end of the night, I could tell that we were on to something special over here.

Do you prefer the craziness of football weekends or the relaxed vibe of summer?

Brian: Definitely football weekends. While it may be crazy and hectic in here, time flies by and before you know it, the night is over.

After the interview, I got a look at what makes Snackbar such a unique place to eat and drink. Part of the experience is knowing that they make almost anything they're able to with the limited space and resources they have. I got a chance to see the smokehouse, herb garden, and even the "experimentation room," which is where all the different house made bitters are stored until they are appropriately imbued with their respective flavors. Below, I'll share some photos with you of Snackbar behind the scenes, but before we do that, let's have a look at some videos I shot while receiving an in-depth view on how to make some of Snackbar's great drinks. First up...

This is one of Snackbar's most popular drinks. It's refreshing and delicious, and the honey-thyme syrup - one of the more than 25 cocktail ingredients made in house - gives the drink a uniquely Southern quality.

C'mon, you want to order that just to watch them set it on fire, don't you.

You know that commercial where the family is arguing about whether they should eat hard or soft tacos for dinner? And then a little girl asks "why not both?" Everybody celebrates and eats double decker tacos together? You know, this one? Well this is the bourbon cocktail equivalent of both. You can't decide if you want an Old Fashioned or a Manhattan, so you just say "why not both," and get the Old Manhattan.

The Pimm's Cup is a classic brunch or lunch cocktail, so if you're ever at Snackbar early - say on a Sunday morning after a football game - give it a shot.

In addition to Snackbar's drinks, they offer a wide variety of meats that they smoke and cure in house. I got a chance to take a peek at their herb garden and smoke house (which they share with their next door neighbor, Big Bad Breakfast) and the curing closet used for the meats that traditionally go on Snackbar's charcuterie plate. Below are some more behind the scenes pictures of how Snackbar operates and rolls out its awesome menu (click on the images to enlarge them): 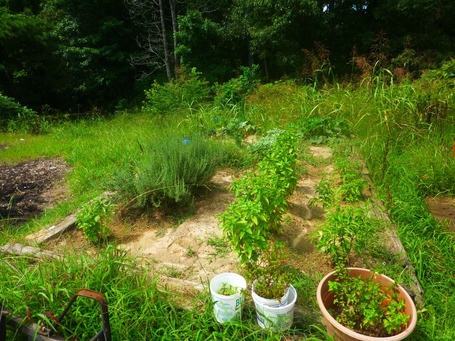 Snackbar's herb garden, so when they say they're putting fresh thyme in your Seersucker cocktail, you know they're not telling a tall tale. 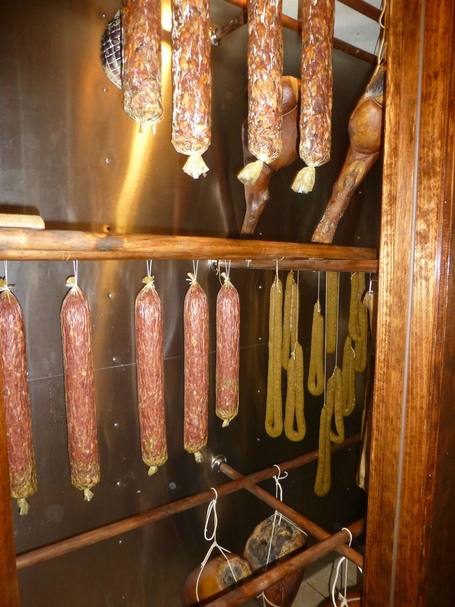 Here are meats being cured for the charcuterie plate. Some of these meats can take several months for them to reach peak flavor, but they are most definitely worth the wait. 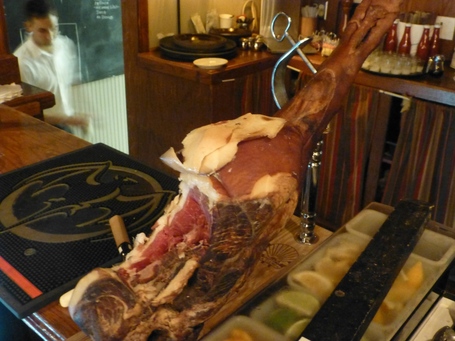 Carving up a cured ham. This ain't no Honeybaked ham, but rather more a Spanish-style jamón. This is one of those things that no photograph can really do justice to. It was such a beautiful piece of meat. 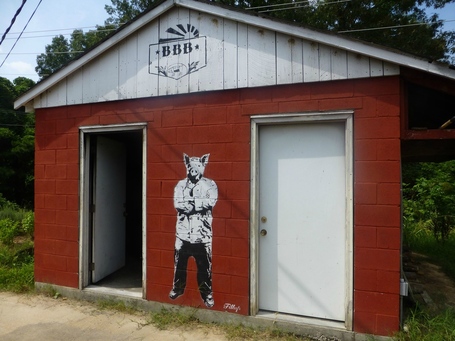 An outside look at the smokehouse. 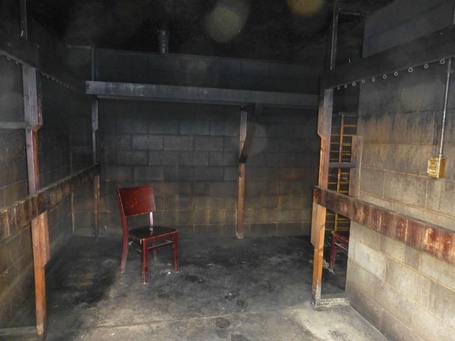 It's more spacious than you'd think. They can prepare hundreds of pounds of meat at once in here. 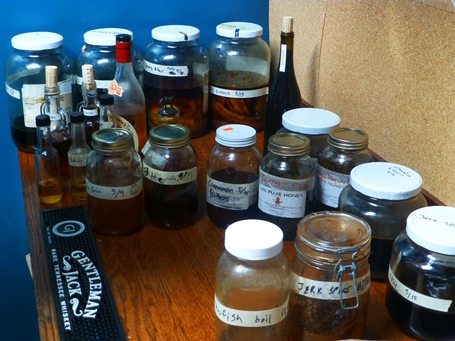 The bitters "laboratory," a.k.a. the back closet. I had to apply for G-level access and endure a 30-minute interrogation from John Currence himself to even step through the threshold of this room. This is really where a lot of culinary creativity is expressed, and all sorts of incredible flavors are dreamt up and created to add to whatever it is that you're drinkin'. In a sense, this photograph displays everything that makes Snackbar one of my favorites - it's a fusion of creativity, good ingredients, and a very slow, relaxed pace. Good things are worth the wait, and that includes cinnamon bitters, grainy mustards, and pâté.

Many thanks to Drew, Brian and Alex for working with me to make this happen. I had an indescribable amount of fun putting this together, and the experience has given me an even greater appreciation for the unique menu and atmosphere that Snackbar adds to the Oxford restaurant scene. If you haven't been there yet, fix that. Make a reservation for dinner or pop in during happy hour the next time you are in Oxford.

[ED: And our apologies with any technical difficulties you may encounter with the videos or photographs. That's all on us, not on Snackbar. They're great; we're not so much, but we're trying!]