It wouldn't be all smiles and rainbows, that's for sure.

Sometime earlier this month, the Ole Miss coaching staff tweeted at Rashad Roundtree, a four-star safety prospect out of Georgia. In this tweet was a photoshopped image of what his Twitter feed might look like were he to commit to the Ole Miss Rebels. That image looked a little something like this:

Roundtree tweeted his approval of the image, and SB Nation's College Football Editor, Jason Kirk called the move "the best entry" in the Tweet-something-Photoshopped-at-a-'croot game to date. We too feel that this is an excellent strategy to both catch someone's attention and use unique marketing to promote the Ole Miss brand. We do feel, however, that this rendering wasn't particularly accurate.

You see, the vast majority of Twitter isn't that clean-cut. It's a social network with hundreds of millions of accounts, most of which are characterized by crass, unclever, misspelled language, atrocious punctuation, and a severe dearth of any sort of logical thinking. No, Rashad Roundtree's Twitter homepage wouldn't look so much like that on the day he were to commit to Ole Miss; rather, it'd look something like this: 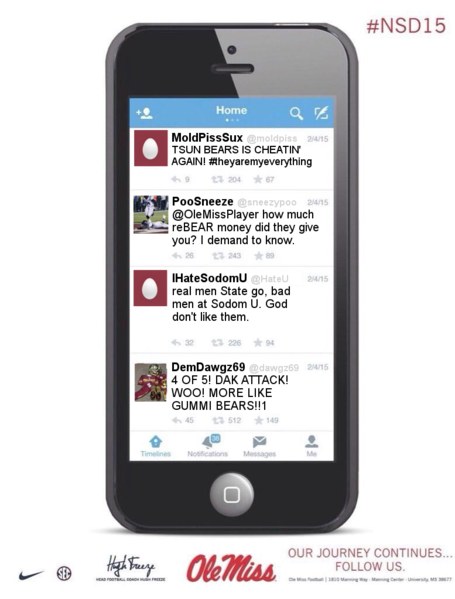