Hard hitting stuff in this week's mailbag, y'all.

Share All sharing options for: The Red Cup Rebellion Mailbag Answers Questions on Out of Conference Scheduling and Pooping

Here are this week's questions, all of which save for one were asked using the #RCRMailbag hashtag. If you've got a question you'd like this gang of idiots to answer, then use the hashtag and tweet away.

@RedCupRebellion #RCRMailbag with the new SEC scheduling non conference mandate, who would you like to see the Rebs play OOC in 2016?

Ghost: Any Pac12 team. The Rebs have never played a team in the Pac12, and if we're going to play someone from a big conference, we're probably going to have to schedule a home-and-home, so I'd like a destination game. Since I love the Bay area, let's just schedule Cal and call it a day. Or, since I've never been to Southern California, a date against UCLA wouldn't be bad at all.

Juco: UVA. It's usually a relatively easy win, and it would be cool to see the two fan bases mix. Also, I live in North Carolina and stuff.

Smeargle: My answer is strictly based on road trip attractiveness and affordability. The trip to Texas was such a great time and experiencing another gameday at a huge traditional football powerhouse was great. Based on this, I would definitely choose Notre Dame. ND is my 2nd team after Ole Miss (#catholic'd) and I attended a game there back in my undergrad (Pitt 2004). The student section was a complete blast (yes I got to get tossed up and down during the student section "push ups") and the sprawling campus is gorgeous. The only downside is tailgating: it's mostly a traditional "tailgate in a parking lot" with campus organization vendors selling food spread out around campus. I would love to make a return trip to cheer on the Rebs.

Juco: It's sacrilege, particularly from me, but I actually haven't loved the Faulkner novels I've read. If I had to pick a favorite, it would probably be As I Lay Dying. I'm a much bigger fan of his short stories. Barn Burning and Dry September are both wonderful, and I guess as short stories, they're likely undervalued anyway.

Ghost: I'm also going to not really answer the question, and say Old Man, which isn't a novel but rather a section - a novella maybe? - of If I Forget Thee, Jerusalem. It's a story of a convict who is temporarily released from Parchman during the 1927 flood to assist in a search for survivors and refugees. He rescues a pregnant woman from a tree, she gives birth, he's a jerk to her, and after the flood's over with he turns himself back in to Parchman.

There are all sorts of themes packed into such a short story, including Biblical allegory, themes of sexuality and misogyny, themes of class and wealth - but what I find to be the story's most thought-provoking image is that of the flooded, swollen Mississippi River itself. It's described as this mindless behemoth, slowly meandering southward, consuming everything within its reach along the way. It's both awe-inspiring and legitimately terrifying, serving as a callous reminder that nature has no particular regard for humanity.

Smeargle: I've only read about 2-3 Faulkner novels and they were all for classes. I was always more of a Harry Potter and Malcolm Gladwell-esque non-fiction fan.

Ghost: Oh gosh, there are SO many good ones to choose from. If I'm picking one, though, I'd definitely go with the one that perpetuates the idea that we all operate in some clandestine, conniving manner to get what we want. We're the Illuminati meets the Stonecutters meets the CIA as far as our secrecy and ruthlessness go. All throughout the state are secret networks of incredibly wealthy bagmen, collusion between Ole Miss university officials and corrupt politicians (themselves naturally Ole Miss alumni), and agents operating within media outlets to control some sort of pro-Rebel narrative.

That last one is probably my most favorite theory, because I've seen it trotted out by Bulldog e-crusaders after the New York Times publishes a travel piece on Oxford or after CNN airs video of Anthony Bourdain's visit to Mississippi - a visit which naturally had an extended stop in Oxford and nary a whiff of Starkville. Instead of understanding that people just aren't that interested in Mississippi State or Starkville, they have convinced themselves that the media they see and (struggle to) read is a part of some plot to convince recruits to sign their LOIs for Ole Miss.

Juco: I think my favorite source of criticism, and the one I'm the most excited is attributed to us, is that we dress up for stuff. OH NO! WE'RE NEVER UNDERDRESSED! WHAT AN INSULT TO OUR SOULS!

Smeargle: Probably just the idea that Ole Miss students/fans are WORLDS APART different from MSU students/fans. Let's be honest, the majority of both student bodies love to hunt, Greek it up and drink. Ole Miss just does the latter two better. The other is the mere idea that we get all riled up over them calling us Black Bears/Teddy Bears, etc. Maybe some lesser intelligent fans are still butthurt about the mascot situation but I'd like to think any fan with an IQ greater than that of a cinder block just wants to win football games. 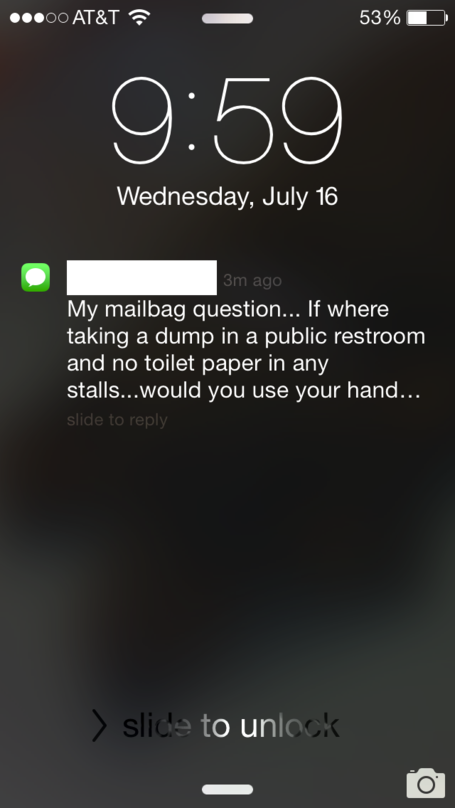 Ghost: I'd whip a fresh hundo out of my wallet and wipe with that. Money ain't a thang.

Smeargle: When I imagine a public restroom actually running out of toilet paper, I picture one that is rarely managed and cleaned, i.e. rest stops, campgrounds, etc. After working at hippy summer camps in Colorado, I am very comfortable with BIFing (Bowel in Forest) and the idea of Leave No Trace.