The second half of Smeargle's adventure in Omaha.

Share All sharing options for: Ole Miss at Omaha: Part 2

My last full game day in Omaha rivaled that of the first. Where it lacked in bourboning and camaraderie, it made up in a day filled with family, good food and a Rebel victory. We started the day at the Omaha Zoo. So I never knew this (well duh because we haven't been to Omaha in 42 years) but the old Rosenblatt stadium is literally the current parking lot for the Omaha Zoo. When the CWS was moved to TD Ameritrade, the Zoo bought out the land for the stadium in order to develop the space for parking. Realizing how important Rosenblatt stadium was for the city and returning fans of the CWS, the Zoo opted to place a memorial miniaturization of the park with bits and pieces (location of homeplate, seating, dug out benches, etc.) from the original stadium. There are also markings of real distance bases and foul poles. You might have seen this tweet of Bianco when the team visited the zoo and him recreating a fist pump when he jacked one for (TEAM NAME REDACTED). 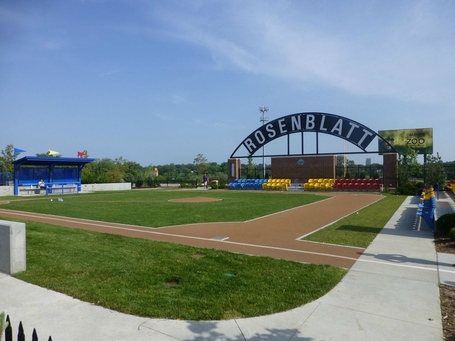 We spent a good time at the memorial and even longer at the zoo. I've been to plenty of zoos in my day: San Diego, New Orleans, MS public schools...Omaha definitely ranks up there as one of the most impressive. However, due to the fact that we got to the BEAR CANYON area of the zoo right around high noon, most of the animals were napping in the shade, so my first black bear sighting didn't come until the baseball game (man I'm good, put me up for a blog pulitzer). 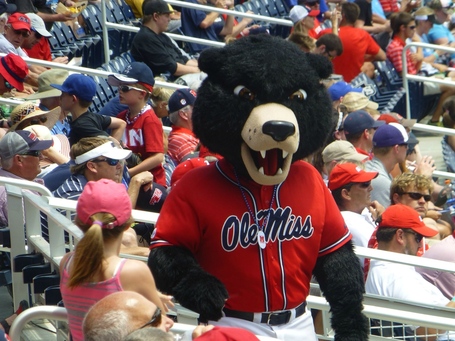 Before the game, I was able to grab a VIP pass for a free lunch (your subscription fees at work) at the CWS Fan Zone. The zone itself was fun but pretty light on fans. I did get a chance to sit down at the Buffalo Wild Wings sports bar and grab a beer with a local. Not to sound cliche or repeat what most of y'all have already heard, but he was rooting for Ole Miss. "I've been coming to the CWS for 30+ years and Ole Miss has got the IT factor. The only team that rivals you is Virginia and maybe Vanderbilt. Sucks that you and UVA are in the same bracket." Bro you don't have to tell me twice. 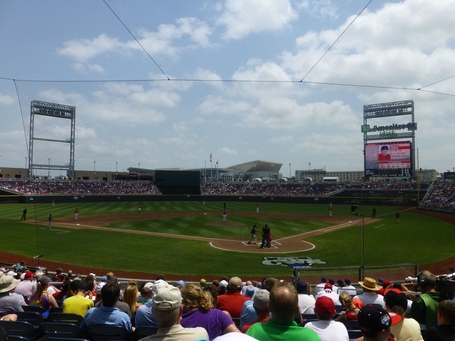 Not too much to say about the game. Y'all all watched it and went through the same emotional roller coaster that I did. One of the highlights was some Tech woman three rows back asking my 5'3 sister to sit down when John Gatlin was coming up to bat in the bottom of the 9th. "You can still root for your team while sitting down." While my southern genteel kept me from doing so, I wanted to turn around and say, "WE DIDN'T DRIVE 12 HOURS TO COME AND WATCH OUR REBELS WHOOP THAT TECH ASS WHILE SEATED!" She left pretty quick after the hit, so I wasn't able to point to this and laugh in her face. 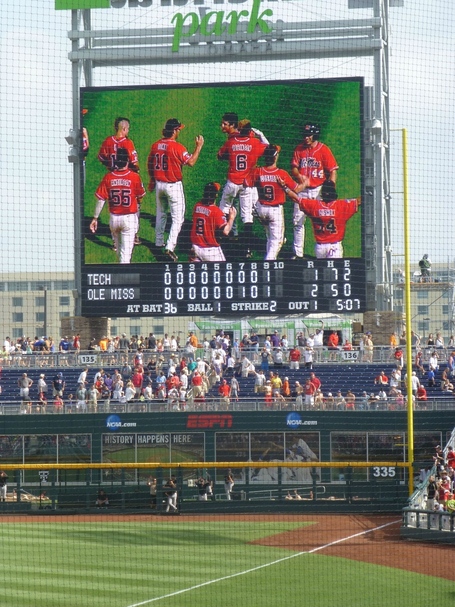 Looking back at both games, it was very strange to be sitting around fans that just didn't give a damn. At Swayze, you can easily give a high five to anyone sitting within a 3 foot radius. However at Omaha, I was the only one yelling in my entire section. I had a couple of Ole Miss fans join in once they had a ring leader but man, it was just odd sitting right next to someone that was on their phone for the entire game, not watching a single pitch or play. DON'T YOU REALIZE WE HAVEN'T BEEN HERE IN 42 YEARS??? WHY DIDN'T YOU WATCH ANY OF OUR REGIONAL OR SUPER GAMES? THIS IS A BIG DEAL. These Omaha guys just love them some good baseball, albeit not necessarily the actual teams. I guess I can't blame them. Post game, we waited by the buses to cheer on the Rebels. 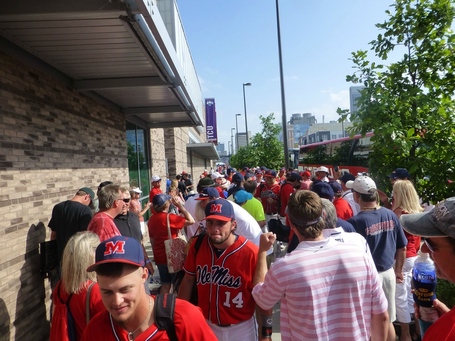 After cheering on the team, we hit up the souvenir shops to grab some CWS swag. Because it was between games, there were a lot of scalpers on the streets selling tickets for the UVA/TCU game. When I declined an offer for some tickets, the scalper was insistent that Ole Miss fans hang around: "Just keep winning baby! Once you and Texas lose, it's gonna be a ghost town around here!" It was a nice compliment to Rebel Nation and how much our fan base turned out. 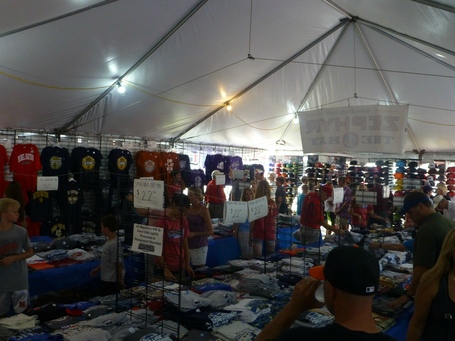 The shops were great, I got a swagged out Adidas golf polo with the Ole Miss and CWS logo and one of the umpteen hundred T-shirts available that had all 8 logos on it. The funny thing about the souvenir shops was that as soon as a team was eliminated, ALL of that team's merchandise was immediately marked down 50%. I literally was in line to buy my Adidas polo for $60 and a Tech fan heard the price, began to walk away, and the sales guy yelled, "Oh wait! Half price." But then I was all like "Ha, we just beat y'all. Go cry into your Adidas on your drive home. I'm wearing mine to the next game." (Shhhhhh, I'm already back in Oxford, don't tell him guys.)

That night, what better way to celebrate our victory than to dine at an authentic Omaha steakhouse? Similar to asking an Oxonian the best place to eat/drink on a game day weekend, asking an Omaha local about the best steakhouse will yield about a half dozen different answers. We settled on Brother Sebastian's. 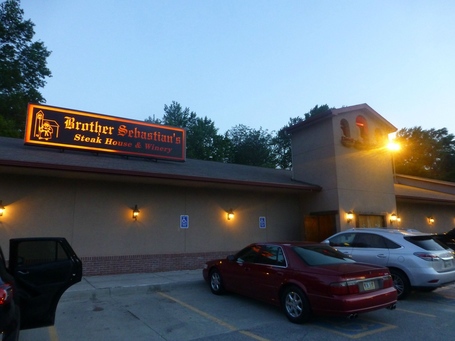 The local we talked to warned us not to be weirded out once we first pulled up to the restaurant. I wasn't sure what he meant but realized once we stepped out of the car; monk-like chanting was piping through loud speakers from the "bell tower" across the parking lot. It literally sounded like the intro music to the original HALO (and I know I don't have to link that for y'all #oldschoolgamers). The ambiance was great though. Our waitress wore a onesie with a monk-like hood and leggings while every room was themed (The Contemplation Room, The Library, The Wine Cellar, etc.). Pictured below is my medium-rare ribeye with bacon green beans and "loaded" sweet potato. Because who DOESN'T want brown sugar and toasted marshmallows on their sweet potato? 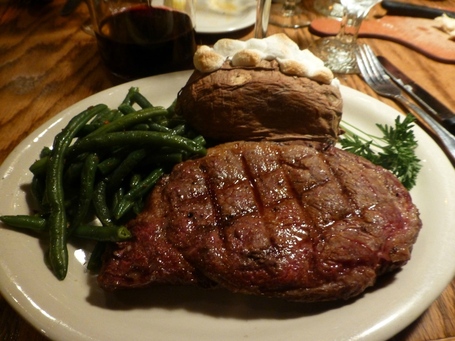 All in all, this trip was amazing. If you couldn't make the trip this year for whatever reason, God bless you and hopefully we won't have to wait another 42 years to return. Good luck tonight Rebs, go dehorn the toads. Hotty Toddy.