Should Ole Miss have pitched around Virginia's Mike Papi in the 9th inning?

Virginia's best batter delivered a walkoff hit against the Rebs on Sunday night. Should Mike Bianco have given him the opportunity?

Share All sharing options for: Should Ole Miss have pitched around Virginia's Mike Papi in the 9th inning?

With two outs in the bottom of the ninth inning of Ole Miss's opening game of the College World Series, Virginia had a man on second with their best hitter, Mike Papi, at the plate. The score was knotted at one apiece. With reliever Aaron Greenwood on the mound and first base open, Rebel head coach Mike Bianco had three options in front of him.

Option A: you stand the catcher up and give Papi, a 2013 All-American and recent first-round draft pick by the Cleveland Indians, a free pass to first base.

Option B: you pitch around Papi, hoping he'll chase a bad pitch. You don't give him anything to hit, and worse case scenario, you walk him.

Option C: you get aggressive and pitch to him.

As you're likely aware, Bianco chose Option C, and Papi hammered a full count changeup deep into the right-center gap for a walkoff win. As a result, Ole Miss will now have to reel off four consecutive wins to make it into the finals, an improbable task at best.

Bianco said on Monday he didn't regret the decision. But was it the wrong call? Hindsight of course tells us it was, but given the circumstances, should Bianco have pitched around Papi? Should Greenwood have been pulled in favor of a lefty? Should that final pitch have been farther outside?

A rock and hard place

The problem with walking Papi was that Joe McCarthy, the Cavs' second best hitter, was on deck. Walking Papi had already backfired once -- after the Rebels pitched around him in the fifth inning, McCarthy delivered a two-out RBI single to give Virginia a 1-0 lead. On top of that, Papi was 0-2 with men on base that night and had already stranded two runners in scoring position.

"You feel uncomfortable pitching around [Papi] to get to McCarthy," Bianco told Chase Parham of Rivals after the game. "We did that last time, and McCarthy got the hit."

Still, taking your chances with McCarthy seems like the better bet. Papi is second on the team with a .315 batting average (McCarthy is third at .305) and leads the club in RBIs and slugging percentage. He entered Sunday's game batting .408 in tournament play.

Should Greenwood have been pulled?

There have been some, including ESPN analyst Kyle Peterson during the live broadcast, that said lefty Wyatt Short should have been inserted to face Papi and potentially McCarthy, both of whom are left-handed.

I'm not so sure. Greenwood hadn't allowed a hit over his first 1⅔ innings, and he'd been dominant in previous tournament appearances against Washington and Louisiana-Lafayette. One of the criticisms of Bianco over the years is that he relies too often on matchups, so I was pleased when he elected to stick with the hot hand instead of reaching for the lefty-lefty pairing.

"We were short (of lefties) in the bullpen," Bianco said. "Aaron was close, just a pitch away from getting out of it. But Mike did a good job of staying on that ball."

Here's the final battle between Greenwood and Papi:

For those of you who don't know, pitches are called almost exclusively from the dugout in college baseball. That means the above pitch sequence was dictated by Bianco, who said after the game his intention was to "pitch [Papi] tough," which is coach speak for not giving him anything easy to hit.

To his credit, Bianco appeared to try to keep the ball away from Papi for most of the at-bat. Three of the six pitches were fastballs outside the zone, and the two changeups were on the outside edge and trailing away. The only ball over the middle was the 2-1 fastball, and that one was intended to be lower in the zone judging by where catcher Will Allen set the target.

Having thrown four consecutive fastballs in the upper 80s, Greenwood turned to a 79 mph change with outside movement for the payoff pitch. It cut across the plate, and was just outside of the zone and trailing away when Papi connected with it. 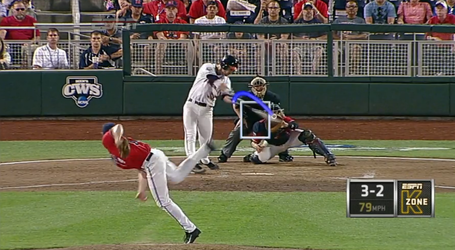 For what it's worth, this was Peterson's commentary just before the final pitch:

If you're going to throw the fastball here, I think you have to throw it in. Just based on the 2-1 swing you saw from Papi. That was the spot that he seemed like he really didn't want it in there. If it's out away from him, he can put a better swing on it.

Was it Greenwood's fault?

One scenario that we haven't discussed yet is the possibility that Greenwood simply missed his spot on the final pitch. For all we know, Bianco wanted that pitch a foot off the plate and Greenwood left it too far in.

There are a couple reasons that theory doesn't hold water. For starters, Greenwood had already thrown two pitches over the plate earlier in the at-bat. If you're willing to challenge Papi early in the count, you're probably willing to do it again with a full count.

Secondly, Allen's glove positioning behind the plate suggested that he wanted it close to the zone. Initially, he sets up just below the knees on the outer third. 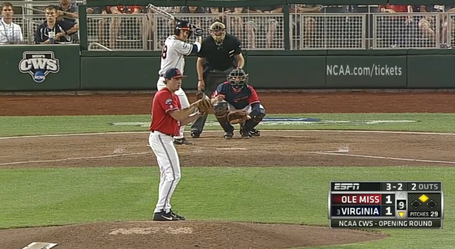 But just before the pitch is released, Allen shifts his target to thigh-level, just off the plate. 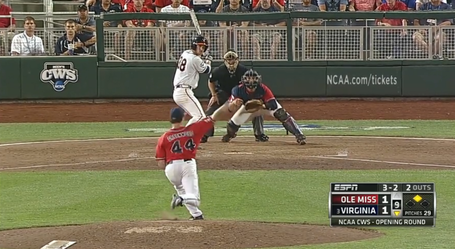 Greenwood leaves it slightly high around the waist, but it's right where he wants it on the lateral axis. 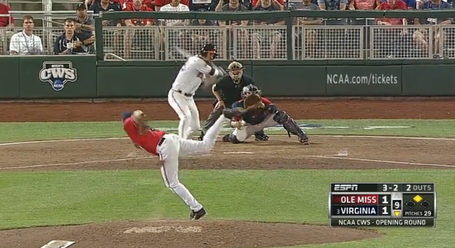 Here's Aaron Fitt from Baseball America on the pitch (ignore the fact that he calls it a fastball):

Just watched replay of Papi's game-winner. Really not a bad pitch—a fastball on outside corner. Impressive Papi got extended & turned on it.

I don't believe Papi should have seen a pitch to hit. I think Greenwood should have stayed outside out of danger and taken his chances with McCarthy.

That's not to say I think it was a bad decision on Bianco's part. Given that McCarthy had a dangerous bat on deck and that walking Papi had already backfired once in the game, there's certainly a credible argument for pitching to him.

In the end, a good pitch was beaten by a great hitter. Though the Rebels had their chances to steal a win, Virginia was the better team on Sunday night, and you can't hang the loss on one at-bat. Papi's walkoff was the Cavs' eighth hit of the game. Ole Miss had just one. That's not a recipe for winning baseball games.