Here's the first part in a little photo journey in Omaha.

The trip to Omaha was, in short, fantastic. Here's just a small taste of the goings on of the College World Series, and how much fun the Ole Miss Rebel faithful were having this past weekend.

My first full day in Omaha started with a morning jog around my hotel. It was a sunny and 70 degree morning as I trotted around a local park in a futile attempt to offset the calories I would later consume that day. I even got a bit teary-eyed while jogging when I had a realization of where I was and what I would be doing later that night. We were finally in Omaha, and it felt so good.

After I returned to my hotel room, I played the waiting game with my wife as we planned out the rest of the day. My wife LOVES to plan, and is really good at it too. She has mapped out many a road trip and planned plenty of vacations for us and family. However, like any football game day in Oxford, our priorities are a tad different. Hers include looking smokin hot (most important), figuring out where to park, talking to our tent group about who's bringing what and cookin up the best sausage balls this side of the Mississippi. Mine is a simpler list: getting to the Grove and bourboning (yea I just made that a verb). So I, as you can see, ain't much of a planner. Plans or no plans, however, I wasn't yet ready for the spectacle and celebration of baseball that is the CWS.

Pulling into downtown Omaha, we saw that the area definitely had a really old school feel to it. All of the buildings are built with old brick and the roads are all cobblestone. There were also what looked like thousands of Ole Miss fans walking around and dining at every restaurant you could see. We decided on Upstream Brewing Company for some food and drink, which was a great choice. I kept things light and had some calamari and thin crust BBQ chicken pizza, both of which were delicious. 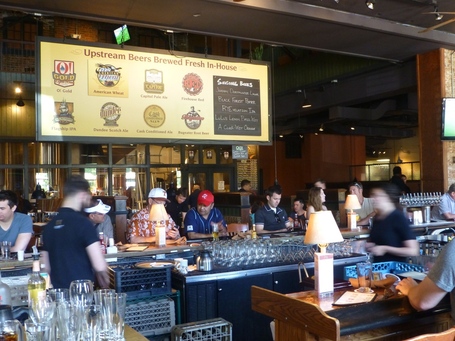 The beers, all of which are brewed in house, were out of this world. My favorite was The Clock-Wit Orange, a beer brewed with blood orange. It rode that fine line of being bitter with hints of sweet and had a smooth finish. 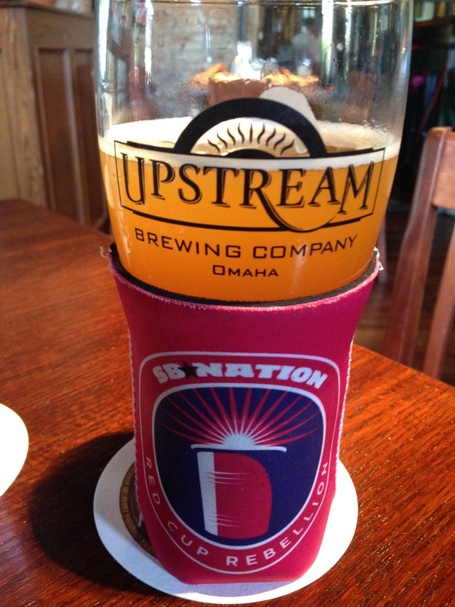 Looking back, I enjoyed our time down town and the meal we had at Upstream Brewing Company, but I just can't help but get a little antsy when I know there are fellow Rebels doing some good ole fashioned bourboning just down the road. So I enjoyed my meal, but was really distracted. We had to go to the park, and good beer and pizza wasn't going to hold me back.

Once I got to the area around the ballpark, I went ahead and did what all Ole Miss fans know how to do best: mooch off of bourbon that wasn't mine. I even went as far as to fill my flask (may it rest in pieces) for later. But seriously, right after I took this picture, I dropped my flask and the top broke off. It was super old and I bought it at a discounted rate from the Hallmark store that used to be on the square (yea I told you it was old, that's gotta be what, 10 years?). It was discounted because of the misprinted Phi Kappa Alpha engraving, so yea, I was the sole Phike from Ole Miss and had the flask to prove it, but no longer. 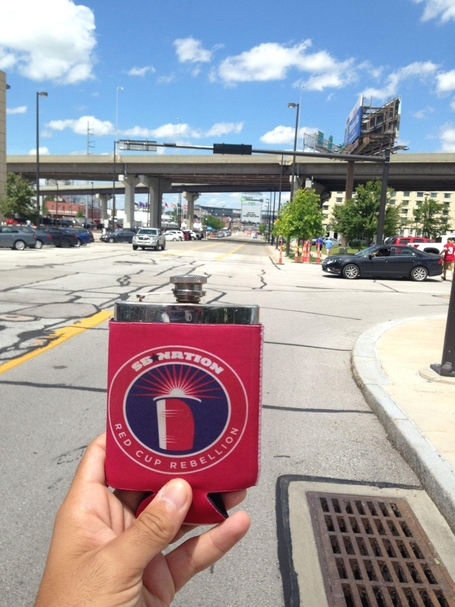 The tailgate was a huge success. What we lacked in typical Grove pageantry and gourmet food we made up with lots of bourbon, music and camaraderie. We were located right on the main drag to the stadium so lots of fans passed by. Even non-Ole Miss fans would give us a quick Hotty Toddy as they walked by. Shout out to Joe of Joe's Craft beer in Oxford that also swung by and gave me a delish IPA. Go give him your business.

After bourboning for a couple hours, a bourbon run was needed. We took a little walk downtown to find a liquor store. Our first stop was at a wine bar/liquor store that sold Bulleit for $32. Sorry but just because you can sell $50 bottles of wine to Mr. Figgins and his cohort of wine snobs doesn't mean you should do the same with your run of the mill bourbon. Instead, we made our way to Cubby's. 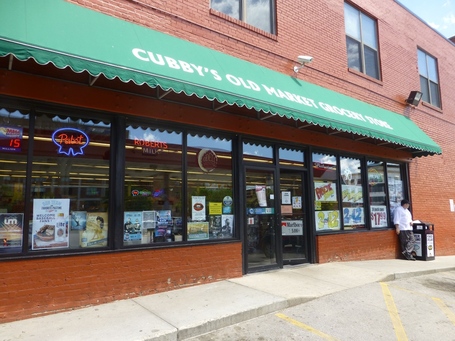 Imagine this: a gas station that had beer, wine, liquor, and groceries - pretty much the ultimate stop of convenience. It also had Maker's Mark for $28 in a locked glass case so you know the rest of the NON-LOCKED UP bourbon would be affordable.

And who locks up Maker's Mark anyway?

After returning to the tailgate, nearby was another Ole Miss spot with some cornhole. Juco and I partnered up and got our tails whooped good. After talking to our competition for a while, we noticed they had a powder blue RCR koozy! Whaddya know? Some fellow cuppers! We introduced ourselves as Juco and Smeargle from the blog at which time the guy confessed, "Oh I just thought this koozy looked cool so I stole it from a friend. What's the SB stand for in SB Nation?" #facepalm So Juco and I split a whole humble pie between ourselves in more ways than one. 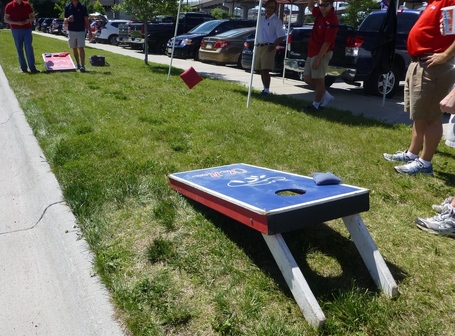 With about two hours before first pitch, we headed to the Blatt. Conveniently located across from TD Ameritrade, this bar has a rocking atmosphere and overpriced beer. 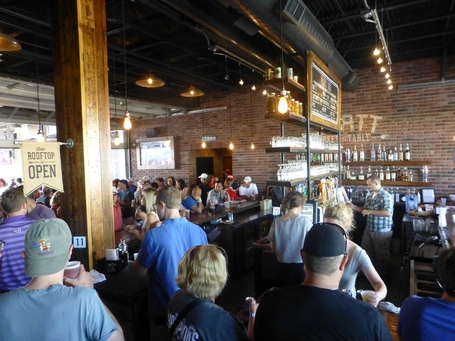 The main attraction of the bar is the rooftop. Fans gather there to overlook the stadium entrance and people watch. If only you could see the field from the rooftop a la Wrigley, this place would be even more clutch. I got the most bang for my buck per this blue ribbon award winning craft brew. 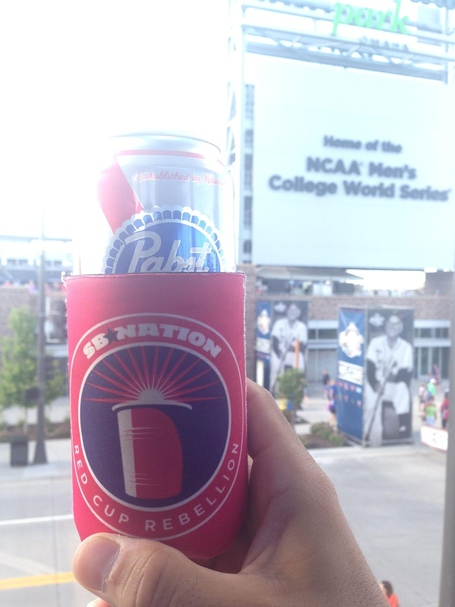 There's not much to say about the game that you haven't seen or read so I'll just leave this pic of my seats. 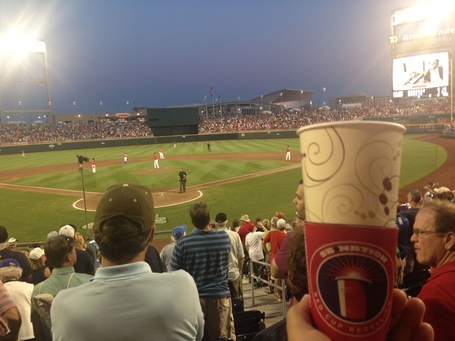 Yup, 15 rows behind home plate. It was amazing. While it hurt to lose, the game and experience was still out of this world. I yelled my lungs out and got some odd looks from locals with chants of "BALL FOUR" and "THROW IT IN THE DIRT".

So I had so much fun, that I'll be here for our second game as well, and hope to bring y'all some more insight to the fan experience at Omaha. Whether you made the trip as well or had a big watch party, share your own experiences in the comments below. Until then, keep those heads up Rebels. At the very least, we ain't losing this party.