Lacrosse: big sticks, small balls, fast hits, deep digs. We've got it at Ole Miss, and smeargle's got it covered.

Probably like most of y'all, my experience with lacrosse was limited to seeing college games on ESPN The Ocho as I was flipping channels. The only lacrosse player I ever knew was a major broseph who carried his stick around campus with him as a pick up line. ("Oh! What's up with that sticky thing with a net on top?"....."Oh this ole thing? I play lacrosse babe, let's go find a room." Maybe I'm jealous because it's a bit harder to carry around a video game controller/keyboard hanging from your backpack and even harder to get a girl to bite at that bait. But I digress.) 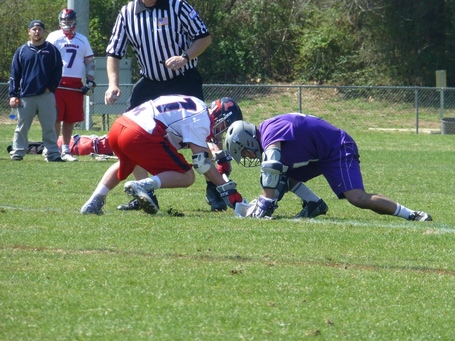 I wasn't really sure what to expect when I met with Mac and Kyle of the Ole Miss club lacrosse team. If you've lived in MS or read my last 360 article on Ole Miss hockey, you'll remember me touching on the fact that hockey did in fact have a big enough following in MS and the south that meeting a southern hockey player wasn't too big of a stretch. As for lacrosse, the only school I knew to have a lacrosse team back in high school was a small private school in Jackson. Other than that, you have to travel north of the Mason Dixon line for anyone to even know how many people are on a lacrosse team (it's 10 by the way, 9 fielders and 1 goalie).

Last week I sat down with Kyle Hayes (#20) and Mac Ford (#1) to get schooled on lacrosse and why it's actually a really fun sport to play and watch (They didn't bully me into the girl's bathroom and give me a swirly, even though they totally could have and I probably deserved it). Kyle is a junior marketing major from Long Island, NY who started at a Div 3 school his freshman year and later transferred to play lacrosse at Ole Miss his sophomore year. Mac is a senior finance manager major  from Baltimore, MD and is the team president in addition to a four-year team member.

How and when did the Ole Miss club team get started? It started about 20 years ago when it wasn't as nearly as competitive as it is now. About seven years ago we joined the Men's Collegiate Lacrosse Association (MCLA) which is the big club association nowadays. We started out in the Great Rivers Lacrosse Conference (GRLC) which consists of teams such as Indiana and Missouri. Then about five years ago, we moved into the South Eastern Lacrosse Conference (SELC) which is the "SEC" of lacrosse. There are about 20 teams in the the SELC but within our division are Georgia, Georgia Tech, Auburn, Vanderbilt and Alabama. Those are our division rivals that we play year in and year out. The level of competition is really high for club play.

What are the costs of playing club lacrosse? What about sponsors and fundraisers? The team is fully funded by the players themselves and the club dues everyone has to pay. It's very important that every player does their part to pay for their membership. It's $1,500 for freshmen and new players to the team and for returning players, it's $1,100, mainly because you don't have to pay for new equipment. The dues help pay for league dues, travel expenses, and all of the necessary equipment. I know $1,500 sounds like a lot, but it's really not that much compared to other club programs. A club like Arizone State is paying around $4,400. Regarding fundraisers, our head coach is from Long Island along with a lot of the team members and we put together a big fundraiser in NY over the summer. A lot of the people up there are excited to give some money to help grow the sport back down south.

Regarding practice, could you touch on your practice schedule leading up to a game? On a game week, we practice Monday from 6-8, Tuesday 5-6, and Wednesday 6-8. Then on Thursday we watch film on other teams from 5:15-6. Away games are about the same except for Fridays we load up on the bus to leave town. Typical game weekends anyway will have 2-3 teams play round robin style. It's a lot of fun to host teams in Oxford and it's not hard getting teams to want to travel here due to the reputation Oxford has for being a great college town.

Do y'all show the other teams around Oxford? Yes, for example, the first home weekend game we hosted Kentucky. It was a lot of fun to meet up with them on the square Friday night, just hangin out with their team and getting to know their players. Then the next day we battled it out on the field against them.

Could you talk about your away schedule? So far we've travelled to Lafayette, LA to play University of Louisiana-Lafayette and Texas. In two weeks we travel to Auburn, then two weeks after that we travel to Atlanta to play Georgia Tech and UGA the next day in Athens. Last year we played in the All-State Sugar Bowl collegiate lacrosse series in New Orleans against Texas A&M. For our roster of guys mostly from the northeast, that was a blast for us get down there and experience New Orleans.

Speaking of your roster of mostly northeastern guys, what's the out of state representation on the team? I was surprised by the amount that goes into Ole Miss Hockey recruiting, is there a similar aspect for the lacrosse team? Well there aren't many division-1 schools with a varsity lacrosse team so the next step if you want to play lacrosse at the college level is go to a smaller division 3 school or play at the club level. Given those choices, for me, it makes more sense to go to a bigger school and still be able to play at a competitive club level. So I went on to the Ole Miss lacrosse website and filled out a recruiting interest form. The recruiting coordinator at the time talked to me and convinced me of the perks of playing at the club level and here I am. Nowadays, because our lacrosse season conflicts with their own schedules back home, we don't have a set date for all recruits to come and visit. Instead, whenever a recruit is able to come down for a visit, we show him the town and introduce him to the team. It's a great advantage to have most of our team from the northeast because potential recruits already have something in common with our current team.

What's the closest state representation on the team? In the south, the closest would be Louisiana, Florida and North Carolina. Other than that, you're looking at guys from New York, New Jersey, Connecticut, Pennsylvania and Maryland with California and Texas splashed in there. We are able to pull a bunch of kids from some of the top high school programs in the country and that helps us to keep up with the high level of competition at the club level.

What other lacrosse teams are your main rivals and why? Bama is always a great game along with Auburn. Pretty much anyone in our division, those games end up being pretty competitive.

What's a typical season like? Has the team been successful? What are some accolades worth noting? A typical season is about 12-14 games, all depending on the budget and how many games you can afford to play (referee fees, travel, etc). We try and get as many home games lined up as possible so our friends can come out and support us. We also try and set up some scrimmage games against local division 3 schools such as Rhodes out of Memphis.

If there was one thing you could say to any of our readers to plug and convince them to come out for some Ole Miss lacrosse games? It's a really exciting sport. It's the fastest sport on two feet and most people here haven't had the chance to see it in person. I think if they came out and saw it one time against one of our rivals they would really enjoy it. There are hits,goals...it's a combination of football, basketball and hockey all rolled into one sport. 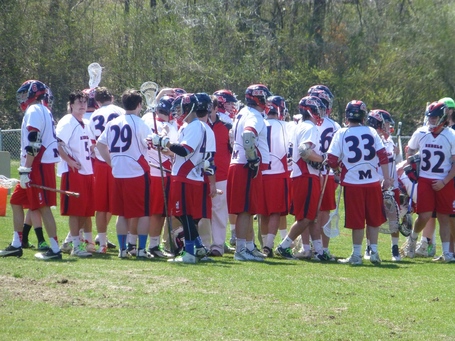 The lacrosse games are held at intramural fields, and this past weekend was a beautiful day for any outdoor sport. As for the game, they weren't lying; I had a helluva fun time watching. The game was very fast paced with lots of contact. It reminded me a lot of hockey, except on grass and with much more fighting for possession over loose balls. Loose balls on the ground turned into a giant divot party as opposing players tried to dig out the ball and gain possession. I was also surprised by the constant yelling of plays from the sideline and coverage assignments from the field.

To my untrained eye, it seems the most skilled position on each team is the goalie. Imagine standing in a net armed only with a stick that has an over-sized head and pocket. Aside from his stick, the only other pad that sets him apart from the other players on the field is a chest protector.

Aside from his stick, the only other pad that sets him apart from the other players on the field is a chest protector. This seems slightly insane considering other players are hurling a ⅓ lb. rubber ball at you at very high speeds.

This seems slightly insane considering other players are hurling a ⅓ lb. rubber ball at you at very high speeds. Despite that, the Ole Miss goalie made some crazy stops with his stick and un-padded limbs. Shout out to freshman #17 Walker Sawers from Baltimore, MD. Sick moves, bruh.

The other players that stuck out were senior #2 Connor Kelly from Pottstown, PA and one of the guys I talked to earlier, Mac Ford. Connor and Mac were the main "attackmen", hanging out behind the net to set up plays or rushing in towards the crease to get open for a shot. Apparently Connor had a crazy season last year with 83 points (56 goals and 27 assists). Dude, I'm sure I could score half that many points in ten lifetimes of playing lacrosse...don't get too full of yourself.

My only guess as to why lacrosse isn't that popular is because of the lack of exposure the local chirruns have to the sport in contrast to the buffet and obsession with football here in the south. After our interview, Mac, Kyle and I talked about the idea of offering some clinics/camps to some of the local elementary and middle schools in hopes of instilling an understanding and appreciation of the sport. It also starts with YOU, the Ole Miss fan, student or supporter, to go out and show some love to the lacrosse team next time you happen to be around for one of their games. Their home games are done for this season, but I will be trying to get the word out next Spring as a kind reminder to send some love their way if you want to watch some high speed, high action LAXing. Hotty Toddy.