Have you ever wondered what exactly it is that the Ole Miss rifle team does? What is NCAA riflery anyway? Smeargle will fill you in for this edition of the 360 Rebels Tour

While hunting may be a big hobby for many Southern ladies and gents, some women at Ole Miss take gunplay a step further by competing at the NCAA level through women's riflery. Knowing that a lot of Ole Miss fans are aware that the rifle team exists, but don't know much beyond that, I thought to ask around and see what exactly this team and its members are involved in.

Thankfully, I got a chance to ask freshman sharpshooter Alison Weisz some questions about her experience as a member of the Ole Miss Rifle team, and I couldn't have hoped for a better Reb to speak with. Ali is the first Ole Miss freshman to qualify for the NCAA Championships in addition to garnering Great America Rifle Conference (GARC) All-Conference accolades. In other words, she had a great season, successfully representing Ole Miss at a number of competitions. 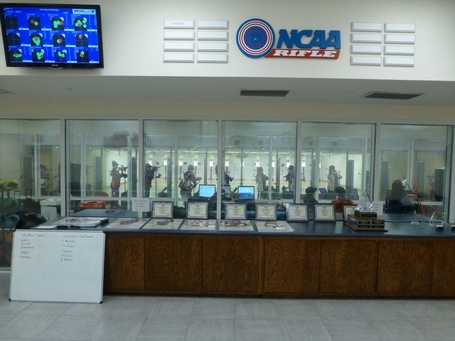 Where do you call home? Belgrade, Montana

What's your major? Nutrition and Dietetics 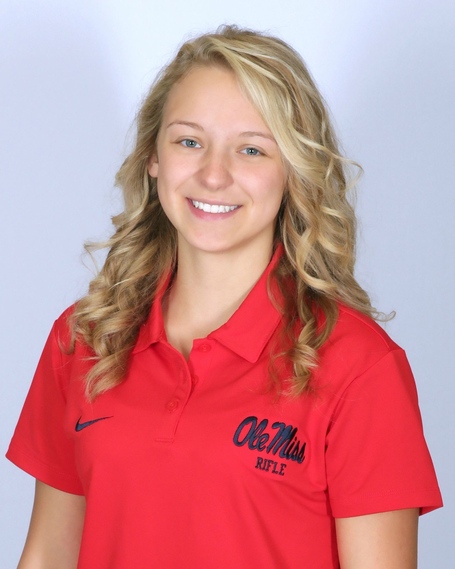 I've taken some time to learn the basic rules of riflery, but could you briefly explain what your typical competition looks like to someone who's never attended one? Very complex. It's a much different atmosphere than that of other college sports. It tends to have a more serious aspect to it because there is no rowdy crowd or a whole lot of physical movement, it's much more calm. It's similar to golf; you want the players to keep their concentration. There is some cheering from the sideline but the players can't really hear it.

At what point did you realize you could compete at the college level? As soon as I found out there were rifle teams in college, I knew that's what I would be doing, so only a short time after I started.

When did you begin to participate in competitive riflery and at what level? I began air rifle at 13 years old competing at both the state and national level. Then I started smallbore rifle at 16 years old at the state level.

Did you compete during high school through your school or private tournaments? I mainly competed individually around the state and nationally but also a little bit as part of a club team. In the beginning, it was a lot of state 4H matches, but as I got more competitive, it turned into more national NRA and USA shooting qualification matches.

What does an average week leading up to a competition look like for you? My week generally revolves around a complex training plan depending on what it is I need to focus on during practice prior to the match. It also consists of schoolwork that I try to complete before the match so it isn't too much of a burden.

Does Ole Miss women's rifle have a "rival?" If so, what school and why? Our team doesn't exactly have a "rival"; we simply want to win no matter who we are competing against.

Do you plan to pursue rifle after college? Yes! I plan to continue to shoot the national matches for which I am eligible.

I got to see Ali compete live when Ole Miss took on Nebraska and Jacksonville State here in Oxford. My first challenge was actually finding where the rifle team competes. The Ole Miss website lists that the matches take place at  Patricia C. Lamar National Guard Readiness Center, a place that, after several years living in Oxford, I still wasn't sure existed. Google Maps wasn't helpful either. After further investigation and exploring, I found the place. It is right off of Sisk Avenue near the new Malco movie theatre. So, if you're looking to take in a rifle competition, take the Sisk exit off Highway 7, and follow the signs pointing you towards the site. The range is actually connected to the Oxford Convention center, across from the Hampton Inn. (You're welcome.)

The competition building consists of an observation room, a coaching/score keeping room, and then the range itself. With 12 ranges, teams can split up their shooters in any combination. During the Nebraska vs. Ole Miss match, the range was split 6/6. However, when Jacksonville State came in along with more Nebraska shooters, the range was something like, 3/7/2. From the observation room, one can follow the shots on an overhead screen which tracks the location of every shot by each shooter as well as their most recent shot (in red). 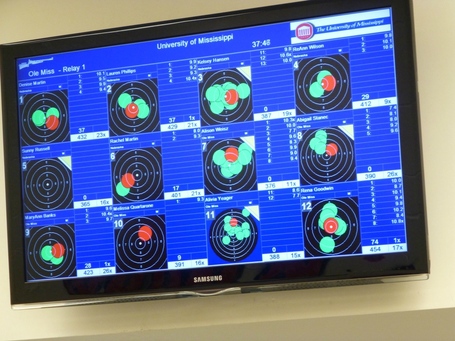 There are two categories of competition: smallbore and air rifle. During the smallbore, athletes have a respective time limit to shoot 20 shots each from three different positions: prone, standing, and kneeling in that order. Scoring wise, shooters receive 10 points for a bullseye that touches the very center dot in the middle of the target. The more center their shot is over the dot, they receive additional "points" (10.8 is more center than 10.2) that are only counted for the sake of breaking a tie. From the bullseye, points decrease by one point for every ring outside thereafter. While there were six shooters per team at a time, only five pre-declared competitors are actually scored and counted for the aggregate team score in each category.

After the smallbore round, Nebraska led by 17. Between the two rounds, there was a small break for the girls to come out to the observation room and relax. It was pretty funny to see the girls go from a completely in-the-zone "shooting" mode to a light hearted one, chatting about what they did over the weekend, what is going on in school - typical student stuff.

Next was the air rifle category. In this round, competitors have 115 minutes to shoot 60 shots, all from the standing position. Even though the Rebels closed the gap in the air rifle category, it wasn't quite enough to seal the upset over the No. 5 Huskers as the Rebs fell 4,643-4,637. If you paid attention to the scoring description, you'd realize that's the difference of SIX shots, among all five competing shooters, being on the next ring out from the bullseye instead of on the mark. Talk about a game of millimeters. 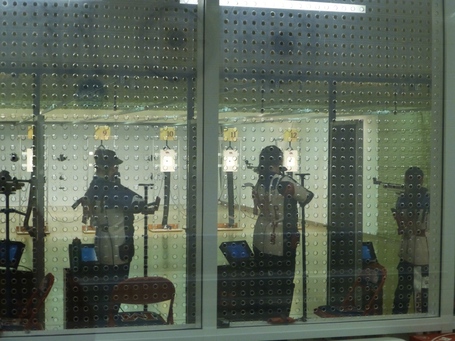 Many thanks to Kyle Campbell, Kim Ling, and Ali Weisz for taking the time to help me put this feature together. Be sure to check out Ole Miss Rifle next season! I've now covered two club sports and a varsity sport, and I'm loving it. See you on the next stop of the Rebels 360 Tour.