This Spring is certainly shaping up to be an interesting one for Ole Miss. Hugh Freeze is dealing with logjams at a couple of positions, while scrambling to find bodies at others. Freeze has recruited well the last couple of years, but the majority of the starting lineup in his first two years has been filled with sleepers and overachievers. Now that two full, star-studded classes will be competing for playing time, some of these less heralded veterans will find themselves at a crossroads. In this article, we’ll talk about five guys who have much to gain (or lose) over the next month.

Signed in 2011, Collins Moore was ranked as high as the #9 player from the state of Alabama. Moore played early, though he only caught 4 passes for 69 yards in his true freshman year. In 2012, Hugh Freeze's first year, Moore was pegged as the favorite to start in the slot, but missed most of the season due to shoulder injuries. Ja-Mes Logan slid into the slot, to facilitate having Moncrief, Sanders, and Logan on the field at the same time. All three of those players returned for 2013; with the addition of Laquon Treadwell, Evan Engram, and Quincy Adeboyejo, and the emergence of Jordan Holder, Moore found himself primarily contributing on special teams.

With Moncrief, Logan, and Holder gone, and with Treadwell vacating the slot position, Collins Moore has an opportunity to see more passes come his way in 2014. He'll have to fight off Adeboyejo, who has moved into the slot, as well as Q Burdette and incoming freshman Markell Pack. Moore's battle will not be an easy one, but he's shown good hands, toughness, and appears to be a solid route runner. Hugh Freeze has stated that he likes to rotate as many as 8 receivers, but through two years, he's kept his rotation considerably tighter. Expanding that rotation might be Moore's best chance. 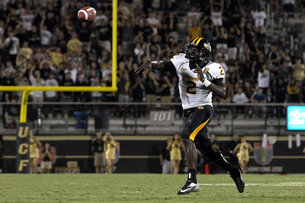 Former USM quarterback Anthony Alford will get a long look at safety.

A last-second addition to Hugh Freeze's patchwork 2012 class, early reports on Quintavius Burdette were really optimistic; he was an immediate contributor on special teams, and later came off the bench at safety. Coaches praised his athleticism, and in 2013, Burdette was moved to cornerback. His early progress, plus a tenuous injury situation at the position, gave Q the early starting nod at corner, along with Dehendret Collins. Burdette seemed to struggle in coverage, and as Senquez Golson and Charles Sawyer got healthy, his snaps dwindled. When Mike Hilton and Derrick Jones emerged as viable options, Burdette seemed to disappear completely.

Q has been moved to wide receiver headed into the spring; coaches hope that his raw athleticism and toughness will serve to bolster the depth of the receiving corps. It would be surprising to see Q draw a starting role, but he's a guy who has displayed promise from day one, and the coaches seem to like him and want to find a good fit for him.

Channing Ward was by a wide margin the highest ranked player that Hugh Freeze landed in 2012; a raw but prototypical defensive end from tiny Aberdeen, MS. After being cleared by the NCAA in the midst of Fall practice, Ward showed up a little out of shape and a little behind. Still too talented to keep on the sidelines, he showed athleticism and aggression in relief of CJ Johnson, EJ Epperson, Jason Jones, and Cameron Wigham.

Ward's relative lack of progression from 2012 to 2013 was a source of frustration for many Ole Miss fans, especially in the midst of an injury-riddled season in which Ward was one of just a few healthy options. Ward registered 24 tackles and one sack in 2013, compared to 21 and 1.5 in 2012. Ward is a guy that many fans especially want to succeed; Freeze's first true blue-chip signee, a kid with an NFL body, plucked from what many would consider a MSU-leaning town. The passion, aggression, and big hits that Ward has shown in limited snaps and special teams play have made him a fan favorite in spite of his position on the depth chart.

Ward has been moved to tight end heading into the Spring; in some ways, this is a head scratching move, and in other ways, it makes sense. A guy who can get down on kick coverage at 270 pounds is certainly an intriguing prospect, and that kind of size/speed combination could be useful if Ward has some body control and pass catching ability. Alternately, he could be at TE as a blocker; he does seem like a guy who could chip block a defensive end, then go destroy a linebacker. At the same time, Ward's slow progress at DE is rumored to be a matter of understanding the scheme, and TE is arguably a more "heady" position. He'll not only have to commit the offense to memory, but also learn blocking technique and route structures.

Ward's situation remains a huge toss-up, and to speculate too much is useless. Suffice it to say, he's one to keep an eye on.

This might be Conyers' best chance to assert himself as a three year starter at center, instead of a career backup at tackle.

Conyers enters the Spring as a strong candidate to win the starting nod at Evan Swindall's vacated center position. Conyers was signed out of Miami in 2012, picking Ole Miss over listed offers from Vanderbilt, West Virginia, Michigan State, Illinois, and others. Conyers has spent some time as a backup at both tackle positions, though he's only actually played in five games. Giving Conyers an early shot at center is a nod to Matt Luke's efforts to make the 2014 offensive line more athletic than its 2013 counterpart. It is assumed by most that Conyers will represent at least a modest upgrade in athleticism over Swindall, but his consistency and intelligence are unknown quantities. Bad snaps, which seemed to plague Ole Miss at times before Swindall's tenure, can totally kill an offensive drive, and Hugh Freeze won't tolerate a new center that doesn't help keep the offense "on schedule."

This might be Conyers' best chance to assert himself as a three year starter at center, instead of a career backup at tackle.

Mike Hilton has certainly had an interesting career so far. As an undersized, undervalued prospect, Hilton started five late-season games at Huskie as a true freshman in 2012. When the absurdly talented Tony Conner took over that spot in 2013, Hilton emerged as a viable starting cornerback, notably having a great game against Texas in his first start. Unfortunately for Hilton, Ole Miss just keeps upgrading the talent level in the secondary. With the presence of a very solid Senquez Golson, the emergence of Derrick Jones, and the upcoming arrivals of Kendarius Webster and Tee Shepard, Hilton is going to be competing against several guys who are bigger and perhaps more physically gifted. Hilton appears to have a great mental game, excellent body control and positioning, and is extremely aggressive. At this point in his career, he's not a guy you should bet against.