The Rebs outscored the Bulldogs by 21 points in the second half to advance in the SEC Tourney.

Taking full advantage of a hot shooting Marshall Henderson in the second half, the Ole Miss Rebels overcame a double-digit deficit to win by a double-digit margin against Mississippi State in the SEC Men's Basketball Tournament at the Georgia Dome in Atlanta. The final score was 78-66, a win that is even more impressive when you consider that, with just under 17 minutes left to play, the Rebels trailed 51-38.

Marshall Henderson and Jarvis Summers each had team-high totals of 21 points. Summers also put numbers all over the box score, tallying six assists and four rebounds to boot. Demarco Cox led the Rebels in rebounds with six, while Anthony Perez and Sebastian Saiz both totaled five.

If you want a comprehensive story of the game, take a look at this game flow (that I had to draw up in Microsoft Excel because ESPN.com doesn't include them in their recaps anymore): 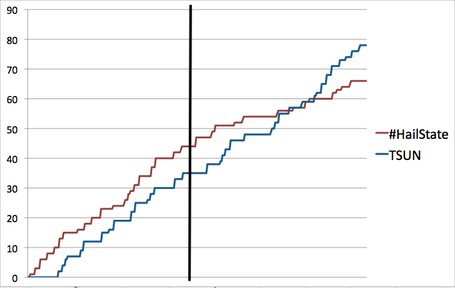 You've got the Bulldogs jumping out to a double digit lead, then maintaining it for most of the game before going limp in the middle of the second half. It was a tale of two vastly different halves, really, with so much of that having to do with Marshall Henderson's shots dropping with increased frequency as the game went along.

The Rebels will now face the other Bulldogs of the Southeastern Conference, as they take on Georgia tonight at 8:30 PM Central. We'll preview that and have an open thread for y'all this afternoon.