We go the inside scoop on the effect to the school's first SEC win of the year, Brandon Allen's passing ability and, most importantly, Bert's new beard.

We sat down with Ryan Higgins of SB Nation's Razorback blog, Arkansas Fight, to get a feel for Ole Miss' upcoming opponent (make sure to give him a follow on the Twitters). If you so desire, you can check out my own answers to his questions -- which the good people of Arkansas Fight DID NOT LIKE ONE BIT -- right here.

1. How do you think last week's win over LSU will affect the Razorbacks this weekend? Was it a positive confidence boost or the makings of an emotional letdown?

Ryan: It had been so long since the Razorbacks have won a game like that, I have on idea how they are going to react. I know LSU upset Ole Miss, but I think the Rebels are the superior team. Vegas has the Rebels as the favorite, so if the Razorbacks lose it won't really be a letdown. I'm sure some fans will be mad, but I'm not going to get upset about losing a game they weren't suppose to win in the first place. Hopefully, it's a confidence boost they need to pull an upset.

2. Brandon Allen has put up respectable numbers this season and was a big part of last week's win. Grade his performance this year and talk about what he does to either help or hinder -- or both -- the offensive game plan.

Allen is the toughest player to grade because of the lack of weapons he has on the outside. I would give him a B- up to this point in the season. Certainly, he hasn't down right lost any games for the Razorbacks, but he has crumbled in the clutch. Because of that, I can't give him much more than a B-. I think the receivers are what hinder the offensive game plan. Finally, the game plan has become throw it to the tight ends and running backs and basically forget the receivers. I know a lot of his supporters have been screaming, "where the Allen haterz this week?!?!" Yeah, because people are going to complain after their first SEC win in over two years. If they still made the NCAA Football video game, he would be about an 80 overall and a 0 in the clutch category. The beauty is that if the Hogs can establish the run game, that's all he needs to be.

3. Arkansas's defense was very aggressive against LSU, especially on third down. Can Ole Miss expect more of the same, or was that just the product of playing against Anthony Jennings's sorry ass? 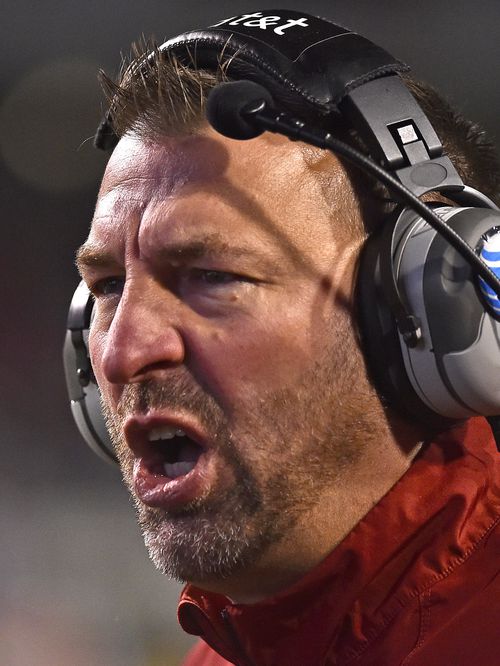 Les Miles could go to the intramural fields at LSU and probably find a better quarterback. Obviously, Arkansas isn't going to be able to stack the box and stop the run. However, Arkansas' corners made some outstanding pass breakups against LSU. Rohan Gaines was ejected in the third quarter against the Tigers, so he will be forced sit the first half on Saturday. Josh Liddell didn't miss a beat as a substitute and the Hogs will lean on him to have the same type of performance in the secondary.

4. How big of an impact did Bret Bielema's beard have on the LSU win?

It was clearly the deciding factor. He can't shave until the Hogs lose. It's a better superstition than the windbreaker that went 0-17 In SEC play to start.

5. Outside of Georgia, your defense has fared pretty well against power run teams (you held Alabama, Mississippi State and LSU each to 17 points or less). On the other hand, you've had trouble against up-tempo, spread offenses like Auburn (45 points) and Texas A&M (35 points). Do you expect Ole Miss's spread attack to be successful?

To be fair to the defense, they only gave up 28 to A&M in regulation. At the time that was viewed as outstanding because of what A&M had done to that point. The game shouldn't have even gone into overtime, but I digress. I don't expect Ole Miss to have the success that Auburn and A&M had, because the defense has developed so much since then. They have a confidence now that they didn't have against those two teams early in the season.

6. Y'all really don't need two running backs as good as Alex Collins and Jonathan Williams. Can we borrow one? We promise to give him back after the season.

I don't think Coach Bielema would go for it, but I would gladly trade Collins for a healthy Laquon Treadwell. Arkansas is hurting so much at the receiver position a general manager would have to make a move to fix that. Plus, we would then get to know how good Allen would be if he actually had a weapon on the outside. I'm so ready for that argument to die that I would trade just about anyone at this point to make it happen.