The Growler of Oxford, an Ole Miss craft beer haven

smeargle visits The Growler (for like the 10th time since it opened a month ago) and finds out more about why you should grab a beer there this weekend....or any other weekend....or any day at any hour for that matter.

Share All sharing options for: The Growler of Oxford, an Ole Miss craft beer haven

Are you coming into Oxford for the first time this season to experience what will surely be the most chaotic and sardine-like experience in the Grove? Are you a national follower of ESPN's College Game Day or with a group of people making a pilgrimage to one of the biggest football events ever to hit the tailgating mecca of the country? Are you looking for places to drink that might be different than your run of the mill stint at a typical bar? Regardless of what category you fall under, Oxford has a lot of new places that have popped up since last football season that deserve your attention. One of those places is The Growler, a recently opened craft-beer bar located right off the Square. You may remember me tweeting about their beautiful pint glasses the day after they opened.

And the pint glasses at @OxfordGrowler are down right gorgeous. pic.twitter.com/KZWlFKdeE4

The Growler is different from a lot of Oxford's bars in that it offers craft beers and a limited food menu (snack plates and sandwiches). But what it may lack in food, it makes up with a compilation of some of the best craft beers available from around the country, with special emphasis on local and Southern breweries. And of course, not only does The Growler offer a great place to sit and sip, but you can purchase and refill half-gallon growlers in order to take some of the brewskies home or to the Grove.

And, as it turns out the head bartender of The Growler is a FotC (Hi, The Wolfman's Brother) so we were lucky to get the inside track into what makes the place tick. 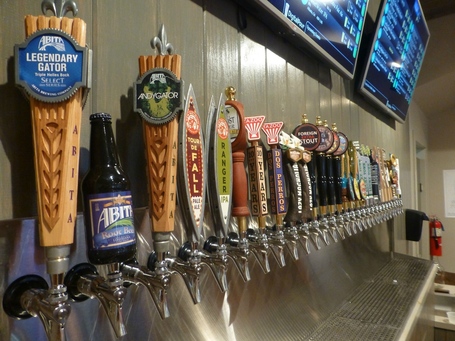 Can you start by telling us about yourself and the reason The Growler is the place to come and grab a beer?

My name is Chris Kauerz, the head bartender here, and I'm from Meridian, MS. The Growler is a craft beer bar on the square on N. Lamar. We have 30 craft beers on tap that we rotate about every other day, we get at least one or two new beers. We've probably rotated about 30-40 beers in the less than a month time frame that we've been open. We barely have a keg on for more than one or two days so you are guaranteed to get a fresh beer.

Could you talk about the craft beer scene in MS and how it's busted wide open overnight? At first we only had Lazy Magnolia, and now there's Yalobusha, Lucky Town, Southern Prohibition, etc. Talk about how it's developing even more with new breweries popping up left and right.

We are just riding the wave of the craft beer scene here in Oxford. I told my boss that he was opening this place at the right time because no one else has the selection that we offer all in one place. Once Mississippi finally got rid of its archaic beer laws and allowed for higher gravity brews, there was just an explosion of craft breweries pumping out some great beer. Now, you can even get some beers in Mississippi that you couldn't get in Tennessee. [I remember having to drive to Memphis to get certain beers. Kids these days have got it good. -Ed]

What are some of your keys and goals for long term success for a bar in Oxford? What made you think The Growler would be special enough to stand out?

I hope that this place has staying power. As long as our product stays fresh, I think it should be fine. I can also see us expanding our beer line up from 30 to 50. Also, if you look at the sophistication, the culture and the educated people in this town, craft beer kind of goes hand in hand with that. We are also educating people every day about what makes a good beer. We are also really affordable. We've got flights of beer that are four 4-5 ounce glasses for $8 and pints which are $5-$6. 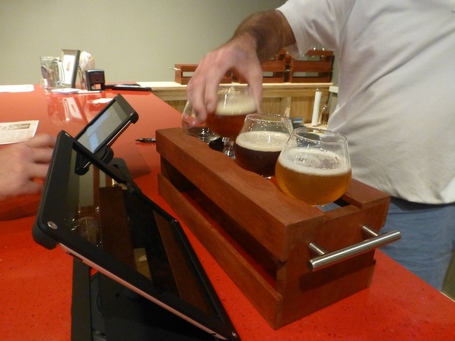 We also sell glass growlers for $6 and the "gameday" growlers for $40 (keeps beer cold for 3 hours). The growler fills range from $11-$17. I think we would have to do something really wrong for this place to not be successful. 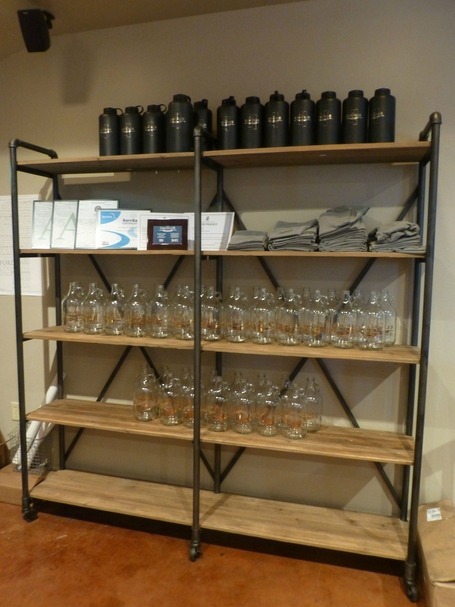 What about your rotation of taps and what dictates what's flowing?

Well the beers are governed by the distributors. However, they are all new to this beer scene too so we are in the same boat together. If you consider that in the past year, we've gotten cold beer, beer on Sundays and now high gravity beer, that's a lot for a big distributor to adapt to in a small amount of time. While we are new to the bar scene in Oxford, a lot of distributors are already realizing that with our tap turnaround, we are the perfect place where they can give some of the one-offs.

A one-off is like a seasonal or one time beer rotation when a brewery might have some extra hops laying around and just decide, "Hey, let's throw all this together and see what happens." Well, it turns out it's awesome so they name it "Red Cup beer" or whatever. Then they can distribute that one-off to a place like us and put it out in the public to see how it goes. If the feedback is positive, then they can make another batch and distribute it further, if it's terrible, just throw it out and forget about it. Other bars usually can't take one-offs because they might not have room or their clientele usually isn't comfortable buying a $6 pint of something they've never heard of. In here, if you don't like your beer, I can work with you. We've also got little taster cups which is a bit like a grown up yogurt store so you can try before you buy.

Those TV boards with the beer selection are awesome. I love the utilization of social media apps as well, more specifically Twitter, Instagram and Untappd [If you love beer and like the idea of tracking all of the beers you've had, you should definitely check out this app. Imagine FourSquare but with beer -Ed]. Could you tell me more about them? 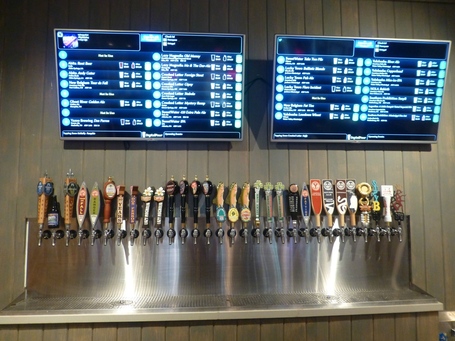 Well it starts with our walk in cooler. We use a company called A Head for Profits which allows us to use a nitrogen-carbon dioxide blend so that our beer is always at 37-38 degrees. Our cooler right now is at 35.4 degrees and our taps are six inches from the cooler. We have the freshest, cleanest and coldest beer in Oxford. 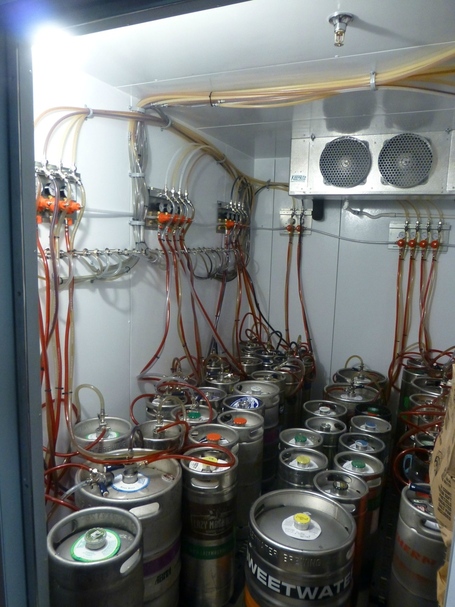 We have unique media boards that utilize Digital Pour, you can see it right there on that laptop. The two TV monitors above the taps give the basic information about the beer such as the name, where it's from, the brewery, the ABV, and the IBU (International Bitterness Unit). 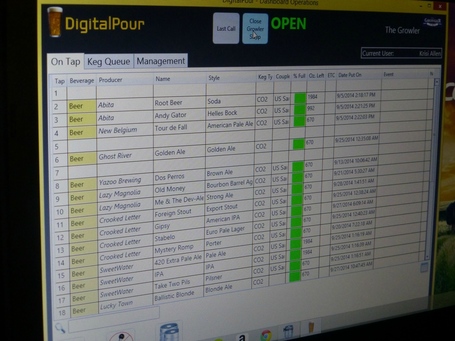 The other thing is our social media. The screens are also interactive with Twitter, Instagram and Facebook so if you are sitting and having a beer and you check/tag/tweet that you are at The Growler, within minutes your name and account pop up on the screen for everyone else to see.

What's next for The Growler? Any plans to expand the menu/taps? Any promotions you'd like our readers to know about?

We plan to get more beer with different tastes for different seasons so keep coming back to see us. We've been asked if we would consider a membership/frequent sipper program of sorts and that is something we are trying to figure out. We also plan to get some live acoustic music outside in the breezeway on gameday weekends. As for Brewing 101, we want to do some brew classes coming up soon as well as hosting professional events for private parties. Check out our website at www.thegrowleroxford.com for more details. 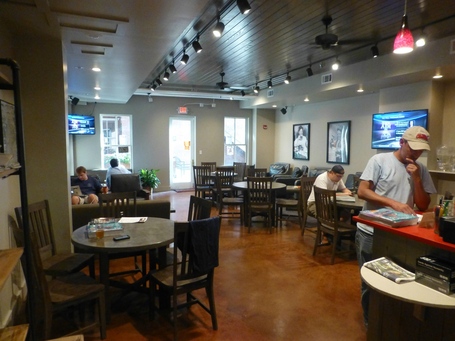 Thanks again to Chris and everyone at The Growler for your time and efforts in bringing a craft beer bar to Oxford. Check them out this weekend or any other that you come in town. Cheers y'all.