We look at how Hugh Freeze has used his defensive tackle-turned quarterback to create mismatches, and how it could play a key role on Saturday.

There's a near-300 pound former defensive tackle lined up at quarterback in the Ole Miss backfield, and you may as well get the hell out of his way.

Jeremy Liggins, a reserve tight end and former high school quarterback whose 6'3, 296-pound frame has reduced defensive fronts to bowling pins and made Joe Tessitore as giddy as a sorority girl on bid day, has carved out a niche running the ball as a wildcat quarterback in short-yardage situations this season. Come Saturday and the Rebels' monster showdown with Alabama, Liggins may be the key in providing bite to an otherwise toothless rushing attack.

On a team whose top two running backs each weigh in under 200 pounds and whose offensive line has consistently failed to provide much push in the ground game, Big Lig has become the Rebels' most reliable option when it comes to pounding out tough yards. In eight short-yardage snaps as a quarterback this season, Liggins has converted seven of them, including a two-yard touchdown against Louisiana-Lafayette. Playing against a Bama three-man front that can average 311 pounds apiece and anchors the third-best run defense in the country (62 yards allowed per game), Liggins could be critical in extending drives.

It's unlikely the Rebel offensive line can do it on their own. According to Bill Connelly of Football Study Hall, the Ole Miss front has allowed the ball carrier to be tackled at or behind the line of scrimmage on 24.7 percent of run plays -- a rate worse than all but 12 of the 128 FBS teams. And yet, Ole Miss is 19th best in the nation in converting short-yardage situations (83.3 percent). That's directly attributable to Liggins, who simply doesn't need his O-line to clear lanes for him -- he clears his own.

As successful -- and entertaining -- as Liggins has been running behind center, he's been able to make an impact without even touching the ball.

Let's take a look at an example from the Vanderbilt game. Liggins lines up at fullback offset in front of backup quarterback DeVante Kincade, a known running threat. Two receivers are split out to either side, one stacked on top of the other.

A defense typically responds to a spread formation like this by inserting additional defensive backs and moving them outside. But the Commodores are so concerned with the running threat posed by Kincade and Liggins that they stay in their base 3-4 and keep one of their safeties on the inner-third of the field. This leaves the cornerback on the strong side on the perimeter by himself against a pair of receivers.

Seeing this, Kincade takes a step back and flings the ball out to Quincy Adeboyejo, who gets a good block from Vince Sanders and is nine yards upfield before the safety can get over to help his outnumbered teammate.

(You may have to press play twice.)

Hugh Freeze lines up in the same formation the very next play, and this is when you see the real genius of the set. Realizing they're outmanned on the perimeter, Vandy has traded a defensive lineman for a defensive back and moved he and one of the safeties out to help the cornerbacks. This leaves two linemen, four linebackers and a lone safety in the middle of the field. 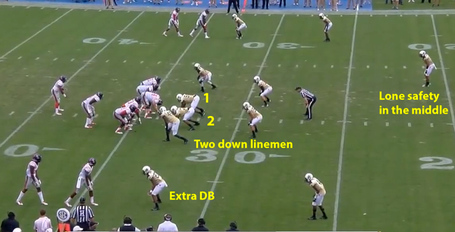 What Freeze has done is engineered a favorable matchup. The defense has only six players in the box, and the offense has six blockers to match them. This time, Kincade fakes the outside pass, then follows Liggins to where the third defensive lineman used to be. Liggins clears the way with a block on the inside linebacker and Ole Miss picks up the first down.

(You may have to press play twice.)

Freeze is just getting started exploring the creative ways to create mismatches with his gargantuan weapon. Just last week against Memphis, we saw Liggins hand the ball off on a jet sweep, yet another way to punish teams for stacking the middle of the field. And you can bet that at some point this season, Liggins, who was recruited to LSU as a quarterback and played the position as recently as last season in the juco ranks, is going to throw the ball -- whether it be a Tim Tebow jump toss or a Malzahn-esque read-option pop pass. I wouldn't be shocked if it came this Saturday in a goal line situation against the Tide.

Somewhere, Joe Tessitore will have an aneurism.