The star junior said he'll make a decision on his future by next week. What are the chances he'll stick around Oxford for another year?

With just over three and a half minutes remaining in the third quarter of the Music City Bowl, Bo Wallace flung a short pass into the right flat to Donte Moncrief, who made a few strides upfield before scampering out of bounds. The five-yard gain was of little significance -- especially on a day the junior receiver piled up 113 yards and a touchdown -- aside from the fact it could have been the last reception of his Ole Miss career.

With the deadline for underclassman to declare for the 2014 NFL Draft less than two weeks away, Moncrief's decision to return to Oxford for his senior year or cash in at the next level is due soon. Following the Rebels' win over Georgia Tech, he told the Ole Miss Spirit he'll be making that decision sometime next week. 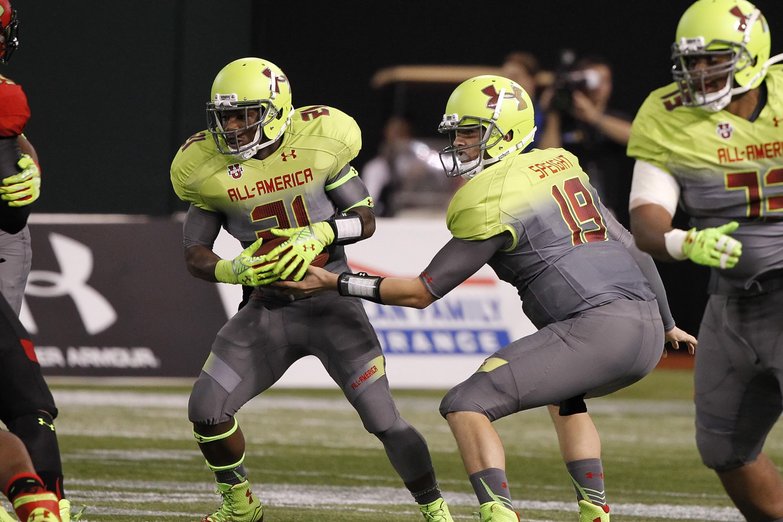 A pair of future Rebels showed off in Under Armour's annual high school all-star game.

Or rather he'll be letting Hugh Freeze make that decision for him.

"Coach Freeze has been in this situation before," Moncrief said. "He knows what's best for me. I'm going to let him make that big decision."

"It's up to my dad and my mom and Coach Freeze to sit down and talk about it. Whatever decision they make, I'm going to go along with it. ... The big thing is for my mom, she always said to get my degree."

It was once a forgone conclusion Moncrief would be NFL-bound after his third year. After emerging as a freshman to lead the team in receptions, receiving yards and receiving touchdowns in 2011, he tied a school record with 10 touchdowns grabs as a sophomore and became one of the top pass catchers in the SEC, if not the country.

But his appetite hasn't been quite what we expected in 2013. He had far from a bad season -- 59 catches for a team-high 938 yards and six scores -- but it has caused some to sepeculate that he'll come back for his senior year to bolster his draft stock.

While Moncrief's quotes about letting Freeze make his decision are promising for Rebel fans, what are the chances that he actually returns?

An improved offensive line and a healthier, more experienced Dr. Bo could lead to a monster 2014 season.

Still not that great, probably. For starters, his statistical drop isn't as detrimental as would be believed. NFL scouting is and always has been about projection over performance -- teams aren't looking for gaudy stats as much as they are guys that fit the physical description of what an NFL player should be. As a six-foot-three, 226-pounder with great body control, breakaway speed and soft hands (though he was uncharacteristically drop-happy at times this season) Moncrief certainly has the tools for the league. SB Nation's draft experts rank him the No. 7 receiver prospect in this class and he's projected as a third-round pick by CBS Sports.

He's sent in for a professional evaluation to get feedback on where his draft status stands and what round he could expect to go in. As of last Friday he told Parish Alford he hadn't received that info yet, and he likely won't make any decision until that comes through.

Still, there's certainly validity to the argument he can raise his stock by coming back to Oxford for another year. An improved offensive line and a healthier, more experienced Dr. Bo could lead to a monster 2014 season. Moncrief could also have a bit less competition among his draft-bound peers -- while CBS Sports rates him the No. 16 wideout in this year's class, they have him No. 4 for 2015.

Whatever judgement Moncrief, his family and Freeze arrive at, it won't be an easy one, but it will be in his best interest. If he does move on, we at the Cup wish him well and hope he makes piles of money.

The man's gotta eat, after all.