It got weird in the Tad Pad Wednesday night, but in the end, Marshall Henderson's 25 points gave the Rebs an 88-74 overtime win against LSU.

With just under three minutes remaining in overtime, a missed free throw was tipped back to Marshall Henderson, fresh off his three-game suspension. Logic would suggest you form up the offense for another attack. Marshall, of course, said "fuck that," took a quick hop back and drained a 3 to give Ole Miss a seven-point lead over LSU.

The Tigers would never recover and the Rebs went on to win, 88-74. 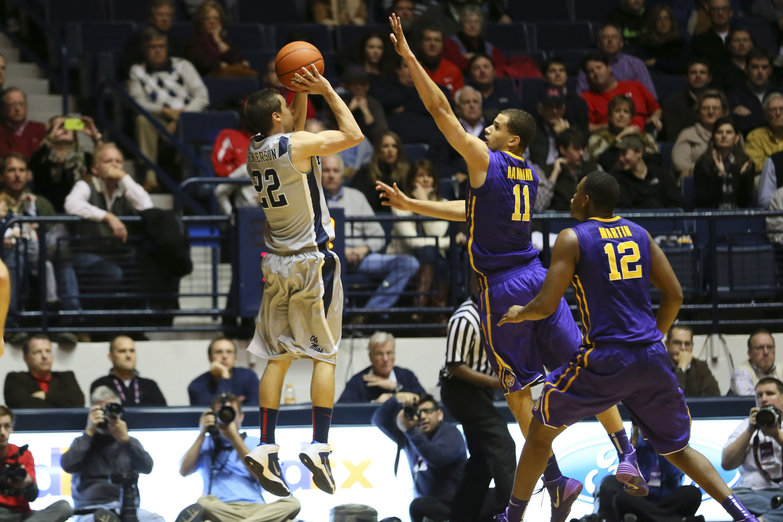 Really, though, it was CSS color commentator Kyle Macy that stole the show.

Shortly after a 10-0 Tiger run early in the first half, Andy Kennedy was T'd up for bitching at the refs. The Rebs responded with an 8-2 run of their own, and Sebastian Saiz had a particularly nasty dunk to cap it and regain the lead. It was at this point that Macy made the decision to verbally hashtag "Tad Pad Throwdown."

I'd like to use this time to address the social phenomenon of verbal hashtagging. Below is a list of situations in which it is acceptable to use hashtags in actual life:

At another point in the first half, Macy came out of a commercial break inexplicably discussing Justin Timberlake and how he was going to bring sexy back. At some point he attempted to tie that in with bringing Marshall back. That's about as logical as it got.

Macy's hashtagging makes a bit more sense in light of his fanhood of JT, the latter of which is a noted verbal hashtagger.

Oh yea, the game. Anthony Perez started in place of a struggling Demarco Cox (#ErectileDysfunction #PenisJokes), but it was Saiz -- who remembered his jersey this time -- that provided the surge inside (#MorePenisJokes). He scored a career-high 20 points and was unstoppable at times (#SimonSaiz). It will be interesting to see if he earns a starting nod over Cox and Perez against South Carolina on Saturday.

Marshall balled out in his first SEC game of the season, posting a game-high 25 points and hitting six 3s (#GuessWho'sBack #WhiteGirlWednesday #BlowinLines&DraininTreys). He also dished seven assistants, repeatedly finding teammates with dimes while driving to the hoop. He drained a ridiculous rainbow while getting fouled with just under five minutes remaining in regulation, and the the four-point play gave the Rebs a brief lead (#And1 #RoosterShark).

The game went back and forth from there, with Summers (20 points, eight assists) hitting his late jumper to tie the game at 69 (#MoreSexJokes).