Throughout high school and college I didn't know two split chicken breast's worth around the kitchen, and neither did you.

Let's be honest, no one is lighting up that oven or stove top in the 100 square foot kitchen provided in Kincannon, and no one keeps measuring cups, cast-iron skillets, Wüsthof knives, silicon-coated whisks, and jars of home-dried thyme within hands reach in their dorm room or off-campus condo. (One acquires all of these things upon registering for a wedding, of course.)

The limits of cooking for most Ole Miss students consists of ramen, frozen pizza, grilled cheese sandwiches, or anything that will fit into a microwave. Then, if you participated in Greek life, you never had to worry about cooking anything ever anyway, only delaying the inevitable. (Shout out to the house mommas!)

On the other hand, even if Ole Miss students and young Oxonians don't know how to cook, they sure do know how to eat. Oxford has a great variety of restaurants that can whet any appetite and then some. Easily the most well known chef in Oxford is John Currence. His four restaurants - City Grocery, Bouré, Snackbar, and Big Bad Breakfast - all provide different strokes for different folks. Whether you are one to eat at City Grocery on football weekends (the waiting list opens in JUNE prior to football season....JUNE), grab a Bouré burger for lunch, get your morning bacon fix at BBB, or down some bourbon drinks from Snackbar, you've probably already found something of his that you enjoy in Oxford.

So, if you've already made a point to eat like him, why not learn how to cook like him?

My exploration into recreating Oxford's best cuisine in my kitchen started with a Thursday night at Thacker Mountain Radio. The feature of the night was the Southern Foodways Alliance, of which John Currence is a member. He was a guest author for that week's episode of the radio program, and read to us an excerpt of his recently released cookbook, Pickles, Pigs & Whiskey: Recipes from my Three Favorite Food Groups (and then some).

(And I completely agree with him, whiskey is TOTALLY a food group. It's the rock solid foundation of my food pyramid.)

He read the prelude to his soup chapter, a hilarious anecdote about "punish stew," a soup his mother made him eat before he could go out to a Mardi Gras parade. He refused, he stayed home, and she won; a story we are all too familiar with as children. While I own several cookbooks, I've never actually read through an entire thing, much less tried more than a handful of their recipes. That changed when I got Currence's book for Christmas. What followed this gift was a holiday obsession. I have read through the recipes and corresponding anecdotes twice already, and tried recreating seven recipes in three days.

(Disclaimer: I've kept the details of the recipes to a bare minimum in order to pay Currence his due. Go out and support your local Oxonion big bad chef and buy the book, it's great.)

The book has 10 chapters:

My first experiment was with BBB's famous Coca-Cola Brined Fried Chicken Thighs (I think BBB actually serves a whole hind quarter with their meal). This was probably a very risky decision considering I've never actually attempted to deep fry chicken. My only experience with deep frying anything is with sweet potato fritters (a horrible catastrophe) and catfish fillets (not horrible). It started with an overnight brine of Coke, salt, thyme, garlic and hot sauce. 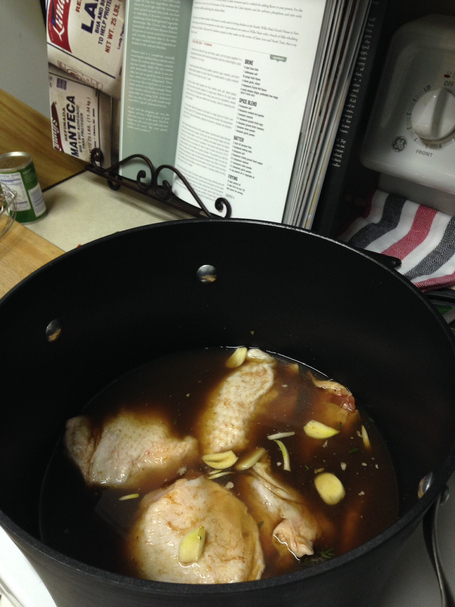 While it brined throughout the night and the next day, I tried my first stab at pickling. It's a bit perfect that I would find a cookbook that piques my interest in pickling right when I've come into enjoying pickled items in the last year. While I don't think I'll ever try to cook nor eat his recipe for pickled pig's ears and lamb hearts (where do you even buy those?), the fruit and veggies sounded easy and yummy enough. First up, Pickled Grapes. The grapes are pickled along with jalapeños and ginger which yield a nice spicy and sweet contrast. As I finished up jarring up the last of the grapes, it was time to fry some chicken! 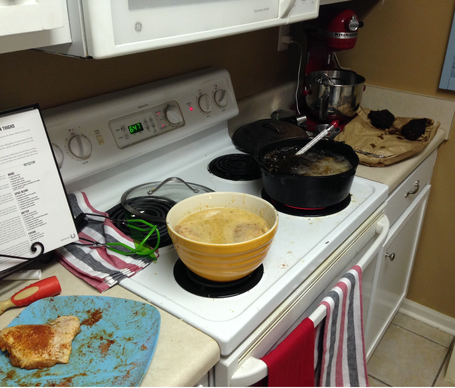 Currence is a staunch proponent of frying with lard. While my wife was primarily opposed to the use of lard in anything, it sure does add a flavor to frying. Currence went as a far as to have a whole page dedicated to the use of lard in cooking. According to one of the chefs he worked under, Bill Neal, "I am not saying you shouldn't--I'm saying ‘don't ever' make biscuits or piecrust without lard. It's just a waste of time." Made with a wet batter, the chicken turned out extremely juicy with a great tasting skin. While the skin looks black, there was no burnt taste whatsoever.

Then it was time for some more pickling: Lemon-pickled Honeycrisp Apples. Apples, yellow, onion, lemon zest and lemon juice make up the contents of a snack that is pickled under apple cider vinegar, honey, bay leaves, and spices. These apple wedges pack quite the kick! They lose a lot of their sweetness to the punch of the onion and lemon, which adds a bit of confusion to the taste buds.

"I'm eating an apple so I know this should be sweet. But wait, there's a strong bite coming out of no where! Almost like the turf coming up to trip the Georgia Tech punter trying to sneak a 4th down conversion on the Ole Miss Rebels!" -My taste buds 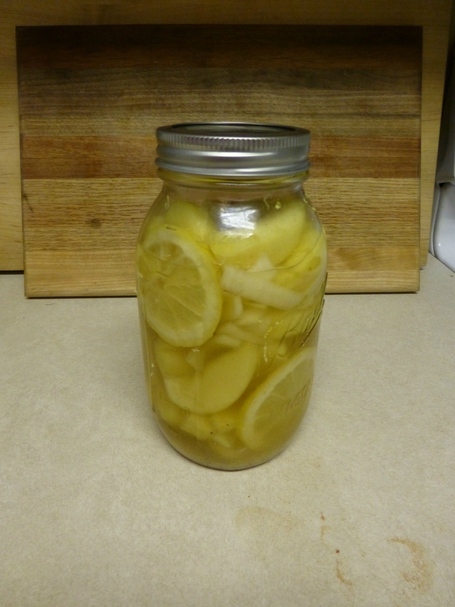 With a chapter called Slathering, Squirting & Smearing, Currence tactfully includes (on purpose or not, who's to say) homemade mayonnaise as the first recipe. I made Homemade "Duke's" Mayonnaise. My first batch was a complete disaster. I didn't whisk the egg yolks fast nor long enough so when I added the oil, it turned into a soupy oily egg wash. The next batch was more spot on but, even after jarring, I still had to return the mayo to my mixer for further whisking in order to fully incorporate the oil. What resulted was a creamy mayo with a very smooth and subtle taste that I instantly used in Smoked Chicken Salad. 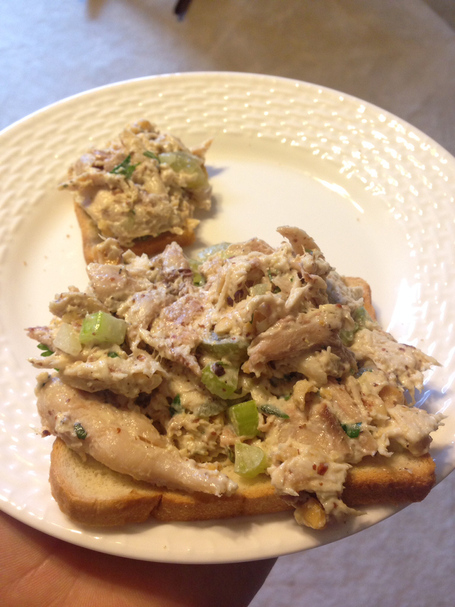 While I used some leftover rotisserie chicken instead of actually smoking one, the recipe itself was one of the best for chicken salad I've ever had. I've never had peanuts in the place of pecans in chicken salad but they turned out nicely. I also threw in some of the previously mentioned pickled grapes to add some sweetness. The spice came along for the ride and what followed was a chicken salad of the likes I've never tasted. Definitely doing this with smoked chicken when it gets warm enough to heat my smoker back up.

My last experiment was with the Bread-and-Butter Pickles. 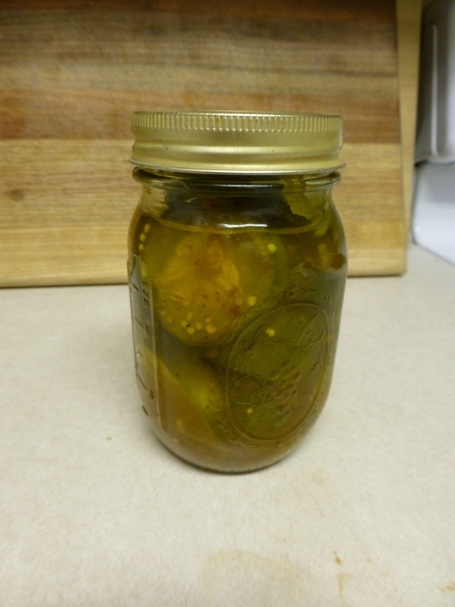 This recipe had a lot to live up to considering my grandmother-in-law (R.I.P. Mamaw) made a mean sweet pickle relish that is on point with so many things: tuna salad, burgers, ice cream, etc. While the process of making the pickles was a blast, I can't say too much for the pickles themselves considering I haven't actually tried them yet. I could just be ignant, but Currence never mentioned how long his recipes should stay pickling in their juices before they are at their opportune time to snack, just how long they would keep in the fridge. Also pictured are some roasted shiitake mushrooms for his Soy-Pickled Shiitakes. Poor planning on my part and not enough soy sauce caused these fun guys (lulz) to go into a pasta sauce I made that night. 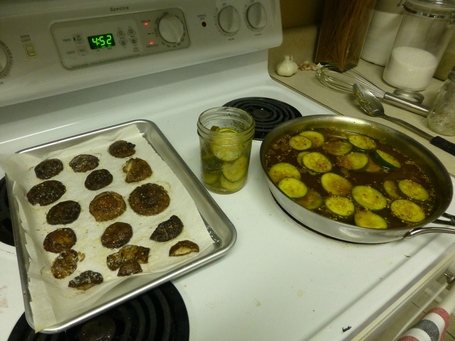 Thanks to this book I've had a lot of fun in the kitchen, made some messes and created a lack of space in our fridge that my wife's not too excited about. My next challenges include the stocks and duck prosciutto (because the already crowded fridge needs duck breasts hanging from the racks for three weeks). Overall, this cookbook is less a compilation of recipes and tips and more like an experience. Most of the recipes are not for the faint of heart so you'll need strap on your big boy/girl britches and commit to cooking some great food. Every recipe has a corresponding song which you can find on Currence's Spotify, as well as stories about Oxford, New Orleans and Currence's history that are phenomenally well told by someone with whom I'd love to share a glass of bourbon. If you're out there reading this Johnny boy, let's meet up and become drinkin' buddies. Running four restaurants isn't that time consuming right? 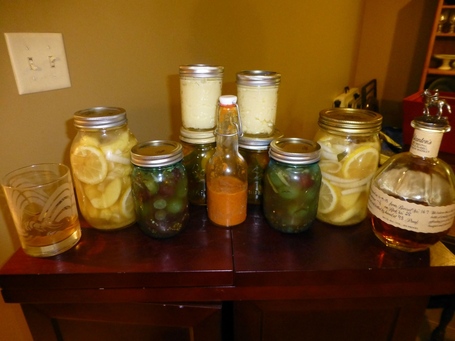