How does the 3-4 defense work?

With Alabama's base defense featuring three linemen and four linebackers, we wanted to revisit what exactly the 3-4 is and what the primary responsibilities are among the front seven.

Share All sharing options for: How does the 3-4 defense work?

Nick Saban has long been recognized as one of the premier defensive minds in college football. Seemingly every season, he has had a defense that features mauling nose tackles, dominant outside linebackers, and elite defensive backs in coverage. His base defense is what is known as the 3-4, with three down linemen and four linebackers. Traditionally, teams run a 4-3 scheme (run through the logic here - that means four linemen and three 'backers). Ole Miss under Dave Wommack runs a 4-2-5.

So what does that mean? What should Ole Miss fans look for this weekend as their offense, which is currently second in the SEC West with 490 yards per game, takes on the Alabama Crimson Tide in Tuscaloosa?

To restate the obvious, the 3-4 defense puts one fewer defensive lineman on the field and one more linebacker compared to more traditional looks. Since the lineman removed from the equation is theoretically a defensive tackle, there could be a significant decrease in the size of the front seven. To combat this, and for other reasons which will be explained, the 3-4 defensive ends are very different than 4-3 ends. In the 3-4, defensive ends are big, typically in the 280-300 range, or roughly the size of most 4-3 defensive tackles. They flank what is typically a gargantuan, space-eating nose tackle. The defensive ends aren't asked to pile up sacks and generally won't generate big stats. They eat up linemen to help the other players in the box make plays. The linebackers are also generally bigger with two being traditional middle (or "mike") linebackers and the outside linebackers being rush linebackers. What you get is a system that can, ideally, move around a lot. As we'll see from Saban's defense, it isn't uncommon for a linebacker to move down to the line occasionally and give a 4-3 look.

The 3-4 can be helpful in many ways. Because of the positioning of linebackers, it makes outside runs more difficult. With two linebackers on each side of the field in the base, there are more defensive players in position to pursue and tackle when the ball carrier tries to bounce outside. Also, the lack of an extra defensive lineman doesn't really hurt in that situation since the runner is only affected by the defensive end having gotten too far away from where the extra 4-3 DT would be located anyway.

The defense can, however, be very susceptible to inside runs. With only three linemen to block, it's theoretically possible for two linemen to get to the second level an help spring large gains up the middle. This is where the personnel become pivotal. The defense pretty much revolves around the nose tackle (NT). He's the biggest player on the field and lines up directly over the center. Assuming he isn't terrible, he will always be double-teamed. If he can manage to not get blown off the ball, he's in the way and eats up at least two blockers. This allows for the two linebackers behind him to have only one blocker to deal with. Among the two of them, one generally takes the offensive lineman (usually a guard) while the other has a chance to make a play on the ball. Each linebacker has gap responsibility and must be disciplined enough to stop plays coming through their assigned gap.

Nick Saban has consistently recruited perfectly for this system. It all starts up front with NT Brandon Ivory, who is 6'4" 320 and able to eat up blockers without getting pushed back too much. Alabama's defensive end play is strong as well, but the real strenght among the frong seven is the linebacking corps which features consensus All-American "will" CJ Mosley and "sam" Adroam Hubbard. The linebackers can move all over the place and blitz from anywhere. You'll see plenty of 4-3, traditional nickel, and traditional dime looks, but many of them all stem from the basic 3-4 with linebackers who are big enough to play up on the line some.

They don't do anything too drastically unique, but that's because many 3-4 teams have begun doing things Nick Saban threw at the league when he entered. He's a 3-4 technician and is known for devising incredible third down strategy to really throw off opposing offenses. The solution to combat this has been to play up-tempo, particularly between second and third down, making it difficult for Saban to get any new playcalls in. It works, but what happens when you face third and 15 and try to get the ball away quickly just to eliminate the edge Saban has on third downs? Turnovers or just incompletions. Getting positive yardage on first and second downs is absolutely critical.

The 3-4 Versus the Read-Option 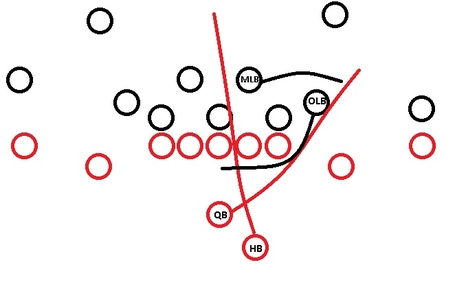 Against a 4-3 defense, the read-option is pretty basic. Read the unblocked play-side end or outside linebacker. If he commits to the back, have the quarterback keep the ball and run directly to the space from which that player came. If the end or 'backer commits to the quarterback, have the running back take the ball away from him and run with an additional blocker (since you didn't block the play-side end). There are certainly ways to stop it, but it's a simple read-and-react.

Running the read-option against the 3-4 is also simple in many ways. There are still reads that cause the offense to choose between two runs. The difference is in which player to read. You're almost certainly not going to have your primary read be of the defensive end (since you have fewer linemen to block anyway and there are two other players on that side to worry about). Instead, many offenses read one of the linebackers. Certainly, you wouldn't want to run straight at an outside linebacker who is positioned perfectly to stop outside runs. It's common to read that linebacker and make your decision based on his read.

The problem with this is that the other linebacker has a chance to really wreck your world. You're not reading him and don't really know if he will "scrape," a term used for when a player moves into the same space that had been occupied by the player making a read - shown above with a MLB "scraping" over to fill the gap left by the OLB who has committed to stopping the run. If he does, and if he recognizes the read-option he will, then you're running directly where he's moving. 4-3 defenses can do this as well, but it's not quite as easy due to positioning and the opportunity the tackle (who doesn't block the end) has to get to the second level and block the linebacker who would be capable of scraping.

The Rebels sometimes give 3-4 looks, but they could have made it their base defense had recruiting gone differently. Chris Jones and Robert Nkemdiche could both be exceptional 3-4 ends (as would Isaac Gross actually). They're big, strong, and quick. With those three, the Ole Miss defense could have tremendous size outside along with the ability to rotate in a third player. Actually, Ole Miss has the ends to do that now. The problem is that they don't really have a nose tackle who fits the 3-4 mold. All the Rebels defensive tackles are smaller and not as capable of being double-teamed and still giving up no ground.

CJ Johnson could move back to OLB in the 3-4, something he occasionally kind of does right now. As a 3-4 linebacker, it wouldn't be as big a certainty that he was rushing the passer, resulting in him going unblocked, or poorly blocked, more often. In fact, if Johnson makes it to the NFL, a rush backer in the 3-4 may be a better fit for him.

Ole Miss could struggle to find rushing yards against Alabama because of their size and system. Ole Miss relies heavily on outside runs, but those won't really be there against the 3-4. Some people have suggested that Alabama will run a more traditional dime package (3 linemen, 2 backers, 4 corners, 2 safeties) to combat the four-wide looks the Rebels regularly show. If they do that, it's a good thing. I'd much rather be put in a situation where the success of runs relies on our receivers blocking their corners instead of having to make good blocking reads along their front seven.