Recently, one of the preseason magazines (I honestly don't know which one because I live in ACC country now) did a piece in which an anonymous SEC coach called Bo Wallace a "below-average quarterback." This angered Wallace, who tweeted in response:

Whatever SEC coach ANONYMOUSLY said I was a below average SEC qb I hope you're on our schedule Cause were going to put 30 up on you!!! 😠

To the Statistics Cave!

Even before this anonymous comment, I was planning to do some research on Bo Wallace's ability (at least statistically) within the SEC. I made a lot of charts about how Wallace had done in several situations. Does he play better at home? Did he improve as the year went on? Did he regress? How did playing through injury affect his arm? Unfortunately, the data suggests something kind of boring. It turns out that for most of the year, in terms of passing statistics, Bo Wallace was simply an above average SEC quarterback, though not by much (other than when he and the team curb-stomped Mississippi State to the tune of five touchdown passes). [Edited to add: Bo Wallace never played an SEC game with a healthy throwing shoulder. That should be taken into account to at least some degree.] 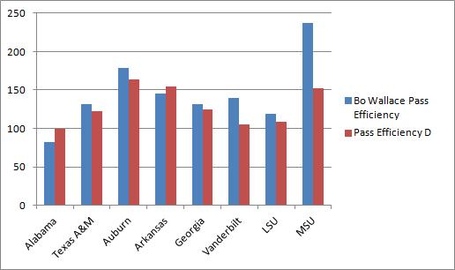 Here's Bo's pass efficiency compared to the average SEC-only pass efficiency defense of the SEC teams he faced this past season. Why look at pass efficiency instead of another offensive statistic like passing yards? Because pass efficiency is the least system-based stat for quarterbacks among common stats. Passing yards, touchdowns, etc., can all be based on the system the coach runs or the number of plays run overall. The efficiency is affected by that system as well, but it shows more about actual quarterback ability than most other offensive stats. It factors in yards per attempt, percentage of passes resulting in a touchdown, percentage of passes resulting in an interception, sacks, and several other more system-neutral statistics. Ranking any aspect of a football team solely on the number of yards they produce or yards they give up is, in a word, stupid.

As you can see, there were two SEC games in which Wallace did not exceed the opponent's average SEC-only pass efficiency defense: Alabama and Arkansas. In the Alabama game, Wallace was 15/26 for 123 yards with no touchdowns and two interceptions. It was his first SEC game, it was on the road, and Alabama is excellent. It didn't go well. Against Arkansas, Wallace actually played quite well. He was 29/37 for 278 yards with one touchdown and one interception. Those numbers certainly aren't bad, nor are they eye-popping either. The reason he didn't beat the Razorback's average though is because Arkansas' pass defense was so horrendous last season that even a 145 rating wasn't good enough to place him in the top half (sorta) of the SEC quarterbacks the Razorbacks faced (AJ McCarron, Connor Shaw, Johnny Manziel, Zach Mettenberger, Clint Moseley, Jalen Whitlow, and Tyler Russell).

He exceeded the SEC's average quarterback rating against Texas A&M, Auburn, Georgia, Vanderbilt, LSU, and Mississippi State. Wallace only really greatly exceeded the average against Mississippi State. Overall, it's pretty clear that he's not a below average SEC quarterback, despite what any anonymous SEC coach (who may or may not have been was totally Dan Mullen) says. As a sophomore he was simply a consistently above-average SEC quarterback.

This gets even clearer though when you look at what Wallace contributed on the ground in his first year as a starter. When sacks are removed from Wallace's rushing statistics, he ran 109 times for 603 yards, good for 5.53 yards per carry. On top of that, Wallace accounted for eight rushing touchdowns. Because of statistics that aren't quite as in-depth as many fans wish they were, there is no ranking for average rushing totals surrendered by SEC teams. 603 yards is a lot though. That's not common for most teams (though many don't run a system which asks the quarterback to run often). Wallace's ability in the zone-read adds significant value to a team running Hugh Freeze's spread offense. He shouldn't have been able to score a 50+ yard rushing touchdown against LSU, but because of his ability to sell the handoff, he did. Things like that help to strengthen Wallace's already strong case.

Overall, it's a little silly to suggest that Bo Wallace is below average. When trying to name seven starting SEC quarterbacks from last year who appear to be "better," I could only get Johnny Manziel, AJ McCarron, Aaron Murray, and Connor Shaw. A case could be made for Tyler Wilson and Tyler Russell, but neither would be all that compelling. With all the quarterbacks on that list other than Tyler Wilson returning, the SEC could have a phenomenal year in terms of passing skill. Wallace is likely to be right in the middle of it.