Freshmen Report to Campus, Already Get the Party Started

Robert Nkemdiche, Leremy Tunsil, Laquon Treadwell, and the makings of one of Ole Miss' best recruiting classes ever reported to campus yesterday.

Share All sharing options for: Freshmen Report to Campus, Already Get the Party Started

The first session of summer school begins today, and with that means the arrival of most members of the headline-grabbing Ole Miss Rebel signing class of 2013. Many of the bigger names are in town - a very notable exception being South Panola's Tony Connor who is, well, pulling a South Panola and taking some time to get fully qualified - as well as much of their incoming freshman teammates. They will join running back Mark Dodson, tight end Christian Morgan, defensive tackle Lavon Hooks, and defensive backs Nick Brassell and Quadarias Mireles who enrolled in school for this spring semester as a part of the incoming class.

Naturally, this is exciting for players, coaches, and fans alike, as the banner recruiting class is slowly beginning to materialize into a collection actual members of an actual SEC football team. Ole Miss Recruiting Coordinator Chris Kiffin shared his excitement with the world via Twitter:

That's Leremy Tunsil and Robert Nkemdiche reporting to the IPF yesterday. Shortly after that picture was taken, Robert took to the Square. 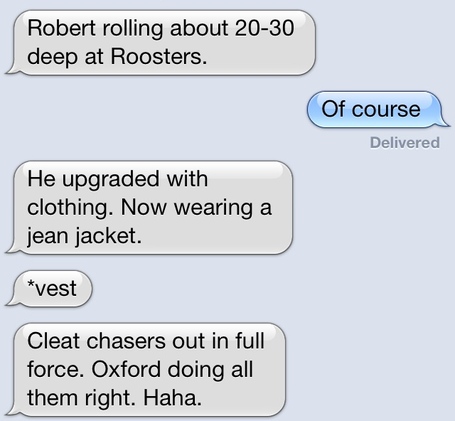