The Image Hugh Freeze Should Have Tweeted

He needs to run these things by me next time.

Share All sharing options for: The Image Hugh Freeze Should Have Tweeted

Regardless, that doesn't mean that such shouldn't be used as a selling point, especially when it comes to recruits who, themselves, are looking to win some sort of championship during their time in college. To reach this end, Hugh Freeze tweeted the above photo earlier this week, which he or some intern presumably made after a few hours spent in a remedial photoshop course (money well spent!). But this picture... it has problems, as was pointed out astutely by SBN's own Jason Kirk, and rather excoriatingly by the likes of CBS and those smug dickheads over at Deadspin.

First, those aren't our trophies. We don't have them. They're not in any sort of Ole Miss trophy case. Granted, one could argue that they're simply being used for symbolic purposes, but it's still needlessly misleading at its most innocuous. Then there's a quote from Calvin Coolidge, which is an interesting choice considering there are probably 20 more interesting and quotable American presidents to have chosen from. And then there's the fact that, outside of the somewhat iffy national championships claim, there is no mention of any of Oxford's nor Ole Miss' other very redeeming qualities.

Considering that, allow me to submit my revisions to this recruiting tool. Once you see those four- and five-star guys rolling in, you'll thank me. 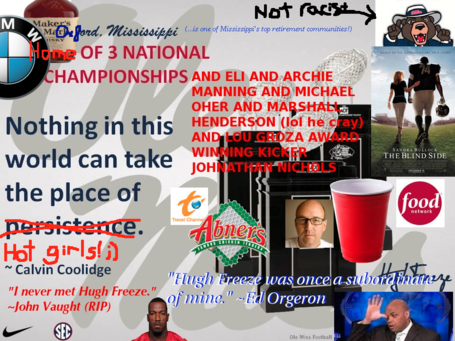 Click to biggify, then spread this to all the 'croots, y'all.