Sorry I haven't updated this in quite some time. Not really. I enjoyed my week off of school, whatever. I don't owe you guys anything! This is going to be short and sweet since things are changing every hour.

Important Notes: Tennessee's season is over. They lost their last game to Alabama and lost to Ole Miss twice. I'm going to assume that they are out of the tournament.

Virginia lost to NC State in the ACC tournament, so they're also out and cannot improve their resume. Verdict? They're out.

Boise State lost to SDSU in the Mountain West tournament. They are very vulnerable on the Bubble.

La Salle lost to Butler in the A-10 tournament. Like BSU, they're very vulnerable.

MTSU lost to FIU in the Sun Belt Semis. They might also be on the way out with an Ole Miss win.

With a Head-to-Head win over Alabama, it'd be hard for Bama to leap Ole Miss unless the Tide can upset Florida tomorrow.

So there's the gist of it. The four teams in front of Ole Miss on the Bubble are all done for the season. A win against Missouri tonight could help the Rebs leapfrog all four of them.

Rundown-Western Kentucky is the only team that has won a conference tournament over a projected at-large bid (MTSU). As covered earlier, MTSU is on the edge of the Bubble. If any of the First Four Out win, MTSU is probably out. So, it might not end up being a Bubble spot lost.

Bucknell, South Dakota State, Belmont, Gonzaga and Creighton were all projected to be at-large bids, and they all took care of business to seal their invite to the Big Dance. Great news for Bubble teams.

Other thin conferences with one at-large bid team left to keep an eye on are Conference USA (Memphis) and MAC (Akron). If these two teams win, there should be no Bubble spots taken by conference tournament upsets. Once again fantastic news for Bubble teams.

So far, there have been no major upsets. Below is the updated SEC bracket. 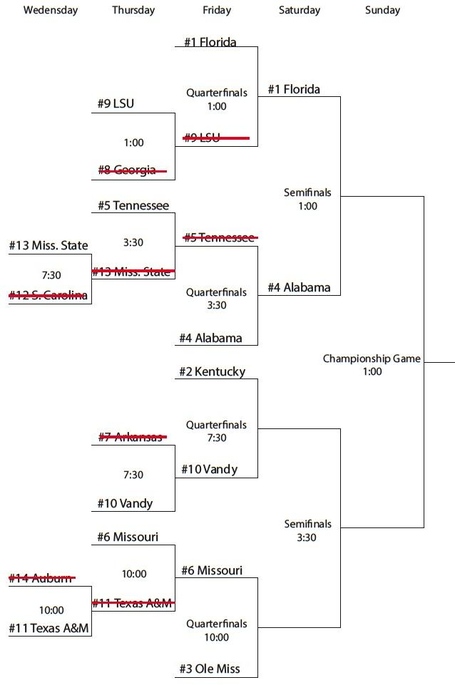 Kentucky plays Vandy tonight at 7:30 ET. A loss to Vandy would be a bad loss to Kentucky, and could put their tournament chances back into question. Important to keep in mind, Big Blue Nation always travels well and Vandy is playing in their own back yard. Should be a lively atmosphere, tune in on ESPN 3.

Ole Miss play Missouri tonight at 10 ET. A win would be huge for Ole Miss since Mizzou is a top 50 RPI (and likely tournament team. If Ole Miss loses, they're out. And this entire post has been a huge waste of my time. This is the definition of a 'must-win'. It's time for AK to bring his team through in one of these tough spots.

On the other side of the bracket, Alabama got a big win against Tennessee, and they likely jumped the Vols on the Bubble pecking order. Florida stomped LSU, as expected. This sets up a semifinal matchup between the Tide and the Gators for tomorrow afternoon.

We've all been anxious a few times in recent years on Selection Sunday. If things play out well for the Rebels, but we don't win the SEC tournament, Ole Miss has an ace in the hole that we haven't ever had. This ace in the hole is none other than Marshall Henderson. We have to remember that the selection process is not a cut-and-dry matter. This is a group of people who choose teams on who is most deserving and most able. Not to mention most marketable. Henderson has been a huge talking point in college basketball this year. If it comes down to us and two or three other teams for the last spot in the tournament, Marshall might push us over the edge. Just a little glimmer of optimism to think about.