Dissecting Hugh Freeze's Hurry Up No Huddle Offense: A Case Study of one Drive

A look at a drive where the Ole Miss Rebels ran the same play five times in a row, resulting in a touchdown against Pittsburgh in the BBVA Compass Bowl.

Share All sharing options for: Dissecting Hugh Freeze's Hurry Up No Huddle Offense: A Case Study of one Drive

Against Pitt in the BBVA Compass Bowl, there was one particular drive which, perhaps as well as any drive the Rebels had this past season, exemplified how and why Hugh Freeze's hurry up, no huddle, spread option offense can be effective if run properly. It took just five plays, spanned 48 yards, and ate up a mere 71 seconds of gametime, and resulted in a touchdown that gave the Rebels a two score lead midway through the second quarter.

During this drive, the Rebs were in a hurry up situation, and did not even need to huddle because, get this, they ran the exact same play for the entirety of the drive. No, seriously, it was literally the same play, run five times in a row, and Pitt was unable to stop it due to the quickness with which the offense set up, the good decisions made by quarterback Bo Wallace, and the execution of all eleven Rebels on the field.

A Youtube video of this drive can be found here (really, it's a video of the entire BBVA Compass Bowl, but by clicking that link you'll start the video out with Pitt kicking off with 7:13 to play in the second quarter).

A poorly drawn diagram of what's going on in literally every offensive play we ran from scrimmage during this drive is right here: 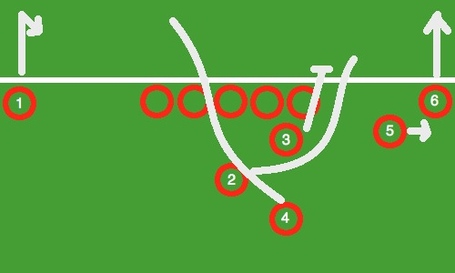 Breaking it down a bit:

Here's how the drive worked, play-by-play:

An extra point later, and it's 21-7 Rebels. In just over one minute of play, Ole Miss moved halfway down the field and into the endzone, snapping the ball five times while running the same exact play without a huddle. To the casual viewer, it looked like a complex set of playcalls, each building off of the prior and carefully thought out in advance, but it wasn't. Seriously, just go watch it. The same players are all in the same position when the ball is set. Every receiver runs the same route on each snap. The line makes the same set of blocks. What makes this offense successful then has less to do with its complexity (admittedly, when looking at this, it's difficult to describe what's going on as "complex" at all) and much more to do with the decisions made by the defense, the decisions made by Bo Wallace, and the general execution of the play by everyone involved. On this drive, Pitt was largely caught off guard and out of position; Wallace made decisions with the ball that took advantage of this; and the Rebel line, backs, and receivers made virtually no mistakes in carrying out their responsibilities. When these three things coalesce, Hugh Freeze can literally call the same play five times in a row and turn it into a touchdown.