Over the course of the next couple of weeks, we will be breaking down the pieces that made this signing class arguably the best Ole Miss signing class in school history. We'll throw in highlight videos whenever we can find them and will try to examine what we see with our biased, untrained eyes. With media and sports fans all over the country talking about Ole Miss recruits, it is our hope to generate some discussion about those recruits who didn't have four or five stars next to their names. For this installment, we're looking at quarterbacks.

The top quarterback out of Mississippi and a Clarion Ledger Dandy Dozen selection, Ryan Buchanan has the frame and intangibles necessary to be an SEC quarterback. He has a strong arm and decent touch on his deeper passes. Scouts say he has good pocket awareness and a generally good "feel for the game," whatever that means. The biggest knock on Buchanan is that he comes from MPSA or MAIA or whatever we're calling it today, which is not an elite level of high school football whatsoever. It's easy for some to be a star at that level of the game; not so much in the SEC.

Still, in spite of his private school experience, coaches and scouts really like the guy, so who are we to judge?

Also, he's the most frat recruit ever.

A bubble 3star/4star guy, Devante Kincade is a guy who a lot of Ole Miss fans haven't raved too much about, which isn't surprising given his longstanding and unwavering commitment to the Rebels leading up to signing day. Remember, we were all geeked about Tobias Singleton and Nick Brassell over Donte Moncrief a few years ago too, and that's primarily because Moncrief's recruitment was drama free. The same can be said for Kincade, who actually committed to the program without even stepping foot on campus (His first visit to Oxford was for the Vanderbilt game, several months after he was committed). He was even seen at the Elite 11 camps this past summer decked head-to-toe in Ole Miss gear, which made it on to ESPN. 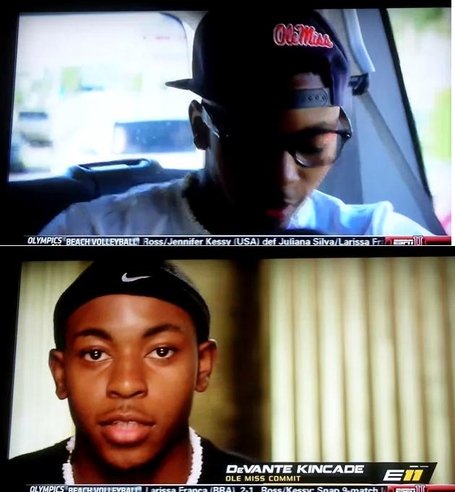 My point is that this guy has been solidly committed to Hugh Freeze and the Ole Miss Rebels for so long that a lot of folks have seemingly taken him for granted. Which, admittedly, is sill rather surprising considering that he was the starting quarterback of Dallas Skyline, a very successful high school program which competes at a very high level.

He does not have the size or powerful arm of Ryan Buchanan, but he does have excellent accuracy, a high football IQ, and good athletic ability for the position. What also makes him a truly valuable prospect in my view is that Skyline runs a read-option spread type of offense, meaning that Kincade has years of experience in a playbook similar to Hugh Freeze's.

Of course, assuming Bo Wallace stays healthy and in school, neither Buchanan nor Kincade will contribute to the program right away. They both could even be redshirt candidates this year. What is exciting to note, though, is that Ole Miss, for the first time in a long time, has successfully recruited not just one, but two highly sought after high school quarterbacks. While a lot of these guys are some of my favorites, neither Bo Wallace, Barry Brunetti, Randall Mackey, Jeremiah Masoli, Jevan Snead, Brent Schaeffer, nor Seth Adams committed, signed, and enrolled with the Rebels right out of high school. They were all either junior college graduates or transfers from other BCS schools. Knowing that we're actually building depth at the quarterback position and allowing for legitimate player development is a tremendous step in the right direction for this football program.