Download the full PDF of this issue of The Local Voice here, or pick up a copy if you're in Oxford.

Share All sharing options for: TLV #173 - The Nkemdiche Factor and Ole Miss Recruiting 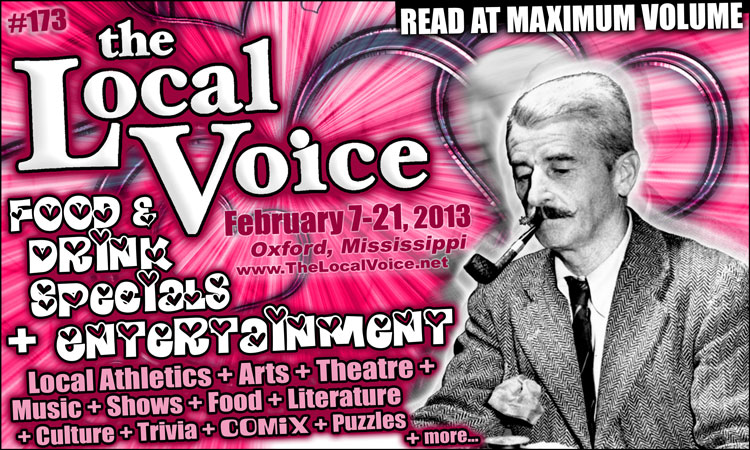 The 2013 Ole Miss football recruiting class is undoubtedly one of the most talented group of football players to ever sign with the Rebel program, and is definitely the single most talented in the "modern football recruiting era" of 365-day-a-year online coverage of the choices made by high school athletes. By most accounts, this group of freshmen footballers who will first compete for the Rebels during the Fall is one of the top ten such groups nationwide, if not top five. The quality of athletes our school has signed mirrors that of the signing classes of Alabama, Florida, and LSU - and indeed, many of the players Ole Miss signed could have easily accepted scholarship offers to the aforementioned schools, among a host of others.

So why, you may ask, did they choose Ole Miss? If they had numerous options available to them, why would they choose a program still recovering from the fallout of the Houston Nutt era? A program whose fan base routinely falls prone to infighting and bickering over trivial matters? A program that does not have the stadium or gameday experience of the bigger, more successful schools against which it competes?

As Rebel fans, we are prone to ask these types of questions. We are, as a result of our collective experiences, incredibly guarded and deliberate with our optimism. We are, at times, beyond honest with ourselves and catch ourselves crossing into downright self-deprecation. "We are Ole Miss," we say cloyingly as a reminder that, in our case, we always seem to come up short of even our more modest expectations.

But for now, and for the sake of this column and its subject matter, I say it is high time for us to (briefly) abandon that line of thought. Instead of a weary and ironic "we are Ole Miss," I suggest a more enthused and confident "we ARE Ole Miss," because when it comes to this recruiting game, we have a lot of great things going for us.

Ole Miss is a beautiful and safe campus nestled in an equally aesthetically pleasing and secure town. The student body and local denizens, for better or for worse, have a reputation of being fun and friendly. The Grove is one of the more unique and talked about environments in all of college football, and our fan favorite players are as revered as any other sort of local celebrity.

Our football facilities, outside of Vaught-Hemingway Stadium, are as well equipped and state-of-the-art as any in the Southeastern Conference. Our Indoor Practice Facility and FedEx Academic Support Center can rival similar facilities across the country. And with new dorms and academic buildings popping up seemingly annually on the Ole Miss campus, it's easy to suggest that our athletes are as well taken care of as any.

Coach Hugh Freeze and his staff are also true assets to our recruiting efforts. They're likeable coaches who have already proven to possess a winning edge, with personalities and acumen that serve them well in their duties. They have made a point of selling the program on its potential a top priority, and have definitely made sure to highlight Ole Miss' track record of successful NFL alumni.

But, regarding this year's signing class, no single factor has played a bigger part in Ole Miss landing some of the country's most coveted football talent than what I call, rather simply, "the Nkemdiche factor."

Due to a set of circumstances and a whole lot of good luck, Hugh Freeze and staff inherited a team that had Denzel Nkemdiche tucked away in the depth chart as a redshirt freshman defensive back. Denzel, once let loose by his coaches, was able to wreak havoc on the SEC, earning freshman All-American honors in the process.

Luckily for Ole Miss, his younger brother Robert was the consensus top overall player in high school football this past year. An inhumanly athletic defensive end out of Georgia, Robert is said to possess professional level talent as a high school senior. Once Denzel was on board with this staff and program, so was Robert, and with Robert came a whole host of top-tier talent yearning to accompany him to Oxford, Mississippi.

Arguably, no person, place, thing, or intangible idea has played a bigger role in Ole Miss' recruiting this year than the interest of Robert Nkemdiche. He alone has given our program a legitimacy that arguably no other person could have. He is the reason Coach Freeze and his Rebel program were able to pull off what would have been unthinkable just one year ago.

No, we don't have the BCS trophies, the 90,000 seat stadiums, nor the Heisman Trophy winners - that's why the teams that do are still recruiting as well, if not better, than we are during our best recruiting years. But we do arguably have as much going for us, outside of those factors, as anyone else in the SEC. Mix in a bit of Hugh Freeze's charisma and Robert Nkemdiche's overtures, and it is no wonder to me why our Rebels are an attractive program right now.