Today is President's Day...
...which means that a lot of us have a day off from work or school, except for employees and students of the University of Mississippi, of course. But neither applies to me, so, to celebrate the president (?) during what is somewhat ironically a day off from responsibilities, here's a picture of Richard Nixon being taught how to use chopsticks. 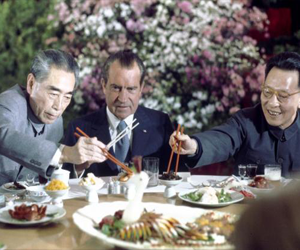 Hail to the Chief, indeed.

Ole Miss Sweeps No. 14 TCU to Start 2013 | WJTV
Well, that's a hell of a way to start the season. The Rebel pitching staff allowed No. 14 TCU to score a mere four runs over the weekend, and the Rebel bats provided the meager run support necessary to earn the sweep. Here are some highlights from yesterday's 5-2 victory:

Ole Miss rallies by Georgia 84-74 in overtime | The Sun Herald
It was not at all pretty - in fact, it was downright embarrassing at times - but it worked. Marshall Henderson scored 25 points and Murphy Holloway added 14 more, which allowed the Rebels to rally and "earn" overtime against the Georgia Bulldogs, during which Marshall Henderson took over the contest. I know we've all lost a little faith in the roundball Rebs as of late, but if they keep winning, we'll be in good shape.

Rebels Beat State 4-2 At ITA Indoors | OleMissSports.com
The No. 12 Rebel netters got their revenge over the No. 10 Bulldogs this past weekend, defeating State 4-2 in the finals of the ITA Indoors in Seattle. Earlier this year, they lost to State in annual Mississippi Cup, held at the River Hills Country Club in Jackson.