Cody Prewitt earned first team all-SEC safety honors today alongside Vanderbilt's Kenny Ladler. Making the second team were Laremy Tunsil at offensive tackle, Evan Engram at tight end (a remarkable accomplishment considering how he missed half of the season due to a foot injury), and Serderius Bryant and Denzel Nkemdiche at linebacker. According to the Twitters, Laremy Tunsil and Evan Engram are the only true freshmen to earn all-SEC honors in school history. 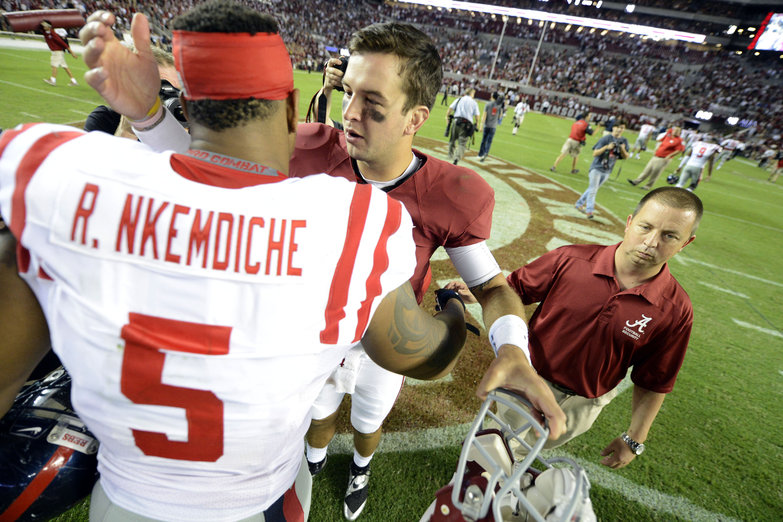 We're gonna get drunk in Nashville again, y'all.

Prewitt led the SEC in interceptions with six, the team in tackles with 70, and added to that 13 passes defended, 4.0 tackles for a loss, and two forced fumbles. Had he been able to hold on to a few more interceptions, he would have likely earned all-American honors.

Laremy Tunsil had an incredible season at left tackle, only surrendering one sack and performing as the only true freshman at that spot in the Southeastern Conference. Evan Engram caught 20 passes for 265 yards and three touchdowns over just seven games. Serderius Bryant tied with Prewitt with 70 tackles and led the team with 10.5 tackles for a loss while forcing two fumbles and notching 3.0 sacks. Denzel Nkemdiche had a more pedestrian year due primarily to a knee injury, but over nine games he notched 34 tackles, 2.0 tackles for a loss, a forced fumble and a fumble recovery.

The full Associated Press all-SEC list can be found here.