The junior quarterback is proving to be one of Ole Miss' most historically prolific signal callers.

Bo Wallace has more total yards in a single season as an Ole Miss Rebel than Eli Manning.

No, really, that happened. Dr. Bo has surpassed one of Ole Miss' favorite children in total offense in a season. 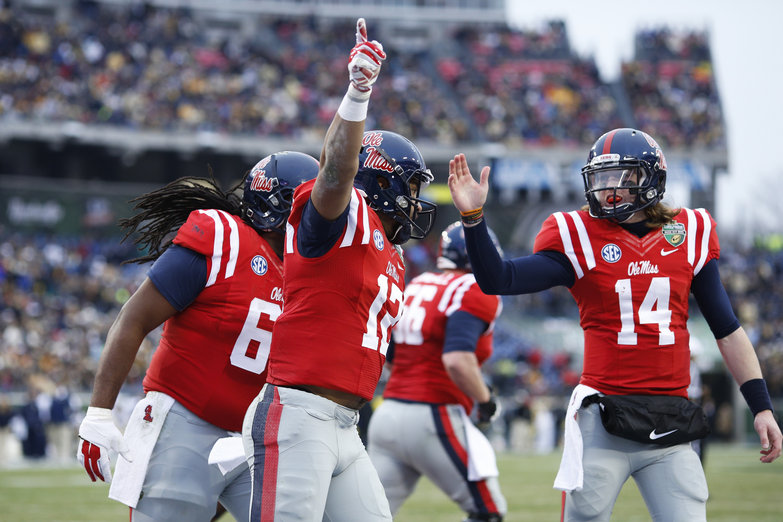 It sure as hell wasn't pretty, but the Rebels hung on to beat Georgia Tech 25-17.

Wallace, who was named the most valuable player of his second straight bowl game this afternoon when the Ole Miss Rebels beat the Georgia Tech Yellow Jackets 25-17, finished the game with 22 completions on 32 attempts for 256 yards and a score (and a pick) along with 86 rushing yards and two scores on 13 carries.

Today's 342 yards of total offense pushed the junior signal caller to 3,701 yards on the season, which betters Eli Manning's 3,572 yards which he earned in the 2003 season. This is now the new Ole MIss Rebel record for total yards of offense from scrimmage in a season.

Granted, Bo had more games to do this than Eli. Had Eli had a full 13 games to work with (a 12 game regular season plus a bowl game; during Eli's year, college football teams only played 11 games a season), he could be predicted to have had 3,870 yards in 2003. His 297.7 yards per game is better than Bo's 284.7 yards per game, so he still holds that record; but, regardless, Wallace is a record breaker.

Never mind! Turns out that the 2003 and 2013 Rebels both played 13 games! So Bo Wallace had more yards total and, therefore, more yards per game than Eli did back in 2003 as well.

When you really consider this record and what it's previous holder means to our Rebels, it's a pretty damn impressive feat. I bet none of us could have predicted this sort of performance out of Bo Wallace at all. Hotty Toddy, and congratulations, Dr. Bo.