Really, how hard is to make C's?

It's looking as though Ja-Mes Logan won't be making the trip to Nashville with his Ole Miss teammates. The senior wide receiver is expected to be academically ineligible when the Rebels take on Georgia Tech in the Music City Bowl on Dec. 30, according to Hugh Kellenberger.

Although nothing has been declared official, Hugh Freeze doesn't sound like he's holding his breath.

"I can't say it's final, but I don't expect him to be with us," Freeze told reporters at practice on Friday. 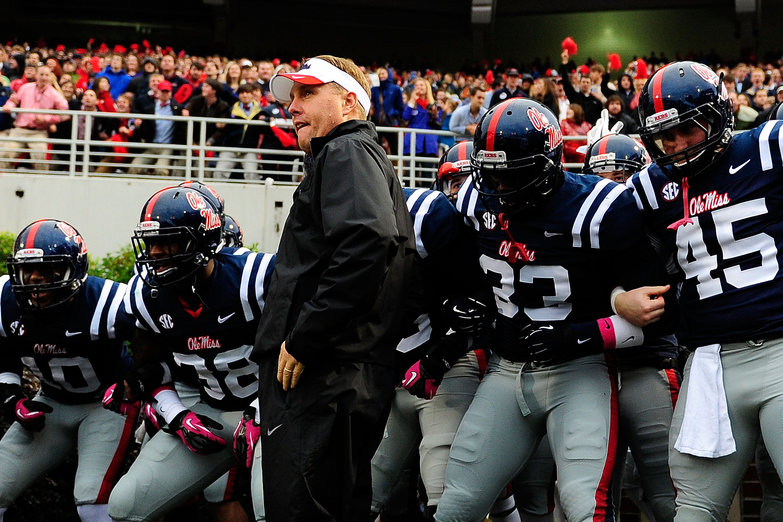 Nice try, Alabama. The four-star safety is sticking with the Rebs.

The NCAA determines a player's eligibility by the most recent grading period. Since bowl games are played in late December, a player's grades in the fall semester can keep him out of the postseason despite having been eligible throughout the regular season.

If this was some freshman it might be expected. As a fifth-year senior who has already graduated with a B.S. in Criminal Justice, this is just inexcusable. I'm not sure what type of grad program Ja-Mes is in, but I doubt it's one of any particular academic rigor (the Masoli route, perhaps?). But what can you expect from a guy who's been mis-hyphenating the name James his entire life.

It was reported earlier this week that Jeff Scott was also at risk of being declared ineligible, but he's since gotten his shit together and will play in the bowl game.

Logan ranks second on the team with 583 receiving yards and has three touchdowns on the season. What doesn't show up on the stat sheet, and what the Rebels will miss the most against Georgia Tech, is his knack for making third-down conversions and big-time plays in the clutch.

I'd expect to see Vince Sanders filling in at the outside receiver position opposite Donte Moncrief, with Laquon Treadwell handling slot duties. Jordan Holder and freshman Quincy "atta boy" Adeboyejo will likely see increased opportunities in the four and five-wide sets.