In Defense of Hugh Freeze

Juco and I sure feel defensive around here. First Bo Wallace, and now Hugh Freeze. Still, we like the debates that have been had, and do wish to offer whatever perspective we can.

Share All sharing options for: In Defense of Hugh Freeze

This ran in last week's The Local Voice, but since there's been some debate around here as of late I figured I'd throw my hat into the ring. Obviously, the content you see herein might be a bit dated, but the overall points remain the same.

We are a week removed from Ole Miss having relinquished the Golden Egg in Starkville after a 17-10 defeat at the hands of the Mississippi State Bulldogs in a contest which could best be described as marking the worst performance of the Rebel football team since the end of the Houston Nutt era. I could go into details but, for the sake of our collective sanity, I will not. Instead, I will explain that game as simply the product of poorly prepared, poorly executed, and poorly inspired football.

Hugh Freeze, as the head coach of the Ole Miss Rebel football program, is responsible for that. He is also responsible for pretty much anything good or bad that happens under the banner of Ole Miss football because, simply, that's in the job description as head coach. It is fair and legitimate to criticize the performance his team and staff put together against a, frankly, bad Mississippi State opponent.

It isn't reasonable, however, to think of this as anything other than its face value. The Egg Bowl loss is not indicative of a greater trend in Magnolia State football, it is not evidence of waning coaching prowess or acumen, nor is it cause to think that this football program is no longer on a path towards a more successful future. It was a bad football game at a horribly inopportune time; it happens.

Hugh Freeze is, regardless of how much the past couple of weeks have stuck in your craw, the right man for the Ole Miss Rebel head coaching job, and he does have this football program trending upward even in spite of last week's loss. 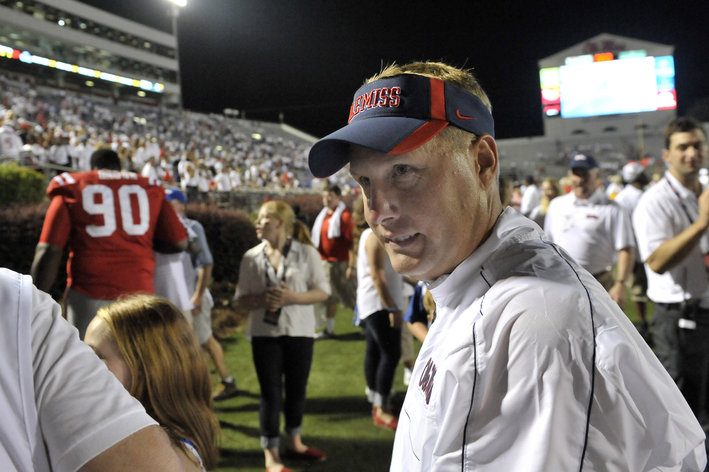 First, consider the shape of the program he inherited. Discipline issues ran rampant, academic casualties were everywhere, talent and depth were missing at so many key positions, and the team had lost enough games to cause many of us to significantly re-evaluate our Rebel football fandom. What did Hugh Freeze do? He plugged in a junior college quarterback - who too finds himself unfairly maligned by Ole Miss fans as of late - and installed an offense unprecedented in Oxford en route to bowl eligibility in his first year on the job. Taking a 2-10 program to a 7-6 one in just a bit over a calendar year is a pretty impressive feat in itself.

Second, consider the improving talent level at Ole Miss under Hugh Freeze's leadership. Consider how he was able to attract players the caliber of Robert Nkemdiche, Laremy Tunsil, Laquon Treadwell, and Tony Conner to his program. These athletes, and so many others he has recruited, could have played more-or-less wherever they wanted to, and they chose a program with an uncertain future because of how much they like Coach Freeze - among other factors, of course. And while another top-5 recruiting class is not likely in the near future, this coaching staff is continuing to attract prospects who could legitimately play for a lot of SEC teams, and raising the overall talent level of the program year by year.

Finally, don't discount who he is when determining if he is a good fit for this program. Hugh Freeze is a Mississippian, who was even born in Oxford. He displays the cool confidence of a rural Baptist preacher. He has good people skills and is willing to do the elbow-rubbing and baby-kissing necessary to represent his university well. He likes chewing tobacco while bass fishing on a private pond (Don't believe us? Just check out his Twitter feed.), and presumably likes his tea on the very sweet side, garnished with a lemon wedge or, if he's feeling adventurous, a fresh sprig of mint. He fits in with those he works for and those who support him as well as any Ole Miss coach since Billy Brewer, meaning that there is good cause to believe that his loyalties to our football program are both real and important to him.

But, again, do not think that all of this is a plea to keep criticism away from our head football coach. He deserves and needs it. Do think of it, however, as our reasons for optimism and continued support of Hugh Freeze as the Ole Miss head football coach. Yes, the honeymoon period between the Rebel fan base Hugh Freeze is certainly over. That's fine, though, because this is still a relationship that should last a long time, even if we're bound to have our spats.