Twenty-five seniors will suit up for a final time at Vaught-Hemingway on Saturday night as the Rebels take on Missouri.

Saturday's showdown against Missouri marks Ole Miss's final home game of the season and, as a result, Senior Day. For the final time in their Rebel careers, guys like Jeff Scott, Mike Marry and Ja-Mes Logan will take the field at Vaught-Hemingway, and we decided it was a good opportunity to take a last look at all of the departing players, from the key contributors all the way down to the no-namers.

Below is a list of all the departing seniors and a brief summary of their careers in Oxford. Seniors that are expected to return with additional eligibility in 2014, such as D.T. Shakelford, aren't included.

A lot of these fellas have accumulated some serious accomplishments over their careers -- setting records, piling up stats and earning a multitude of awards and accolades both on and off the field. The most important thing to remember when looking back on their Rebel careers, however, is that most of them made it at least two years playing for Houston fucking Nutt.

For this we are truly sorry and forever indebted.

[An assist credited to Ghost, who did a fair share of the leg work for this post.]

At 5 feet 7, 162 pounds, Scott may be the smallest player on the 2013 roster, but his impact has been one of the biggest over his four years in Oxford. After two years miring under the Houston Nutt regime, he hit his stride as a junior, leading the team in rushing with 846 yards and found the endzone seven times. The speedy back has been one of the keys to Hugh Freeze's read option attack, and his electric playmaking has been used on special teams as an impact returner. Injury issues have cost him essentially four games of his senior year and cut his 2013 stats, but he's still averaged an absurd 7.7 yards per carry. He's had a knack for pulling out big plays in clutch situations -- his 46-yard rolling catch-and-run against Auburn in 2012 keyed the Rebels' first SEC win of the Freeze era and his 73-yard punt return was the dagger in the Texas victory this season.

Then of course there's this:

Not necessarily gifted with the most expansive set of physical tools on the field, Marry has nevertheless become one of the Rebels' top defenders and is easily the biggest loss on his side of the ball moving into next season. He lettered as a freshman and led the team with 81 tackles as a sophomore. Perhaps his best game came in the 2012 Egg Bowl, when he posted 10 tackles (seven solo), a fumble recovery and a quarterback hurry in the Rebels' ass-stomping of State. Marry was also the recipient of this season's Chucky Mullins award and has rocked No. 38 with an attitude this season. Plus, he has a badass beard that screams "Come at me, bro."

Back when Campbell was the only reliable player on the team during the final Nutt meltdown, you heard a lot of "Campbell for Heisman" jokes. In all serious, the punter has been one of the Rebels' most underrated contributors during his career. The field position battle is an underrated aspect in a day of air-it-out offenses, but his big leg -- he's averaging 45.5 yards per punt this season -- has routinely swapped the field for the Rebels, an attribute that was even more significant back in the days of Nutt's monotonous "attack." As an NFL-caliber punter, his decision to redshirt his senior year was a much more difficult one than Andrew Ritter's, and we salute his selflessness in returning to Oxford for 2013.

Coming into his sophomore year, Sawyer was seen as the best player on the team (he was pretty much the only recognizable face they could put on a billboard in 2011). He hasn't quite lived up those lofty expectations, but he's still provided quality secondary play in a four-year stretch when Ole Miss has been routinely thin on defensive backs, moving between corner and safety. He's had eight career interceptions and his one pick of 2013 came against Zach Mettenberger in the Rebels' upset of LSU.

It took a while for Ja-Mes to get going in 2013, but he's showed up in a big way over the past month. In back-to-back games against Idaho and Arkansas, he had 232 yards receiving and three touchdowns. The tall, rangy wideout hasn't been used as much in the redzone as you would expect -- he has just six career receiving touchdowns -- but he's been one of the most reliable third down options on the team during his four years. He converted in several crucial situations against LSU this season, including a monster 14-yard reception on 3rd-and-10 on the Rebels' final drive. 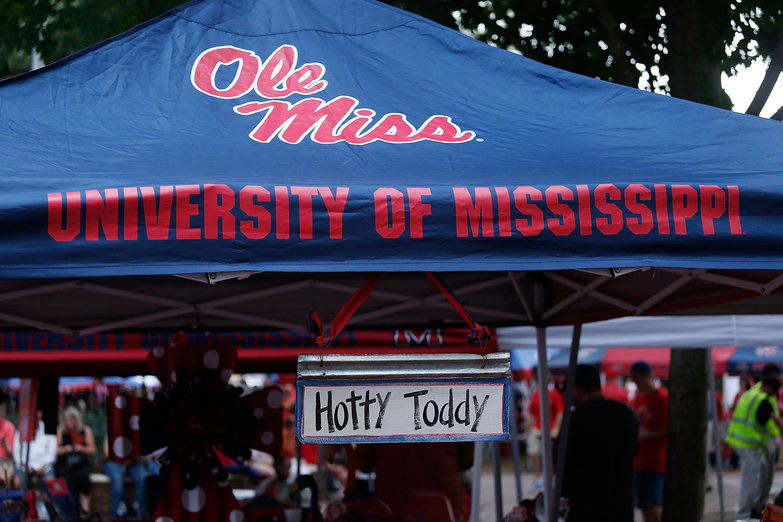 Want to meet the real-life versions of your fellow Cuppers in the Grove before Mizzou? Probably not, but there's lots of booze, so come anyway!

Patrick Junen - G - 6'7" 349 lbs - Huntsville, Ala.
Junen walked on to Ole Miss only to earn a scholarship after seeing a lot of playing time as a true freshman. He battled injuries for a lot of his career, but was a significant contributor at guard. He was also a model student athlete, working towards an engineering degree (Of what sort? I don't know. Sue me.) during his time with the program.

Andrew Ritter - K - 6'3" - 216 lbs - Jackson, Miss.
Thank you so much for taking your redshirt last year and setting yourself up for what is perhaps the greatest moment experienced by any Ole Miss kicker ever.

Cameron Whigham - DE - 6'3" -255 lbs - Snellville, Ga.
Cameron Whigham is a guy who produced more than a lot of us expected to. He's been productive in a bad situation at defensive end this season, and his sticking with the program to earn his playing time is worthy of our respect.

Dehendret Collins - DB - 5'10" - 185 lbs - Meadville, Miss.
Collins struggled at times as a defensive back, but he was able to make some big plays in limited action. Most notably, Collins had a drive killing pick against Mississippi State in last season's bowl eligibility-clinching Egg Bowl win in Oxford.

Evan Swindall - C - 6'4" - 301 lbs - LaFayette, Ga.
Centers don't have it easy, and while Swindall is hardly the best center Ole Miss has ever had, he held his own against great SEC defensive lines and made few mistakes. In a hurry up offense like Hugh Freeze likes to run, centers have to quickly set and snap the ball, and make sure the rest of the line is prepared and fully aware of potential blitzers. It ain't easy, but he does it well. He'll definitely be missed.

Pierce Burton - OT - 6'6' - 290 lbs - Sacramento, Calif.
This guy bailed the Rebels out last year. After Houston Nutt, we were screwed at right tackle. Pierce came in as a junior college transfer and started right away at a very demanding position, and contributed well enough to get this team to bowl eligibility. He has been responsible for a lot of penalties, but his overall body of work is impressive.

Emmanuel McCray - OT - 6'5" - 320 lbs - Jackson, Miss.
I kinda feel bad for McCray. By all accounts, he's a great guy and teammate, but he never proved himself to be anything more than an average offensive tackle. His having lost his starting position to Laremy Tunsil this season (who is a monster, by the way) wasn't particularly surprising, but even then it's good to see him still contribute up front this season in certain blocking situations.

Brishen Matthews - DB - 6'0" - 197 lbs - Monticello, Ark.
Remember when he scrambled his brain clobbering himself into a Kentucky player? That was neat. Other than that, he got a lot of tattoos and grew his hair long. Keep on being you, Brishen.

Barry Brunetti - QB - 6'0" - 223 lbs - Memphis, Tenn.
I love Brunetti. I'm happy he transferred from West Virginia to Ole Miss, and I'm glad he's found a meaningful role in this offense. I really think his change of pace style will be missed a lot last year, and I think his serious running threat provides for an offense that contrasts sharply with the looks Bo Wallace usually gives.

Jared Duke - G - 6'7" - 377 lbs - Cleveland, Tenn.
Remember when Duke was looking for Hugh Freeze after the LSU game? He and Patrick Junen were trying to dump Gatorade on coach and couldn't find him? Man, that was funny.