The Pride of the South: smeargle's Alumni Band Weekend

I'm a band alumnus. I'm proud of this. This past weekend, I spent some time playing with the Ole Miss Alumni Band to give the Cup a perspective on what it's like to be a part of such an important part of Rebel game day. Don't forget to support your Ole Miss band today!

Share All sharing options for: The Pride of the South: smeargle's Alumni Band Weekend

As someone who marched four years with the Pride of the South, one of my favorite aspects of any Ole Miss game day is the band. From the Grove routine to the songs during the game, the band still holds a special place in my heart. Many of my favorite (and least favorite) memories of my undergraduate years come from being in the band. There is a special connection to the university that I feel comes with being a direct representation of your alma mater, and that connection still lives with me today.

At the same time though, it's a lot of work. Not many fans realize the time commitment and sacrifices that band members make every week. Take the following into consideration:

That said, it can be tough to be in the band, but it's a labor of love. It's something that is a lot of fun to be a part of and, at the very least, you get to watch a lot of SEC football. But enough of the past. Here’s a look at my last weekend spent with the 2013 Pride of the South Alumni Band:

Friday night we met in the band hall to rehearse. Mr. David Willson (who has been leading the band since 1991) started us off with a run through of the current Grove routine. I was very nostalgic playing through the exact Grove routine I did in college...all save for one song… 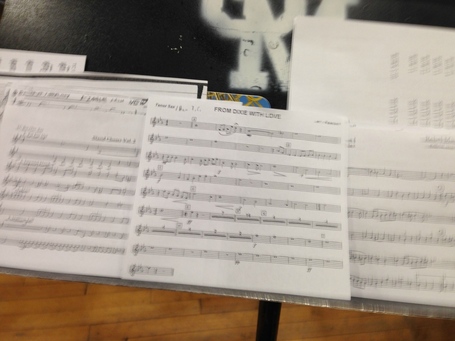 I doubt I have to tell many of you over the age of 25 that From Dixie with Love is one of the most revered songs ever played by the Ole Miss band. As Dr. Luther Snavely (director during 1971-1987 who brought FDWL to Ole Miss) took the podium, he told a story about one of the band’s trips to Death Valley and how the band, upon finishing FDWL, received a standing ovation from the LSU fans. As he directed us through FDWL, many onlookers got out their phones to record a performance of a song that hadn’t been played live in over four years. The following video doesn't do it justice.

Saturday morning the alumni band met at the practice field in order to walk through the Grove routine and "stand still" half time show with the student band. Afterwards, it was Grove time. Unfortunately for me, it was still too early for any of my Grove crew to be at our tent for a quick bloody mary before the Grove routine (shame on y’all if you’re reading this).

The Grove routine itself was a lot of fun. On our way to line up in front of Ventress for the march to the stadium, the Powe’s Catfish Shack tailgate had a fog machine pumping out smoke as we lined up to march. As silly as it sounds, this was a very cool way to support the band, and I hope they continue to show this kind of appreciation for them in the future. Mad props to the shack. 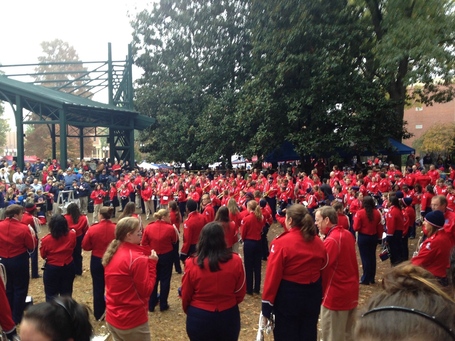 We marched to the stadium. Our seats were in the north end zone bleachers. As a side note, with tickets in north end zone for the Troy game having been anywhere from free to three dollars a ticket, one sees many an interesting character on a non-SEC weekend. Granted, I realize most of our games have been "sellouts", but if any right minded person thought that the 150 member alumni band wouldn’t be able to squeeze into the upper corner sections of the south end zone for the Troy game, I r disappoint. However, being able to watch Laquon Treadwell break five tackles into the end zone from 20 yds away instead of 120 was pretty great. 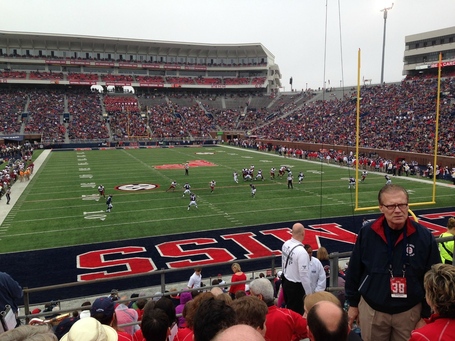 I’m TOTALLY sure that y’all remember the halftime show amirite!? Ray Charles medley of "Georgia on My Mind, What’d I Say, Hit the Road Jack, and all of your other favorites!? Oh yeah, y'all loved it.

Alfred/Jeeves/Belvedere/Farnsworth! Freshen me up another beverage! Make it in a jiffy please! Tip tip! Oh look! The band! Be sure to put another silver dollar in the tip jar on our way out!" 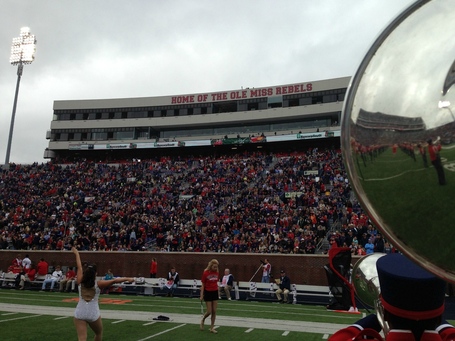 One of the coolest things about the halftime show is being on the field itself at the end of the second quarter. As a high school band nerd, one of my "burns" towards football players that bullied me would be "Well at least I see the field more than your bench warming ass!" ZIIIIINGGGGGG!

I didn't do that this time.

As Mike Hilton made his interception towards the end of the 2nd quarter, I was able to snag some cool close up pictures of the team congratulating him. 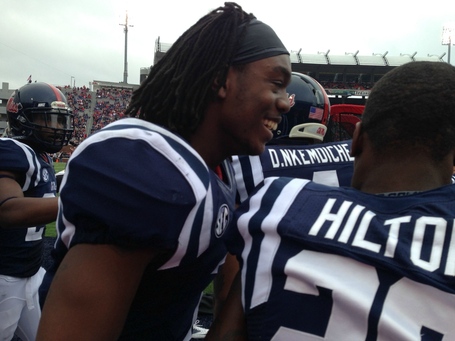 After the longest sober second half I've ever experienced, we had a "battle of the bands" of sorts against the student band. Many thanks to the student band (and the hyped up crowd in the Vaught as evidenced in the photo below!) for sticking around to partake in this alumni band tradition! 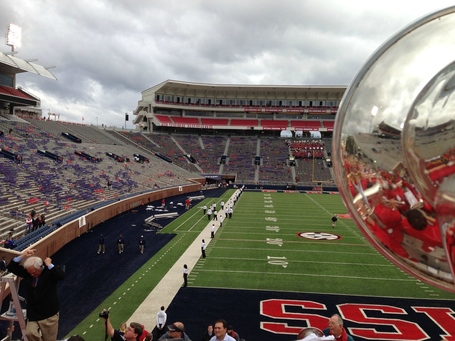 So, after this weekend, I have a few shout outs to offer:

Seriously, next time you see a band member, take a hot second and thank them for the time and effort they put into being a positive representation of our university. They need and deserve it.