How do the Ole Miss Rebels stack up against the Pittsburgh Panthers? (How we do this is laid out here.)

I've got to hop in a car and drive to Birmingham in a few minutes, so I'll keep this as brief as I can. The story of the Panthers' season goes that Pitt is a very well-rounded team with an especially stout defense that just couldn't put it all together at times. How does that shake up in the numbers? And how does that compare to Ole Miss which, frankly, has a somewhat similar narrative albeit not as assertively stated?

In scoring and total offense, the Rebels do have the advantage, even if slightly. Pittsburgh does have the edge, and more significantly so, on the defensive side of the ball. Also, outside of rushing yardage, there is nothing that Ole Miss can really boast offensively against the Pitt offense unit-by-unit, and that may have as much to do with Hugh Freeze's reliance on the zone read this season more than anything. Pitt's defense also betters Ole Miss in every category involving points and yardage, but the Rebels have done a better job getting to the passer, stopping opponents on third down, and stopping opponents in the red zone.

One of Pitt's major advantages - and this would explain their yardage numbers a bit - is their stinginess with the ball. They simply don't turn it over much at all, whereas our offense can be pretty haphazard at times. Where we outplay them in the mental aspect of the sport is penalties, with the Panthers earning almost double the penalty yards per game that the Rebels do. 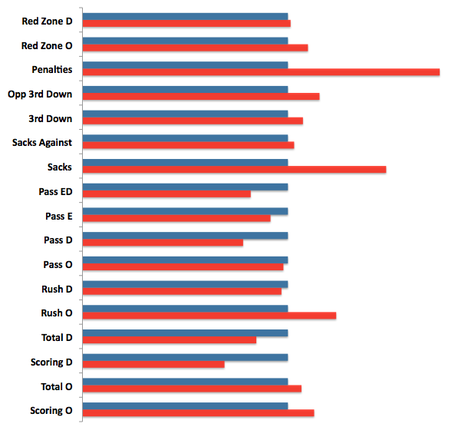 So, if you thought that a pair of 6-6 teams would match up well, you were right. Congrats. I'll see you in Birmingham.