TLV #172 - The Madness of Marshall Henderson

Download the full PDF of this issue of The Local Voice here, or pick up a copy if you're in Oxford.

Share All sharing options for: TLV #172 - The Madness of Marshall Henderson 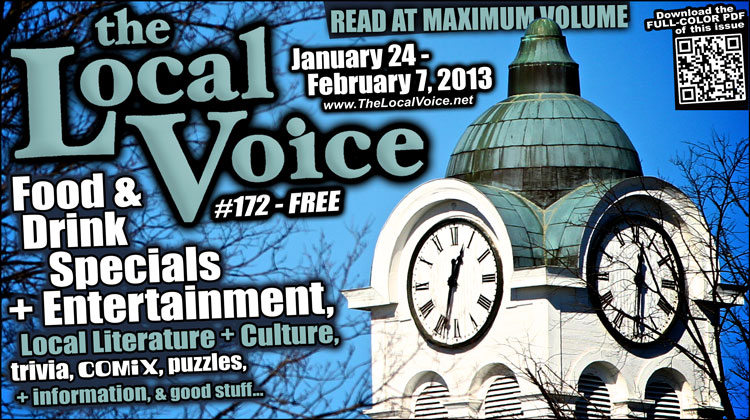 Heading into the third weekend of conference play, the No. 23-ranked Ole Miss Rebels currently share with the Florida Gators the lead in Southeastern Conference's men's basketball standings.

That is not a typo. That is not an editorial mistake. And that is not a fact which has yet to seem like some sort of a fluke. The Roundball Rebs are one of the hottest teams in the conference this season, and only look to continue their winning ways this weekend against Tennessee (Thursday at 6:00 PM in Oxford) and Auburn (Saturday at 7:00 PM at Auburn) - with the former being a team the Rebels already defeated once this season by 18 points and the latter performing statistically in the bottom half of the conference.

So while the Rebels were a good-but-not-great basketball team last year, barely missing out on the NCAA tournament after an impressive run to end the regular season and conference basketball tournament, this year's squad seems ready to finally get over that hump and into the big dance. At the very least, if selection Sunday were this Sunday, the Rebs would get the invite. Among the major college basketball writers, such seems to be a foregone conclusion at this point.

So what is the difference between this year's team and last year's team? Aside from a generally experienced ballclub bolstered by some surprisingly adept freshmen, the biggest difference between the 2011-12 Rebs and their 2012-13 counterpart is the presence of junior college transfer shooting guard Marshall Henderson, a player who is slowly emerging as one of the SEC's more nationally prominent stars.

Of course, this is not to downplay the significance of Reginald Buckner, Murphy Holloway, Nick Williams, and Jarvis Summers to this team's success thus far. A basketball team is far more than just one person. But when watching the Rebels play this year, one cannot help but notice the impact that Henderson has on the game, the fans, and his teammates. Not only is he a skilled scorer, leading the SEC with 18.9 points per game so far, but he also possesses an absolutely off-the-wall, electric personality that makes him both a Rebel fan favorite and persona non grata to pretty much everyone else who watches SEC basketball.

He is no taller than six-foot-two, and can't be much heavier than 160 pounds when soaking wet, making his fearlessness and confidence on the floor seem wholly out of place. When he is playing well, expect inscrutable hand gestures, random bouts of shouting, and earnest pleas of increased excitement out of the Rebel fans in attendance. When he is playing poorly, well, it is a lot more of the same. In success or failure, he is an absolutely high-motor, in-your-face type of player who comes off as absolutely needing to win every game he plays. Not wanting. Needing.

Heck, to the untrained eye, he looks downright crazy out there; but for some reason or another it works.

Thus far this season, the greatest showcase of Marshall Henderson's basketball acumen and emotionally charged approach to the sport came this past week when the Rebels notched an impressive come-from-behind victory over the Vanderbilt Commodores in Nashville's Memorial Gymnasium, a venue in which the Rebs have not won since 2001. At one point in that game's second half, the Rebels trailed the ‘Dores by 13 points, but with just a pair of minutes remaining, they would take and attempt to defend the lead. Vanderbilt, however, would not go quietly. Shooting lights out basketball for the entire contest, the Commodores seemed to put the game away on a three-point shot which left just over three seconds of game time on the clock.

Fortunately for the Rebels, that was just the right amount of time Henderson would need. Whereas most players and teams would lose a great deal of composure after surrendering a tough shot in the game's waning seconds, Henderson and his teammates did not, and set up a play which allowed the star guard to nail a buzzer-beating three from just beyond half court and send the contest into overtime.

Just as you'd expect, the madness of Marshall Henderson came forth and, in front of a televised audience, introduced itself to the nation. He sprinted across the floor towards the opposing bench, then towards the Vanderbilt cheerleaders, then towards the Rebel fans where his teammates, hanging off of him in celebration, could hardly slow him down and bring him back to the team bench. And, of course, he was screaming his head off the entire time.

In overtime, the Rebels, led by you know who, scored 11 points. Vanderbilt scored one. Henderson's electric, gutsy, and downright entertaining style of basketball carried his team out of a deficit, saved the game by the hair of his (well trimmed) chin, and sealed the deal at the end to earn an elusive conference road victory.

This is not meant to be a criticism of Henderson at all. It is just that I cannot recall an Ole Miss player who took the floor with such energy and passion for the sport. When that energy and passion contributes to team success, one cannot help but notice and enjoy it. He might be an unashamedly in-your-face lunatic, but he is our unashamedly in-your-face lunatic, and so long as he can continue to excite us fans and keep the wins rolling in, I doubt any of us will have a problem with him.

The rest of the SEC though? Well, let's say that I can't blame however they may feel about the guy.

Hotty Toddy and Pack the Pad!