Statistical Analysis: How much better is Alabama than Ole Miss?

The Crimson Tide is the best team in the country, but just how good is that?

Share All sharing options for: Statistical Analysis: How much better is Alabama than Ole Miss?

Through just four games, Ole Miss can boast among its SEC compatriots the third most offensive yards per game, the most rushing yards per game, the third most sacks, the highest third down conversion rate, the second most prolific red zone defense, and a multitude of other measurables which serve to demonstrate that the Ole Miss Rebel football team of 2012 is in significantly better shape than its 2011 version.

But how does team, even with its statistical improvements, compare to the team which they will be playing this weekend, the consensus number one ranked Alabama Crimson Tide?

The brief answer to that is "not all that well, for the most part." The more in depth answer is that, "while this team has come a long way, it still has a long, long way to go, and this weekend should demonstrate that."

To go about looking at this, I pulled the stats from the SEC's official page in the categories which I think best demonstrate the particular skills and abilities of a team and coaching staff to win games. This is most anything involving yards, points, turnovers, and so forth. This is not statistics regarding time of possession, number of plays run, number of first downs gained, or anything along those lines because those types of numbers are more indicative of the type of offensive system a team runs and not necessarily how well they run it towards the end of actually winning a football game.

But instead of just comparing numbers to one another as raw data, I wanted to show how well these stats line up relative to each other. That becomes difficult when comparing statistical categories with varying units of measure (how do you compare a completion percentage to penalty yards, for example?), so I created a ratio for each statistical category.

The ratio was determined by the nature of the statistic. Most of them were "Ole Miss/Alabama=X", but for some statistics that offers up a really, really skewed number which, in turn, skews the chart altogether. For those statistics, all of which were statistical categories where a smaller number is an indicator of success (such as rush defense per game), the ratio was flipped to "Alabama/Ole Miss=X". This isn't cheating, I promise.

(Or, hell, maybe it is. Paging Nerd The Rebel and Me and Paul here.)

So what you get is this "betterness" ratio which, for each statistical category, shows how much "better" Ole Miss is than Alabama. So, for example, Alabama scores 42 points per game while Ole Miss scores 36.8 points a game. This means that Ole Miss is 88% what Alabama is in scoring offense after four weeks.

To chart this, I simply took the ratios (again, either Ole Miss/Alabama or Alabama/Ole Miss depending on the nature of the statistic) and charted them against Alabama/Alabama or, for those of you who are really, really terrible at math, one. The results of this are below, and if it is somehow not yet plainly obvious to you, the blue bars indicate Ole Miss' statistical prowess in relation to Alabama which is basically held as a constant or the standard by which the Rebels are judged in each category. 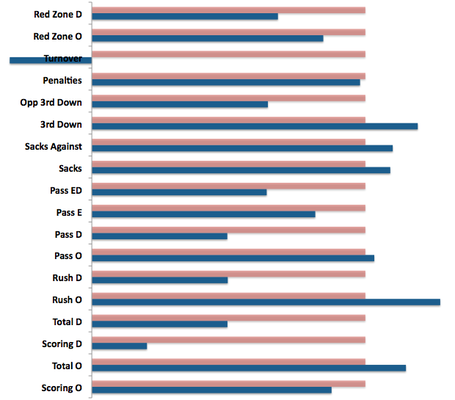 So as you can see, there are only a handful of statistical categories which the Rebels hold the advantage over the Crimson tide, and even then those advantages are mostly nominal. The only statistic which Ole Miss can legitimately point to and say "so far, we've done that much better than they have" is rushing yards, a statistic which the Rebels currently lead the SEC in and hold a 55 yards-per-game margin over the Tide. Outside of that, though, Alabama's advantages become very clear.

They're tough to move the ball against, and even tougher to score against. They are an incredibly balanced team, excelling fairly equally in all aspects of the sport. They commit few penalties and even fewer turnovers.

To put it simply, they're just a really, really good football team.

If I were to glance at these numbers in an attempt to form any sort of prediction regarding this Saturday, I'd have to say that a Texas game redux of sorts is in order. The margin of victory is going to be pretty wide, in spite of our best efforts. We will struggle if not downright fail to keep them form scoring, while we will have significant difficulty doing so on our end.

Of course, that's just what the numbers tell us. Games aren't won or lost on paper, any given Saturday, there's a reason you play the game, et cetera and so on and on with the cliched expressions. So, sure, anything can happen. Just don't bet on it.