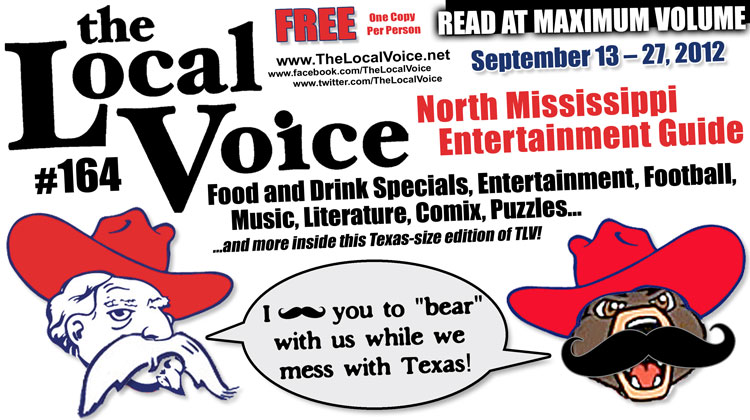 Two weeks into the season and the Ole Miss Rebels are 2-0, and convincingly so. A new offensive system, a new quarterback, a new coaching staff, and a new attitude about Ole Miss athletics have re-infected the Rebel faithful with football fever, and just in time for what is perhaps the most noteworthy out of conference opponent the Rebels have faced since a defeat of the Notre Dame Fighting Irish in the 1970's.

The Texas Longhorns, one of the most storied programs in the history of college football, will be spending a weekend in our fair Oxford, bringing with them a small army of burnt orange and white-clad fans, primetime ESPN exposure, and the eyes of the college football watching world. This has potential to be a big moment for our program moving forward, something which I am certain is not at all lost on new Head Coach Hugh Freeze.

It seems a bit unfair to see a young and inexperienced, but wholly optimistic and enthusiastic football coach like Hugh Freeze thrust into such a high profile moment so soon in his career. But here we are, and here he is, and we at the Cup are fully confident that he is up for this challenge.

But to which challenge am I referring, exactly?

Of course there is the general challenges any coach faces. There is the gameplanning, there is the scheming, there is the designing of plays, the motivation of players, and the preparation of the coaching staff. But the biggest challenge this young coach and his rebuilding program will undergo this weekend will come long after the final seconds have ticked off of the clock on Saturday.

It is, admittedly, a long shot to project an Ole Miss win. This is a team which, as I am sure you all would rather forget, only won two games last season. Issues of player recruiting, development, and attrition have had a ripple effect of sorts, and will continue to for the next couple of years. To put it simply, we are behind the eight ball right now.

Texas, on the other hand, while coming off of a pair of underachieving seasons, still has talent, resources, and momentum as a program which our Rebels lack. They are favored to win on Saturday, and there are reasons for that.

Still, if Ole Miss were to win, Hugh Freeze's will need to temper expectations of both his players and of Ole Miss fans. Wins, if poorly managed, can lead to complacency. As we observed under the previous regime, a team which is too confident of itself, for whatever reason, will lose games to teams it should not. Take the 2008 season for example, where the Rebels sandwiched a win over the #4-ranked Florida Gators in the Swamp with baffling losses to unranked Vanderbilt and South Carolina at home. That season, the Rebels did not live up to their full potential, as I see it, primarily due to the poor mitigation of expectations and anticipations.

The other side of that coin, of course, is ensuring that if the more likely scenario of a Rebel loss is to take place, that such an event does not signal the beginning of the end of a still young season.

Last season, the our Rebels gave away a fourth quarter 14-point lead to the BYU Cougars at home during the season opener. It was a close, hard-fought game, but in the end the Rebels lost. From that point on, the season was all but over. Aside from a hard fought game against the Arkansas Razorbacks, the Rebs did not play four full quarters of full throttle football. An early loss, and a handful of subsequent losses coupled with a poorly managed firing of Houston Nutt led to complacency, laziness, a lack of discipline and a sharp decline in the quality of football being played at Vaught-Hemingway Stadium.

This is Hugh Freeze's biggest challenge, to ensure that the problems which have plagued this program over the past several seasons do not continue to hamper it. Already we are beginning to see an increased effort and improved attitude out of the players and coaches, but the season is still young and, hey, we are winning. If and when a negative turn of events occurs - and it is bound to occur, this is football we are talking about - will this team be able to recover. In addition, if this team is to experience moments of incredible achievement - again, entirely possible - will it be able to build on that achievement as opposed to resting on its laurels.

I have confidence that Hugh Freeze, his staff, and his players are up to this challenge, and I hope that is something we will be able to observe this season and in future seasons.