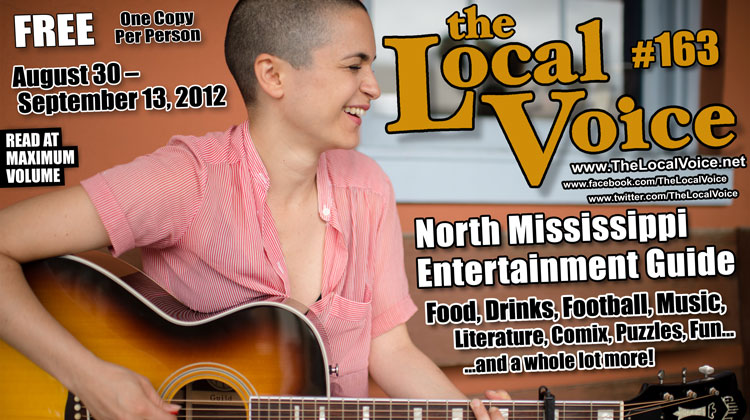 Here's my annual "rah rah just be a good fan and cheer and stuff" column for Red Cup Rebellion via The Local Voice. Pick up a copy, click the image to download a PDF version, or click on the jump below to read our biweekly column.

So here it is Rebel fans. Here is the first week of the 2012 Ole Miss football season, and in spite of our collective modest outlook on this team's future, there is a sense of renewal in and about Oxford as Hugh Freeze, a native son of these here parts and a man whose career has several ties to Ole Miss Rebel football, has taken over the program from Houston Nutt.

With this program's new life comes newer hopes and expectations, most notably that this program should not do something like, you know, lose a season-opener to a football team representing a school in a lower division ever, especially at home.

Basically, we don't want this team to pull a Jacksonville State game circa 2010 type of fiasco. Our apologies for bringing that game up. Go ahead and step outside, take a few deep breaths, and come back to your copy of The Local Voice when you cool off.

Anyway, we Rebels expect this team to actually look and behave like an SEC team. That is not necessarily to say that we expect national championships, primetime television coverage week-in and week-out, and Heisman Trophy Hype - even though that would be highly welcomed. Rather, though, we expect this team to have the look and aura of a football program which is a part of the premier football conference in all of the college game. Specifically, we want this team to win games that it should and do so convincingly.

This weekend is one such game.

The Univeristy of Central Arkansas Bears are not exactly a bad championship subdivision team. But they are just that: a championship subdivision team. Yes, they had an impressive 9-4 overall record with a 6-1 mark in conference. Yes, they have a few castoffs from bigger schools - most notably former Ole Miss Rebel wide receiver and kickoff return specialist Jesse Grandy - and are pegged to be one of the more talented squads in the Southland Conference. But, again, they are not of the caliber opponent that should defeat Ole Miss.

Really, they should not even come close.

We are confidently able to say that because, Hugh Freeze, as the head coach of last season's Sun Belt Conference champion Arkansas State Red Wolves, led his team to an easy 53-24 victory over Central Arkansas. That Red Wolves team had 646 total yards, 345 of which were rushing yards; averaged 7.3 yards per play; and scored no fewer than nine points in any given quarter.

At one point, Arkansas State scored 23 unanswered points. They put the Bears away and looked at ease in doing so.

As goofy as it may sound, Hugh Freeze's "win the day" mantra does have something more than its superficial meaning. Competitions, especially football games, are mostly won before they even begin. Intense preparation, on behalf of the players and coaches - and fans, prepare thy liver for this weekend, y'all - leads to tremendous on-field success. Studying the game to understand all of the underlying theories and nuances that make the sport so interestingly complex leads to on-field success. And having a tremendous passion for a sport and an unrivaled confidence leads to on-field success.

Hugh Freeze certainly is not the best coach in football. Heck, he may not even be the right guy for this job. But he certainly loves and understands football. He also loves and understands Ole Miss. He is confident. He is passionate about his job and truly admires his players. All of those factors are the exact reasons why none of us should ever anticipate a repeat of the Jacksonville State game under his watch.

We at the Cup are cautious to predict anything too concrete regarding this season or those of the future. We are not even sure if we feel coach Hugh Freeze will benefit this football program long-term.

We are sure, though, that he will work tirelessly to win the day, which is exactly why we are confident that, for this weekend at least, he will win the game.