Share All sharing options for: TLV #161 - Penn State, Ole Miss, and the Sins of our Fathers

[HT: to RobRob, Handsome Sam, et al who helped inspire this during our earlier discussion on the Penn State scandal and subsequent NCAA sanctions. It was truly an illuminating discussion, and I tried to capture what I thought was an important takeaway from it in less than 800 words for this issue of The Local Voice.] 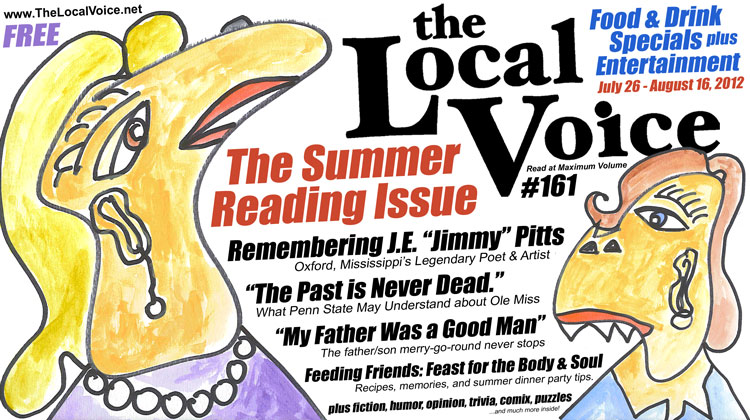 The horrifying child molestation scandal at Penn State University all but came to a close this week, as the NCAA and Big Ten conference levied sanctions against the university and its football program which are severe enough to have repercussions which could last decades, if not longer. From a football standpoint, one of college football's winningest programs is all but dead, as scholarship limitations, postseason bans, and multimillion dollar fines are now in effect for the next several years.

After at least a decade's worth of institutional cover up of widespread child abuse in the football facilities of Penn State University came to light, everything justice seemed to have to offer came swiftly and decisively. Joe Paterno, and his legacy as one of the greatest coaches and people in the history of one of America's most celebrated sports, is dead. Jerry Sandusky is in prison for a de facto life sentence. Plaques, awards, statues, trophies, and nearly anything else tied to those two men, have been removed. The football program those two worked together to create and lead will struggle mightily to become what it once was.

But, even after all of that, Penn State's punishment is not over. Far from it, in fact.

If there is something that we Ole Miss Rebels can understand, it is how collective memory, historical context, and an innate human desire for atonement work together to insure that, in the words of William Faulkner, "the past is not dead."

In just a few short months, Oxford will celebrate the 50-year anniversary of Ole Miss' integration, an event which was not particularly a cause for celebration in 1962. We all know the story of what happened - of the abuse James Meredith received, of the disregard for law enforcement, of the violence and destruction which left many injured and two dead - and we all understand that and subsequent events' lingering effects on Ole Miss and Oxford today.

Even though the Oxford of 2012 is a far cry from the Oxford of 1962 in terms of student race relations, campus safety and openness, and institutional control, the legacy of our violent past lives on. Despite our efforts at inclusion, many still believe Ole Miss to be an inherently bigoted institution. Despite the current people, places, and events which make Oxford a wonderful place to live, few mentions of the place in national media are without references to its past. Despite the largely tolerant and peaceful Ole Miss student body, a perception of racial hostilities continues.

Penn State will, like Ole Miss, be known for as long as it continues to exist as a school at which something morally reprehensible, if not outright terrifying, took place. It will be known as a place that forever negatively altered the lives of several people, and it will constantly be reminded of this as it works to shed itself of that difficult path and redefine itself in the face of counterproductive internal squabbles and an ever negative public image.

I do not mean this to at all be some sort of statement against the punishments levied against Jerry Sandusky and Penn State. While I don't always agree with the motives and intentions of the NCAA, I do think that such institutional punishment of the Penn State athletics program was necessary in the wake of such an institutional failure. I also feel that the students, alumni, and fans of Penn State who remain in support of Joe Paterno - the very people who wailed and weeped at the sight of his statue's removal from outside of Beaver Stadium - are too wrapped up in their college football fandom to see how they themselves are falling on the wrong side of history here.

I just mean this to point out that we can draw a lesson from this from our own experiences, and that's that what we do today - as football fans, as friends, as family members - can and will have a significant impact on people who aren't yet even born. It's a cruel fact of life, but it's still a fact: consequences linger, and are suffered collectively.

A generation or two from now, when Penn State fans get an uneasy feeling in their stomach seeing or hearing yet another mention of Joe Paterno's now ruined legacy and the reason for that ruin, they too will understand what we at Ole Miss have already learned.