Share All sharing options for: EA Sports NCAA 2013 Team Rankings - Where does Ole Miss Stack Up?

For those of you who care not about the football prowess of you favorite school's collection of pixellated polygons, the folks at Tradition Sports Online have all of the information you need. And, in the case of Ole Miss, that prowess isn't particularly good, but it could be worse which, all things considered, is lighyears ahead of what we likely should expect.

If you're one to play EA's NCAA, expect the Ole Miss Rebels to be the 12th best team in the Southeastern Conference which, now that the league is a 14-member institution, isn't the worst case scenario. Ole Miss is ranked alongside Kentucky and a few points higher than Vanderbilt overall. According to the same rankings, Ole Miss is one point better than Vanderbilt on offense, good for 13th, and tied with Mizzou and Tennessee as having the 10th best defense in the conference, which is better than only Kentucky and Vanderbilt.

Nationally, Ole Miss compares with Arizona, Illinois, Duke, Iowa State, and Southern Miss. In fact, Ole Miss is, across the board, rated identically with Arizona. This is "good" for 61st overall, 70th in defense, and 42nd in offense.

So good luck winning out this year (unless you're a sissy who plays the game on the easiest setting, which means that all you have to do is not eat your controller to win most games).

Ole Miss' standings in the SEC are in the table below. Green cells denote the highest ratings in the league, red denote the lowest ratings, and blue denotes Ole Miss' ratings. An Excel spreadsheet with the same information for every team in the game can be found here. 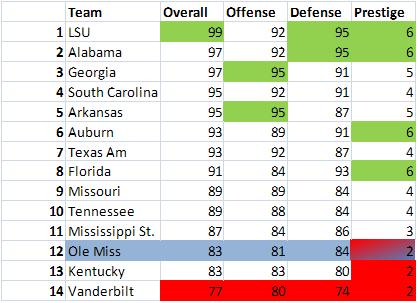