Yesterday, the football coaches released the Ole Miss Post-Spring depth chart. We, as you would expect, have some opinions and observations thereof. The depth chart as released by Coach Freeze is after the jump, with our annotations immediately thereafter. 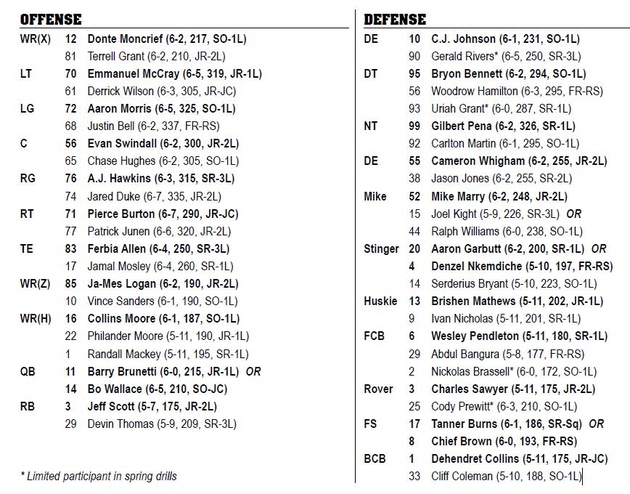 There's not a lot of deviance from what was expected, though there are a few things of note...

1. We ain't got a quarterback.
If Bo Wallace nor Barry Brunetti can break free from this dead heat and assert himself as the starter, it's not because both of them are "just that good" at football. We'll leave it at that.

2. Collins Moore is currently listed as a starter in the slot at receiver.
This is surprising to me simply because of the receivers he is listed above. Vincent Sanders, Philander Moore, Randall Mackey, and Tobias Singleton (who has been moved to halfback) were apparently no match for Collins. I've heard he has had a strong Spring, but it's a little surprising that some players who have stuck out a little more in the past or were more highly sought after recruits aren't in that spot. I haven't seen enough of Moore's game to make a judgment call on this one, but the end result gives us two starting receivers who are sophomores and a third starter who is a junior. This should help with the evolution of our passing attack.

2a. Randall Mackey is indeed listed as a wideout.
So that makes the quarterback controversy a bit easier to sort out, we suppose. We don't know why the guy who got a the lion's share of quarterback work last season won't be so much as considered for the position, but we think it's safe to assume that he wasn't as keen on the playbook as Brunetti and Wallace.

3. Ferbia Allen is listed ahead of Jamal Mosley
I can't understand this one. This year is our chance to show some interested recruits that tight end isn't a forgotten position in Freeze's offense. We have a great athlete at the position in Mosley. Yet we're starting Allen over him. I don't dislike Allen at all. I think he has a lot of good game. Mosley simply has a higher ceiling. Whatever games we win this year are going to be built around playing good defense and producing a few timely big plays on offense. We won't be sustaining a lot of drives. I think Mosley gives you the big play ability that Allen doesn't.

4. Our backup left tackle is a walk-on.
His name is Derrick Wilson, and you've never heard of him. Uh-Oh.

5. Senquez Golson needs to come back to the football team and be a difference maker.
As it stands, our current backups are a walk-on, a third year player who hasn't done much, and a player who may or not be eligible tomorrow. Golson gives us another corner who can play good man defense and help our defense's glaring weakness of stopping the pass. Also, he's fast, which matters. We're not ready to entertain rumors of him being a grade casualty just yet for two reasons: we don't want to believe it's true and we're pretty sure every player on the depth chart aside from Andrew Ritter has been mentioned as a possible grade casualty at this point.

6. Serderius Bryant is running third string.
That's shocking to me mainly because I watched Bryant a lot on the field last year. I love his style of play. He has a reckless abandon for his body and explodes into every tackle. I guess it's possible that the coaches haven't gotten a chance to really see that yet since they've only watched him play Rebels vs. Rebels. I'd love to see him get on the field a lot this year.

7. Denzel Nkemdiche might start
Yay! He hits really hard. I'm excited to see what he can do.

8. So we're just abandoning this whole "CJ Johnson at linebacker" thing?
Because that's not really a huge problem. He's significantly undersized for an SEC defensive end, but he's really about it as far as guys who can get pressure on opposing quarterbacks go.

9. The guy who won the Chucky Mullins Courage award isn't a starter.
Pretty sure that's never happened. Again, that does more to explain our lack of significant seniority and depth than it does anything else.

10. Our "Mike" linebacker is named "Mike."
If only Brishen Matthews changed his first name to "Husky". Speaking of...

11. Brishen Matthews is a starter.
We're going to take the most positive thing away from this that we can, and that's that we've got enough guys in the secondary who are athletic enough to play multiple positions, because we've got all sorts of corners listed as safeties and safeties listed as corners and linebackers listed as safeties and, really, we've just got a lot of tweener types. Matthews, Charles Sawyer, Aaron Garbutt, Nkemdiche, Tanner Burns and Chief Brown seem to be relatively interchangeable throughout the secondary. Sawyer is clearly the one with the most big play and NFL potential, but I think we've got a "plug and play" secondary. I know, that could easily mean we've got a lot of players looking for a position or some positions just looking for a player, but it's May so I'm going to go with the more positive spin.

12. Chris Conely will be the holder.
Great for Chris. He's earned it.