Share All sharing options for: I Can Guarantee You that Pete Boone Would Have Never Done This

I realize this is a few days late, but it's still worth some space on this here corner of the internet. This past weekend, a longtime reader and contributor to the Cup - BeardedGinger here, @blakekirbyreb on Twitter - was, via a simple and seemingly frivolous use of Twitter, able to meet both head Ole Miss football coach Hugh Freeze and athletics director Ross Bjork.

Here's how it went down and, yes, it all really is as simple as it seems.

First, @blakekirbyreb tweets this sometime during the accidental doubleheader between Ole Miss and Arkansas this past Saturday:

Not much to that, right? It's one of those things you see people tweet a lot in SEC country ("Hey @CoachHughFreeze can u give me a RT cuz it is my birthday thanks HOTTY TODDY!!") and it's definitely something you hardly expect to elicit any sort of response, especially a personal one.

where are you? "@blakekirbyreb: @RossBjorkAD needs to come out to right field to my tent for the baseball game"

That's straight from the iPhone of the athletics director himself, and likely the product of his own thumb-mashing. Bjork appreciated the shoutout enough to take the Rebel student up on his offer. He made his way out of his box and over to right field where he approached and introduced himself to several Ole Miss fans and students. No, really, he did that, and there are photos to prove it. 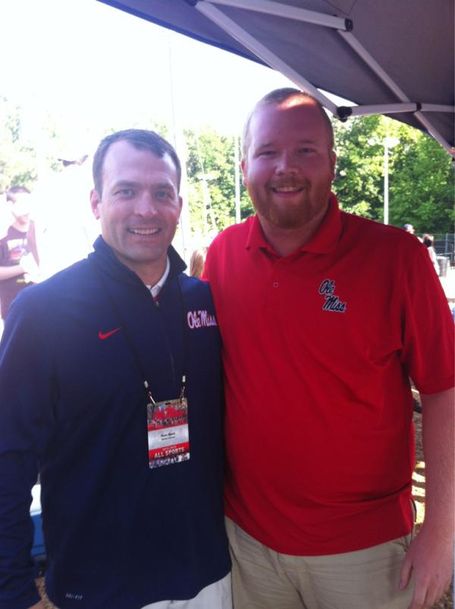 We've long since said that the Ole Miss student section is, hands down, the best in all of college baseball. Ross Bjork likely agrees with this, and felt he had to experience the right field of Oxford-University Stadium himself. And what a better way to do that than by accepting a somewhat personal invite from a complete stranger who is nearly two decades your junior?

Don't get me wrong; I'm not making fun of what Bjork did. I'm simply illustrating just how unusual it is for an athletics director of an SEC school to a) personally respond to a twitter follower and b) mingle with students during a major athletics event. It's certainly something that we as fans, and especially as Ole Miss fans, wouldn't expect. While it's our money they're after, our eyes their advertising partners are trying to lure, and our asses they want plopped atop their bleacher seats, we're accustomed to being somewhat ignored. We don't make the big decisions, we don't allocate funding here and there, and we don't hire or fire anybody (all for, mostly, good reasons), but we are, in a sense, the lifeblood of the programs for which we cheer. Ross Bjork gets this, and we're noticing.

He also gets Twitter. Which, come on, is pretty cool. Right?

In the long run, this little act of his is highly inconsequential. For now, though, it's satisfying to see someone charged with essentially serving as the CEO of the athletics department of our alma mater making an effort to show his fans that he, at the very least, notices us.

(Oh, and a day later, Hugh Freeze showed up to say hi as well. Again, It's goofy, but these are the kinds of things that we fans really, really appreciate.)