While I am excited about the Dance in general and genuinely looking forward to what the Roundball Rebels will do in the NIT, I can't find myself getting to into either bracket. I haven't the desire or gumption to research the teams, players, coaches and programs involved to make the most accurate, over-analyzed picks I can. So I need something that I, as a bloggeur with a desk job, can get legitimately excited talking about this March, and I need that to be something that the lot of you, either Ole Miss students or Ole Miss Rebel fans in situations similar to mine, can get legitimately excited about as well.

What could that be, exactly? Lunch. That's what.

Yes, you haven't been mislead by the title; this is 2012 Sandwich Madness, and your bracket is after the jump. 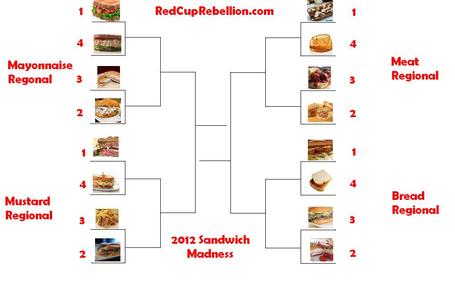 The regions and seeds are as follows:

The last four out, if you're curious, were the Veggie sandwich, French dip, Muffaletta, and the Gyro. The veggie had some nasty, drippy grilled mushroom on it, the French dip's gravy sucked, the Muffaletta had a down year, and the Gyro isn't technically a sandwich. I mean, c'mon, if the Gyro is a damn sandwich then so is a soft taco or a burrito, right? Of course I'm right. Idiots.

Okay, so here's how this is going to work. Today we're going to vote on the Mayonnaise and Mustard Regions. Just list your picks in the comments for BLT vs. Tuna; Chicken Salad vs. Ham; Reuben vs. Turkey; and Banh Mi vs. Club. I'll tally them up, update the bracket, and then tomorrow we'll work on the meat and bread regions. Got it? Good. Happy voting.