The Ole Miss baseball season is nearly upon us. Less than two weeks from now, the Rebels will have played their first game of the 2012 season against TCU in Fort Worth (more like NO WORTH amirite?).

If you're a good Rebel like myself, you may have already received a little something in the mailbox today. Check it out after the jump. 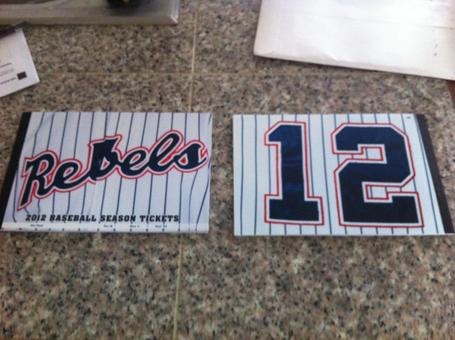 That would be the front and back of the season ticket books for this season. Pretty sweet looking in my opinion. The tickets feature players like Matt Snyder and Alex Yarbrough either in action or half of their face on the side of the ticket.

Thirty one home games and 25 road trips await eager Rebel fans hoping for a return to the postseason. Highlighting this year's schedule are home series against preseason #1 Florida, Arkansas and LSU. Southern Miss will also make a one game appearance at Swayze Field.

For what it's worth, Mrs. One Man To Beat and I will be on the third base side, Sec. M, up near the front if you want to stop by and chat. I can't promise we'll be at every game, but I can promise we'll be more than happy to talk baseball as long as you bring us food or a red cup. Priorities people.

So what do y'all think of the ticket design for this season? Post your comments below and once you get your tickets, feel free to post where you'll be sitting this season. If it's the OF, fully expect a visit from yours truly.