Share All sharing options for: Statistical Analysis: Nutt Era vs. 2012, on Offense

In part one of this two part series, Ghost looked at the statistical improvements from 2011 to 2012. I think that served a good purpose, but when looking at offense I wanted to give Nutt the benefit of the doubt and average in his good years along with last year, a season when the team simply gave up and was humiliated by Kentucky and Louisiana Tech. It was interesting to go back and look at stats from years past, as I found out some interesting things I hadn't really realized.

Obviously, this year's offense was much better than that of last year, but I was amazed to find out that this team is also only 177 yards away from having outgained the 2008 team, Nutt's first and best. Sure, one would expect that with the number of plays we've run in comparison to that year, right? Well, as it turns out, the Rebels have run just 16 more plays than they did in 2008 (876 to 860). It's likely that they will surpass the yardage total of that season having only run 30 or so more plays. That's pretty phenomenal considering the talent on our 2008 team. This offense is talented, but I'm not sure they compare to a team with Mike Wallace, Michael Oher, Dexter McCluster, a freshman Brandon Bolden, Shay Hodge, a productive Jevan Snead, and many others.

As Ghost highlighted in his column yesterday, Bo Wallace has been quite strong. I realize he has struggled at times with turnovers, and a good number have been his fault, but I'm pleased with how he performed behind an improved-but-still-not-good offensive line. Remember, Wallace was sacked 33 times. He's getting pressured but getting the ball out. Sometimes that leads to interceptions, but sometimes it leads to huge gains. The offensive line can't protect him long enough on deep routes, so he does what he can, given the pressure.

But I digress. Let's look at the overall statistics and their comparison. You'll have to click to biggify since there's a lot of information there. 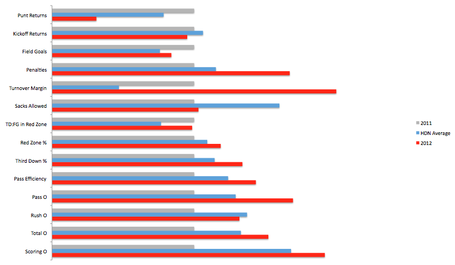 As you can see by the table, every single offensive statistic improved aside from rushing offense (which decreased by six yards per game), sacks allowed, and return averages. As I said, the yardage totals are there, but the more encouraging thing was the stats that really scream improved coaching. Pass efficiency shot way up, a product of playcalling that emphasized high-percentage throws and being sure to take what the defense gives you instead of always trying to force things. Third down conversion percentage jumped to a staggering 44.2%, good for fourth in the conference. That's higher than any year under Nutt, and it's a great number. Any offensive coach in the country would take that conversion rate all day long.

Also, despite the thoughts of our fans, the red zone offense appears to have been quite strong as well. Scoring at a 90.2% percentage in the red zone puts the Rebels second in the conference for 2012. More than that, the TD:FG ratio of 2.07:1 is very impressive. We're not just kicking field goals in the red zone; we're scoring touchdowns (read: more points).

But the most interesting stat to me is that of penalty yardage. In years past, Ole Miss appeared to struggle with dumb personal fouls after plays, etc. That wasn't the case this year as the Rebels ranked second in the conference with just 34.5 penalty yards per game.

Obviously, the return yardage killed us. The kickoff average actually didn't drop that much (part Jaylen Walton, part the fact that kickoff averages are roughly the same around the country), but the punt return average went way down. That's obvious to anyone who watched games this year. After the team fumbled several punts, players (mainly Korvic Neat) decided that attempting to field punts wasn't the solution. Oftentimes Neat would let punts hit and roll ten to twenty yards, a crushing, crushing thing. Freeze and company have to work on that this offseason, and I'm sure they will.

That's the encouraging thing about this. These results were in year one. A year where nothing was expected and the talent on the team doesn't feature tons of juniors and seniors destined for the NFL. This staff will have time this offseason to work on fine-tuning things instead of having to install all new schemes. They'll work with Bo Wallace on his decision making. They'll work with Jeff Scott and try to get him to take what's given to him instead of trying to bounce things outside when there's no room. They'll continue to improve what could shape up to be a pretty good offensive line. This isn't the same situation as 2008. In 2008, Nutt inherited a team full of experienced, NFL-bound talent but no youth. This team is the opposite. It has some players who will play in the NFL, but they're mostly young. The next two years could be special, and the idea of three special years to start a coach's career at Ole Miss is something to celebrate.