Share All sharing options for: Statistical Analysis: 2011 versus 2012, on Defense

To recap the 2012 Ole Miss Rebel football season, Juco and I are taking a look at how this team performed on the field in year one of the Hugh Freeze experiment and comparing those results to 2011, the final year of the Houston Nutt regime and, arguably, the worst football season in Ole Miss Rebel history. Sure, we won't inform you of anything you didn't already know - namely that last year was awful - but I think you all are going to enjoy our attempts to quantify our team's progress since then.

Today, I'm looking at the Rebel defense as well as what we're calling "defensive special teams." Included in this analysis are scoring defense, total defense, rush defense, pass defense, third down defense, red zone defense, sacks, interceptions, fumble recoveries, punting, punt coverage, kickoff coverage, and turnover differential. We'll look at the raw data on all of the above from 2011, compare it to the same for 2012, look at how much each category has improved or regressed from 2011 to 2012, then develop what I call the "betterness ratio" which, really, is nothing more than a way to compare otherwise incomparable statistics.

A bit more on this "betterness ratio" idea: the problem when looking at how a team improves overall the varied measures that go into statistics. How, for example, does one compare points to sacks to yards? To do this, I've opted to use a very simple measure of improvement in each statistical category. This measure is calculated by dividing one year's numbers into the other based on whether or not an increase or a decrease in a statistical measure counts as an improvement. For example, since fewer passing yards from one year to the next would signify an improvement, the "betterness ratio" is determined by dividing 2011's pass defense numbers by those of 2012; since more sacks from one year to the next would be an improvement, one would divide the 2012 numbers by those of 2011.

This way, 2011's team as an aggregate can be looked at as a benchmark for 2012. Instead of looking at the improvement category-by-category, this allows us to establish 2011's statistics as "1" and overlay 2012's "betterness ratios" (Is that even a good term to use? It sounds clunky and dumb.) to see how they compare.

Does this make sense? No? It will in just a second, I promise, because it's one of those things that's so simple that there aren't words in English which can get the point across. Numbers and graphs though? They'll do the trick just fine.

Here are the figures from 2011 and 2012 in the statistical categories we're looking at in this exercise:

Already you can see some big changes from 2011 to 2012. Our total and scoring defenses improved slightly, with our rush defense accounting for much of the improvement from 2011 to 2012. The team reeled in more turnovers, both as fumbles and interceptions, and had a great deal more sacks in 2012 than in 2011. 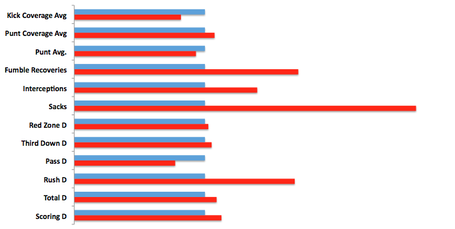 This is the different "betterness" scores, in red, laid over scores of "1", in blue, which demonstrates 2011 as a baseline by which 2012 is measured - I'm sure there's an actual statics term for this practice of which I'm completely unaware. The turnover differential was left off in this graph beacuse that'd have skewed the results to an extent which would render this whole thing illegible. Suffice it to say that we improved greatly in takeaways from 2011 to 2012, as demonstrated by our improved fumble and interception numbers.

What really sticks out at first is, obviously, sacks. In general, the defense this past season was much more dynamic than its 2011 counterpart, and did a fine job of making big plays, not the least of which came in the form of 34 sacks, good for second in the SEC behind South Carolina.

But the real story this tells is this defense's ability to stop the run as compared to its predecessor. On average, Ole Miss opponents rushed the ball for 91.6 fewer yards per game in 2012 than in 2011. Of course, this has a lot to do with this team's improvement on offense (which we'll look at tomorrow), which allowed the Rebs to establish several late-game leads forcing the opposition to hit the air; but I posit that this team was simply better at stopping opposing halfbacks this past season.

Because of this defense's ability to stop the run and this offense's ability to keep the games interesting well into the fourth quarter, teams were forced to throw against us in a way they weren't in 2011. That could explain both the regression in pass defense (opponents passed for, on average, 57.3 more yards a game on the Rebs this year) as well as the increased number of interceptions and sacks. This team forced people to throw and, in doing so, they put themselves in a position to make more big plays.

As for the special teams measures, the Rebels were actually slightly better in punt coverage in terms of yardage, despite being burned for a few big plays on the year. The team did regress some on kick coverage and punt yardage. I do think then that it is safe to say that we'll be more than happy to have Andrew Ritter and Tyler Campbell leading the special teams next year.

Overall, the defense improved tremendously from 2011 to 2012, especially regarding big plays. With the Rebels returning a significant bulk of their starting defense for 2013, it isn't too unreasonable to expect continued improvement on that side of the ball for Ole Miss.

Tomorrow, we will look at the Rebel offense, to see how much this team improved on that side of the ball in Hugh Freeze's first year at the helm. Surely you'll all enjoy that.