Oh, we forgot to do all of these things? Well here they are, rolled into one post!

Happy Saturday y'all. Whether you're in Baton Rouge or elsewhere today, there's a lot going on for Ole Miss fans that we'd like you to be aware of.

First, the Rebel roundballers won last night, improving 3-0 on a convincing victory over the Arkansas-Little Rock Trojans. Derrick Millinghaus led the team in scoring with 19 points, to which he added four rebounds, five assists, and three steals. Four other rebels scoring in double digits on the night and Reginald Buckner notched a double-double, scoring 10 and pulling in 11 rebounds. Most importatnly, the team was right around 74% on free throws, largely due to Millinghaus. If this can be maintained, then this will be a tough team for any opponent to defeat.

As for the statistical analysis of our team versus our SEC opponents that I've done on the season thus far, here's how we stack up against LSU: 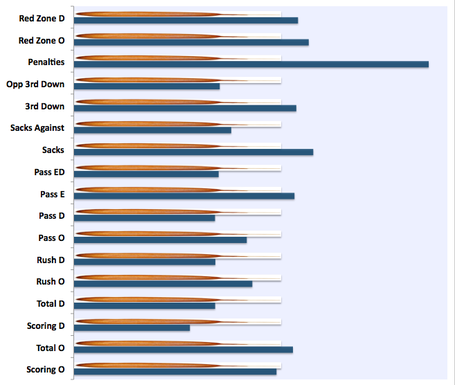 You may need to click to biggify this, and I think you should because you'll see just how our blue bars stack up with their stretched out little corndog bars. Get it? Because, you know, people say that LSU fans smell like a fair? You know, corn dogs?

Anyway, you'll see that Ole Miss' advantages against LSU are few and, where present, not too significant. Ole Miss plays a little better in the red zone (Ole Miss has the best red zone offense in the conference), has the better passing offense, and is much less penalized (Ole Miss gives up the fewest penalty yards per game in conference).

Where LSU excels, expectedly, is on defense. Their pass defense is the best in the conference, and their run defense should be able to keep our run offense in check as Georgia and Vanderbilt were able to.

And finally, here it is, your Ole Miss vs. LSU Open Thread: